Overall, this game warrants a solid score for its many attributes - decent artificial intelligence (especially the goalies), nice animation, entertaining play modes, and multiplayer. But unfortunately the automatic player-switching throws a wet blanket over the fun.

When it comes to soccer, it's slim pickings for Dreamcast owners. You either take your chances with Sega's arcade-inspired Virtua Soccer 2, or you wait. And with no chance of EA releasing FIFA for the DC, Striker Pro 2000 could be your only hope. But be aware, It may look great (most DC games) and move nice, yet just below the surface gameplay issues are looming.

While Striker Pro 2000 is new to the Dreamcast, developer Rage has been producing soccer games for various platforms for a long time. The company's expertise in the genre is well known, especially in Europe, where soccer is super popular. For its latest offering, Rage has scored a UEFA license. This allows the company to use several European and International clubs - but not their specific team names. It's hard to understand, especially for casual fans, but in a nutshell there are around 130 different teams that compete in the UEFA (Union of European Football Associates) structure model. For a more in-depth explanation, refer to our preview of the game.

What's interesting or unique about Striker Pro 2000? Aside from the exclusive selection of European teams, you have the ability to customize your favorite club. Don't like the boys from Manchester wearing white socks? Change them to black. Don't like their shirts? Fix those as well. Mix and match uniform patterns and colors to your heart's content. It's not exactly a groundbreaking feature, but it's cool. For the ambitious, there's an option to create your own league as well as special competitions. If you're really into sims, the ability to make your own "super league" might be entertaining. For me it's one of those features I'll never use, but it's nice to have anyway. The same goes for building tournament brackets. If you're into that level of editing, you'll like the flexibility Striker Pro 2000 provides.

Customizing uniforms and building leagues is fine, but the training and certification mode is truly the most unique portion of this game. You must pass a series of skill tests to unlock hidden modes and extra teams. The tests are as beneficial as they are entertaining. They let you experiment with special moves, gain confidence in your ball handling, and, if you're lucky, unlock the hidden teams. The certification mode is made up of six tests, each containing ten stages. These include taking shots on goal, passing drills, two-on-one offensive drills, and several others. It's also notable that the tests take place in an authentic training academy nestled in a country-club-like atmosphere. I found it helpful to use the open field to practice special moves. In this game, you can't rely on the speed burst alone to get around defenders. Using fancy footwork and knowing when to turn it on is vital, and the training mode is the perfect place to gain those skills.

Other game modes include friendly, classic match, super trophy, league, and knockout. With the exception of classic match, all are variations of tournament-style play. Four additional modes exist, but they can only be opened by completing the certification mode. The classic mode is great because it places you in tight game scenarios from years past. I'm sure for most Americans it'll be an education as well. Don't take it personally - you wouldn't expect someone from England to remember key NFL games would you?

How does Striker Pro look? Nice - not jaw-dropping but decent. The shading, textures, and lighting effects are well done. Night games reveal the extent of the detail. Shadows actually rotate around the players when they move in and out of the light. Overall, the graphics are crisp and sharp, with few flaws. Still, having seen what the Dreamcast is capable of (NBA 2K, for example) I was hoping for more. And without getting ahead of myself, "hoping for more" seems to be what I was feeling throughout this entire game.

The animation is definitely top-notch. The transition from jogging to sprinting is smooth and natural. I can't think of any other soccer sim that does it better - possibly FIFA 2000 for the N64. The footwork is equally impressive. The players slow down to perform a maneuver, then they naturally speed up once they're past the defender. A couple of things are not so great, however. The aggressive slide-tackle lags make the players appear to be in slow motion. Plus, the tackle shoots them down field too far. Otherwise, headers, stutter steps, 180-degree kicks, and a load of other maneuvers look quite lifelike. The goalie moves are fantastic as well. They get way up in the air for spectacular saves.

OK, so everything is great, right? Well no, it's not all rosy. While the game has its bright spots, one really annoying feature keeps me from loving it completely. The computer automatically switches control to the player closest to the ball. Every soccer game lets you switch manually. This is the way it should be. It's infuriating to have your control removed at key moments. For example, you're just about to intercept a pass - but wait, now your guy is running in a new direction? The computer just changed control! Meanwhile, you've run a key defender out of the picture because you weren't aware you had the reigns. You get the idea. It doesn't ruin the game, but it forces you to play in a new and not neccesarily welcome way. At the very least, it forces you to hold formations. Aside from that, the other controls are effective. Performing the through-pass, clearing the ball, shooting... they all work fine.

A couple of more gripes. The sound is layered in a very obvious way. Basically, you have the constant roar of the crowd interrupted only by the announcers comments. The sound of the ball being slapped around is strangely absent. Oh yeah, I don't need to watch a player jog to the corner for every corner kick. It's a little thing but it eats four or five seconds of time.

Overall, this game warrants a solid score for its many attributes - decent artificial intelligence (especially the goalies), nice animation, entertaining play modes, and multiplayer. But unfortunately the automatic player-switching throws a wet blanket over the fun. Honestly, if it weren't for that, It would be my new favorite soccer game. For folks weighing the options between this and Sega's Virtua Striker 2, the differences are obvious. VS 2 offers a very limited, unrealistic arcade experience, while Striker Pro 2000 provides all the options and features any sim fan could want. Let's hope the next edition will allow manual player-switching. 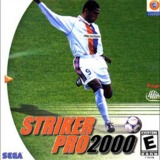