The game is wildly unorthodox in almost every conceivable respect, though its aesthetics and mechanics are awesomely polished and inventive.

Stretch Panic is a game that few development studios could have possibly conceived of, let alone brought to market. The recently released game was developed by nigh-legendary Japanese studio Treasure and was brought to the US market by Conspiracy Entertainment. The studio's ever-growing cult following owes Conspiracy a debt of gratitude; Stretch Panic is a game that would have never seen the light of day in the US had the publisher not had some kind of unique vision or agenda. The game is wildly unorthodox in almost every conceivable respect, though its aesthetics and mechanics are awesomely polished and inventive. As such, it will definitely appeal to the niche market for which it was released.

Stretch Panic tells the story of a young girl called Linda. Linda lives on the outskirts of town with her 12 sisters, all of whom are extremely vain. Self-absorbed as they are, they've designated the kind, industrious Linda as their errand girl, sending her on all types of food and cosmetics runs. One day, Linda returns from such a run to find a strange truck with an obscure logo parked in front of her house. Immediately knowing something is amiss, she runs to the door. Demons of vanity, as it turns out, have possessed her sisters, mangling their forms and distorting their souls. A similar demon (with a predilection for stretching things) has also possessed Linda's lucky scarf, turning it from a loved memento into a deadly magical weapon. Armed with this, Linda soldiers into Limbo to rescue her sisters from the demonic possession.

Luckily, Stretch Panic's fanciful premise is supported by a set of interesting game mechanics that let you effectively control Linda and her animate scarf. The most radical concept present in the game is your ability to manually deform--by means of the magical hand-shaped scarf--any element in the game's environment, be it an enemy or a piece of level geometry. You can literally pinch anything and pull it as far as it will go before letting it go and having it snap back with suitable violence. Doing so constitutes your primary mode of attack, though you'll also use the scarf to move about in interesting ways. You move Linda around by means of the left analog stick, though she is about as maneuverable as a tank. As such, you'll be doing most of your moving around as the scarf, which you control with the right analog stick. The scarf is much more mobile than Linda herself, and when used effectively, it lets you enact all kinds of offensive moves and defensive tactics. All of the auxiliary functions are mapped to the shoulder buttons, including the lock-on (which conveniently points out ideal grab points) and free-look functions. All of this is hard to get a handle on at first; controlling a young girl and her demon scarf has no applicable analogy in real life, after all. However, once you get into Stretch Panic's groove, you'll find the action of strafing and grabbing (which is what the game ultimately comes down to) is quite intuitive and engaging. The game's lock-on function is a bit flaky, especially when you're amidst large, constantly moving polygons, but this is a relatively minor issue and luckily the only notable flaw in the mechanics.

What may perhaps turn many off to Stretch Panic is its unorthodox structure. In essence, the game is composed of a series of boss battles, which you access by means of a classic hub space. Pitched like boss battles are supposed to be, each battle the game pumps forth always manages to outdo the one before it, from both an aesthetic and a design standpoint. One will have you rearranging the face of a large demon, while another will have you pulling each end of a mechanical pendulum-like woodpecker abomination. The astounding thing about these sequences is that however whacked-out the aesthetics get, the game mechanics remain consistent throughout. Yet the mechanics are distinct enough to give each sequence its own feel.

In any event, you need to have a certain number of points to attempt any given boss battle. You can acquire points in two ways: by venturing through EX worlds and battling zakos or by scoring special hits on enemies. EX worlds are areas that you can enter for zero points, and they're populated by zakos--the women of mutant proportions that many have come to associate with Stretch Panic. Defeat zakos, and you gain points, which you can use to enter boss battles and execute your special attack. It's in these EX worlds that Stretch Panic comes closest to resembling modern 3D action games, though the EX worlds are relatively small and tightly focused. Still, they're a good place to seek respite from the barrage of battles.

As if the avant-garde design weren't enough, Stretch Panic boasts some pretty challenging visuals as well. Everything seems to be composed of basic geometric shapes, which lends the character designs a very iconic look. However basic their composition, though, they're among the most well-conceived designs gaming has recently seen, if you can get over their lack of reliance on traditional game imagery. Colors, furthermore, are bright and basically primary, lending the world a lively, young feel. Couple this with the playfully macabre imagery tastefully spread throughout, and you'll find it easy to sink into the whimsical world Treasure has crafted.

Many people may have trouble getting into Stretch Panic because it's a fairly challenging game, though that doesn't mean it's hard to play. Absent are all the elements that we have come to associate with the platform genre, which is what the game most closely resembles. The game is entirely unique, and it serves as proof that Treasure is conscious of the conventions of game design and that it is willing to mess with them in meaningful ways. Fans of bra snapping, Treasure, or both will do themselves well to check this out. 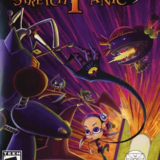