It's in the gameplay that Street Sk8er really falls flat.

It's in the gameplay that Street Sk8er really falls flat. It's not because the game itself controls poorly, but rather there simply isn't a whole lot to do. You race along, and when you come across a ramp, you can press a direction along with the jump button to execute a trick. That's it. You go along, jump off jumps, and land rail slides, and so long as you make it to each checkpoint before the timer reaches zero, you're good to go. Well I shouldn't say good to go, because in order to progress to the next stage you must accumulate enough points, which you get for the rail slides, tricks, and such. The only real challenge to the whole game is in knowing how many tricks to pull off in the various half-pipe-like areas within the course before pushing on. It doesn't matter how fast you get through the course if you don't rack up enough points on the way to the goal line. You'll simply have to redo the course.

As you proceed through the game, you unlock levels that you can later go back to and play freely in what's called free skate mode. The game also has a vs. mode for two players, but sadly it's not the two-player simultaneous split-screen mode that we've seen in just about every other racing game. Instead, you and a second player alternate turns and compete for points.

Visually Street Sk8er is nothing special. The 3D polygonal boarders move and look OK, as do objects within the 3D courses, like the rails, ramps, and other obstacles. The most impressive aspect of Street Sk8er is the sound. The game has a great soundtrack featuring bands like Less than Jake, Gas Huffer, and H2O, just to name a few. But the announcer who says things like "You're smoking" when you pull off a trick is a little annoying.

In the end, unless you're a skateboarder who's been eagerly awaiting a boarding game, I'd say pass on Street Sk8er (plus, there are two more boarding games announced for the system). I am honestly not a big skater, but I've played more than enough video games to know that this game is boring. And even if you are a die-hard skater who has been waiting for a game representing the sport, I'd highly recommend renting Street Sk8er before buying it, especially since you'll be able to see just about everything the game has to offer after playing it for the better part of a day. 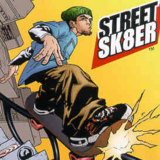