This faithful port of Third Strike comes with all of the pluses and minuses of the arcade version, including tight, fun gameplay coupled with a steep learning curve.

Street Fighter III has long been a favorite of the hardcore crowd, but it's a game that never managed to match the wild mainstream popularity of its predecessor. Deeply technical and complex, SFIII was, for the most part, underappreciated when it was first released in the late '90s, but it nonetheless found a place as a favorite amongst tournament-level players. Street Fighter III: Third Strike was the last arcade update of the game, and it now makes its way onto current-gen consoles. This Online Edition is a practically flawless port of the arcade game, bringing with it all the nuance, complexity, and sheer fun of the original, as well as its various character balance issues.

It's easy to see why Street Fighter III never reached the stratospheric heights of Street Fighter II. Street Fighter III ditched the majority of the characters that players had grown to love, replacing them with an eclectic group of newcomers who, for the most part, looked and played little like the Street Fighter II and Alpha series alumni. The game also required you to have a high level of technical proficiency to master it and introduced some mechanics and concepts that were new to the genre at the time. EX moves--supercharged versions of normal supers--were first introduced here, but SFIII's biggest gameplay innovation was the parry system, a high risk/reward mechanic that let you negate attacks by pressing forward (or down for low attacks) the instant a hit landed. The parry system completely changed the way Street Fighter played, forcing you to significantly lift your skills to stay competitive in a world where any attack could be parried for no penalty.

Because of its intricacies, the game may not immediately appeal to those used to the accessibility of newer fighting games. Street Fighter III has a steep learning curve and certainly isn't as accessible as Mortal Kombat, Marvel vs. Capcom 3, or even Street Fighter IV. Third Strike Online is a game that demands dedication, but the payoff is a tight, exciting experience that rewards skill, timing, and strategy.

Those used to Street Fighter II or IV will find III's cast tough to come to terms with initially, but spend enough time with them and it becomes clear that the roster is the most diverse in the entire Street Fighter series. Ryu, Ken, and Chun-Li are the only representatives of the original World Warriors, while III introduced characters like Makoto, Dudley, Ibuki, and the Hong Kong twins Yan and Yung. The other brawlers who make up the full roster of 21 characters range from the familiar (French fighter Remy, capoeira fighter Elena, and Ken trainee Sean) to the downright strange (the one-armed Oro, the flexible Necro, and the batty Twelve), giving the game an impressive level of fighting-style diversity.

If you played Street Fighter III: Third Strike in arcades, then you'll be immediately comfortable with Online, because it captures the feel of the arcade version well. Characters, timing, and inputs all feel right, so those with proficiencies on a real-world cabinet will find their skills transferring easily. But accurately emulating the arcade experience also has its downsides, specifically with character balance. As in the arcade version, some characters in Street Fighter III: Third Strike Online are overpowered compared to their counterparts, with no new balancing implemented in this latest version of the game. Chun Li, Yun, and Ken have long been known to be the beasts of Third Strike, and it's the same situation here. Tournament-level players have had more than a decade to get used to this, but newcomers may get frustrated once they start to encounter the beasts in online play.

To the game's credit, Third Strike Online features a decent number of offline training options to get new players up to speed on its intricacies. Apart from the stock-standard free sparring mode where you can set your AI opponent's basic moves, there's a specific mode just for parry. In this extremely helpful mode, you can "record" the moves of an AI character, before switching back to your own fighter to see if you can parry the attacks. Third Strike Online also features a trial mode, which is essentially a way for you to become comfortable with some of the more complicated combos. Each character gets only five trials, however, which means you're only scratching the surface of the offensive manoeuvres available. The trials also aren't that user-friendly. You're given a list of moves to perform, but there's no way to figure out the correct timing of the inputs since there's no option to view what the combos should look like when executed. The parry trials are the most interesting of the lot, culminating in the near impossible task of emulating the famous EVO Moment #37, one of the most amazing events in pro-gaming history.

When it comes to offline play, the game doesn't feature much aside from single-player and two-player matches, but it does try to liven up the single-player component by adding in challenges. These challenges can be as simple as throwing a set number of fireballs, performing a midair parry, or engaging in dozens of other activities in the course of playing. Performing challenges earns you points that you can use to unlock art, character designs, and more.

Much noise has been made about the online aspect of Third Strike, with the game using GGPO, the community-made netcode that tries to minimise the effect of latency in matches. It does this by running two copies of the game, with your input registering on your own copy without having to wait for your opponent's. If there's a discrepancy, the system rolls back and figures out which input arrived first and then adjusts the match accordingly. This is all supposed to happen so quickly that you don't notice, and for the most part, the online experience in Third Strike is smooth and runs well--games with low to medium ping run with a minimum of fuss. But bad connections can still result in jerky, laggy games, and it's tough to get a smooth experience with anything that shows a red connection. You have the option to turn up the GGPO delay, and while it makes things a little more bearable on slow connections, it's still not a smooth experience.

Bad games from bad connections isn't a new phenomenon in gaming, but unfortunately in Third Strike Online's case, there's no way to select matches via region or location, which means even gamers in high player population centres may be forced to sit through a high ping match occasionally if they're in an open lobby. Trying to get into a ranked match also proves to be problematic. While finding opponents in the game's player or tournament matches is easy, ranked matches are much tougher to find, with the game often hanging on trying to find opponents for several minutes.

When Street Fighter III was first released, it was one of the prettiest fighters around. But since Third Strike Online isn't an HD update of the original, the graphics, while smooth and featuring large, colourful characters, aren't on par with the graphics in more modern fighters. But what Third Strike Online lacks in looks it more than makes up for in adaptability, with the game letting you tweak an impressive number of gameplay options. You can switch off throws, supers, EX moves, parries, and jumps, and even change the timing required for the input of some moves.

For a game that's over a decade old, Street Fighter III: Third Strike Online holds up well against its modern-day counterparts, which is a testament to its outstanding fighting mechanics and tight controls. It may have a steep learning curve, but the training additions to this version make it easier than ever to get into, and while online play isn't always smooth, it still delivers a mainly lag-free experience. If you've ever wondered what all the Street Fighter III fuss was about, then there has never been a better time to find out. 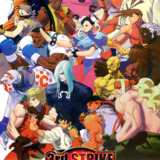 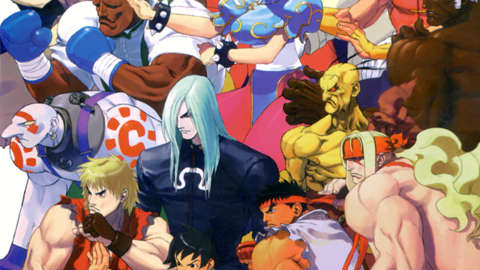 A popular arcade release, Third Strike features a variety of characters, technical level of gameplay, and an evasion and counterattack system.

8.7
Sign In to rate Street Fighter III: 3rd Strike - Fight for the Future