There is definitely a lot to Street Fighter III.

Calling Street Fighter III the third game in the Street Fighter series is just plain silly. Let's face it. Between all the Alpha games, all the vs. games, and all the "upgrades" to Street Fighter II, we've seen more games in the past decade bearing the name Street Fighter than we've probably needed to see. The journey to game number three has been on a long hard road. Every time anyone hinted at the possibility of an SF3, it always turned out to be another offshoot of the Street Fighter line. Well, Capcom has finally graced the world with its "third" Street Fighter, as well as two upgrades to the game, Second Impact and Third Strike.

The arcade releases of the Street Fighter III games have been met with mixed reactions. Many people were disappointed that only Ryu and Ken made it to the third game (though Akuma was added in Second Impact, and Chun-Li is in Third Strike), and the new characters just didn't seem as interesting as Guile, Dhalsim, and the rest of the SF2 gang. Others couldn't get over the slow game speed - after years of playing games like Super SF2 Turbo and Street Fighter Alpha, many players felt that going back to such a slow speed made the game seem like it was stuck in the mud. The game did add a parry maneuver that, when mastered, really changed the face of the game. Parrying an attack caused the attacker to seize up for a brief moment, leaving plenty of room for a counterattack. But even with this bit of innovation, many people stayed away from the game entirely or simply didn't feel like learning the styles of the new characters. As a result, Street Fighter III Double Impact, which contains both the original Street Fighter 3 and the Second Impact upgrade, may find a larger audience on the Dreamcast.

Street Fighter III eschews the more cartoony art style - found in, say, the Alpha series - and strives for a slightly more realistic look. Since the arcade game ran on Capcom's CPS3 hardware (all the other recent Street Fighter games have run on the older CPS2 system), there are many more frames of animation to be seen. Elena is, of course, the best example of this, as she is constantly moving around in all of her stances. Unfortunately, Elena's fluid animation makes the rest of the characters seem a little stiff by comparison. All in all, the game appears to be an excellent port of the arcade version, with absolutely no waiting for things to load between rounds or fights. The arcade version's sound has also been well duplicated.

Controlwise, the game plays as you would expect a 2D Capcom fighter to play. So you may not want to use the default Dreamcast controller with the game, as the L and R buttons are definitely less than optimal. There are a couple different controller choices on the market, our favorites being Agetec's joystick and the ASCII Fighter Pad FT, which is only available in Japan. Both of these controllers make playing Street Fighter III a much better, and in the case of the joystick, truer-to-the-arcade experience.

There is definitely a lot to Street Fighter III. If you're one of the people who has shunned the game since its release in the arcade, you may want to give this collection a chance. Since you won't be paying per play to learn the game's new characters, it's easier to just jump into the game and start messing around. You just may be surprised. However, you may just want to wait for Third Strike, which is currently available in Japan and is releasing here later this year. 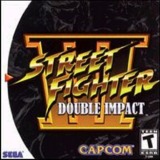