The game's graphical prowess and arcade-perfect gameplay combined with its cache of bonus modes makes Street Fighter Alpha 3 the latest standard for 2D excellence on the PlayStation.

Street Fighter Alpha 3 has a total of 34 characters, four of which become unlocked only after you play through the game's various modes. The alumni from Street Fighter Alpha 2 are joined by four new fighters: Karin Kanzuki, Rainbow Mika, Juli, and Juni. However, only Karin and R. Mika can be considered truly new since both Juli and Juni have moves and animations derived from Cammy. For Street Fighter Alpha 3, Capcom also brought back old favorites like Guile, E. Honda, Blanka, Balrog, Dee Jay, and Fei Long. In an effort to give the game detail beyond any of the previous Street Fighter Alphas, Capcom has given each character a unique ending. This means that bonus characters such as Guile, Evil Ryu, and Shin Akuma all have endings that reflect their origin or purpose. Each of the older characters retains moves from previous Street Fighter games, while a few receive new abilities that are balanced through the "ism" system. Street Fighter Alpha 3 employs the ism system as a method of establishing balance and strategy. X-ism, A-ism, and V-ism determine moves and attributes that carry their own pros and cons. The isms are imbued with advantages and limitations so you will need to discover which mode fits your fighting style most. For instance, the advantage of X-ism is that it has the highest damage rating, but you can't air-block or ground-recover. X-ism also has the upper hand when it comes to guard power - this makes the mode ideal for players accustomed to classic Street Fighter 2 regulations. A-ism, on the other hand, is the mode most players have become accustomed to since the premiere of Street Fighter Alpha. The "A" in the name represents Alpha, where abilities such as air blocking, air and ground recoveries, taunts, a three-tiered super meter, and Alpha counters have all become the de facto expectation. V-ism stands for "variable" mode and is by far the most difficult mode to master in Street Fighter Alpha 3. With V-ism, you have the ability to activate Alpha 2-style custom combos. Aside from the various pros and cons of each ism, there are also a few moves that are ism specific. All of these considerations factor into choosing the right ism for your fighting style.

In a show of bravado reminiscent of Namco's Tekken series, Capcom has added a wealth of extras to the PlayStation version of Street Fighter Alpha 3, making it Capcom's best home conversion ever. When you first enter the game, only arcade and world tour are available for selection. Arcade mode takes you through a regimented plotline for each character, complete with dialogue, sub-bosses, and of course, the showdown with M. Bison. The world tour mode combines round-to-round fights with RPG-like elements, similar (perhaps to the point of seeming a little ripped off) to the Edge Master mode in Namco's Soul Blade. You go on a "world tour" with your favorite characters and gain experience points by defeating challengers from each country. Gathered experience points go towards "leveling up" your character, like in an RPG - the better the fight, the bigger the reward. While your characters level up, they will also be granted access to special ism-plus abilities, such as auto guard, alpha cancel, and damage plus. Once you have earned these skills, you can then augment each ism with abilities previously unavailable in normal arcade play. For instance, X-ism lacks air blocking, but through world tour mode, you can enable an X-ism character to perform air blocking. Character levels peak at 32, while each ism maxes out at level five (considered mastery). As an added bonus, you can take characters you created in world tour mode to fight in versus mode by importing from memory cards. Aside from world tour, you can also unlock the following modes: team battle, survival, dramatic battle plus, and final battle. Kudos to Capcom for making a Street Fighter with more replay value and flexibility than ever before. Visually, Street Fighter Alpha 3 far excels anything the PlayStation has seen to date. While not as effects intensive as the sprite storms found in Guilty Gear, Street Fighter Alpha 3 offers something much more important: animation. Street Fighter Alpha 3 demonstrates that with each successive Alpha game, Capcom has steadily raised the standard in animation and graphical quality. Most character animations brim with a copious number of frames, and as a result, everything is smooth and pleasing to the eye. More importantly, Street Fighter Alpha 3 looks nearly arcade perfect. Even though one can spot animation loss under some scrutiny, the omission is subtle, and the game will look identical to everyone but the most serious of diehards. Additionally, the bonus characters that are only available on the PlayStation are all respectable without the stigma of being just a cheap afterthought. Equally impressive are the super combo animations where the entire screen boils over with special effects and shadow delays. In dramatic battle, Street Fighter Alpha 3 pushes the PlayStation's 2D envelope by having a three-character (two of them have to be Ryu/Ken or identical) fracas with not a hint of slowdown or glitch. To round off the package, Capcom has included ample character art to be admired during the game's surprisingly tolerable load times. The sound effects in general come across as hearty and capture the excitement heard throughout arcades. The voices for the returning fighters bring home a sense of nostalgia previously encountered with Capcom's Street Fighter Collections discs. The most significant audio advancement over previous Alphas is the music itself, which has taken a turn toward more dance-oriented electronics. Most of the songs range from interesting variations of drum and bass to the more frenetic techno anthems Capcom is so accustomed to writing. If you have the sound system to do so, play this game loud.

Capcom might have had a spotless game had it not overlooked one important aspect of Street Fighter Alpha 3: game balance. While it's important to sport a large and diverse roster (34 characters in all), it is also key to make sure that no one character's move or combo can be abused to spoil the versus game. This, unfortunately, is Street Fighter Alpha 3's biggest problem. Characters such as Rolento or Zangief all have techniques that can be exploited to make a versus game extremely frustrating. For example, Rolento nullifies the brilliance of the guard crush system simply by nature of his attacks (his normal attacks do incredible guard-meter damage). Other problems include characters who are ranked fourth tier or worse simply because their moves have such low priority that they're altogether useless. Throw in the volatile world tour creation system, and you have a fighting game rife with gameplay exploits. Even so, most Capcom fans will be delighted with Street Fighter Alpha 3 simply because the home version is so over-the-top with bonus modes and extra characters. We can only hope that Street Fighter Alpha 3 is the first step for Capcom in a trend to make console games exceed their arcade predecessors. 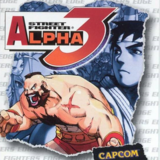