Street Cleaning Simulator is a broken, unrealistic mess that takes a relatively boring concept and makes it even worse.

UK REVIEW--The prospect of Street Cleaning Simulator may not sound appealing, but there's merit in simulation games. It's not possible to try out every job in the world, and for many of us, these games are the only way we'll get to try our hand at farming, surgery, traffic management, or, in this case, street cleaning. The main problem with this game isn't that it's a simulation in which you vacuum up filth from the side of the road; it's that it's a really, really poor game. From the lack of variety to the laughable physics and bizarre AI behaviour, Street Cleaning Simulator could only be considered a simulator in a world where the rules of gravity don't apply, where people melt through the pavement, and where street cleaners walk with an awkward swagger that would put Saturday Night Fever-era Travolta to shame. In short, it's awful.

Street Cleaning Simulator starts off with the promise of many streets to clean. As the owner of a newly established street cleaning business, it's your job to tidy up the city. It's impossible to tell who cleaned up before you arrived; there's no narrative progression, and one can only assume the filth was just left to accumulate because there aren't any other rival street cleaners in the vicinity. So you've got your office (which is really just an email interface to accept jobs from the mayor, motorway services, and occasionally, mysterious businessmen), and you've got a great big orange street sweeper. This truck forms the crux of the simulation, and the attention to detail is worth noting. Everything can be manipulated, from each individual brush to the interior cab light and the windshield wipers. The truck needs refuelling, refilling with water, and emptying whenever too much litter is collected. A brief tutorial explains most of what you need to know, and at first, it may seem rather complicated. It's fine though, because after a mission or two, you soon realise that almost all you ever need to do is drive somewhere and position the brushes.

There are three different sweepers; your starter truck and two that can be purchased after prescribed points in the campaign. The second sweeper has blue brushes and an undercarriage roller (which is pretty much useless), and the third sweeper increases your speed, fuel, water, and dirt capacity. But it doesn't do so by much, and you still end up crawling around the city at a snail's pace, heading to the next identical mission. On the plus side, they're all as nicely-crafted as the starting vehicle, with all the realistic vehicle parts you'd ever need. It's all well and good having indicators, a horn, and a handbrake, but the fact that you never have to obey traffic laws makes them obsolete. In fact, it's downright impossible to obey the traffic laws. After a mission or two, you inevitably give up on waiting at red lights only to cut through traffic, as well as drive through scenery and pedestrians, to provide the shortest time possible between the mission start and the slow, boring task ahead.

The problem with trying to obey the traffic laws is that the other cars don't. You might be patiently waiting at a red light when out of nowhere a deranged driver in a Vauxhall Corsa crashes into you, after pinging off a few dozen other cars. If you're lucky, this causes your street sweeper to grind to a halt. There's no realistic collision detection here. More often than not, though, you and the other vehicle both go flying into the sky. It's hard to believe that in the field of actual street cleaning, the sweepers can bounce 40 feet into the air before landing on their side, clipping through the road a bit and then righting themselves. Often, while making your way to a filthy road, you can spy two cars in the distance, bouncing up and down on the spot like motorised space hoppers and then sinking into the floor, never to be seen again. Pedestrians are just as incomprehensible. If you drive into them, they disappear. Much like the cars, they also frequently sink into the floor or walk through flat, untextured walls. If this were a survival horror game then it might even be creepy. But it's not. It's a street cleaning simulator.

So what of the street cleaning itself? Missions range from "clean up some sand from the gutter" to "clean up some grass from the gutter" by way of "clean up some gravel from the gutter." This cleanup is achieved by driving really, really slowly in a mostly straight line. As soon as you've worked out whether a mission requires water or not (clue: the mayor tells you), it's down to business; drive to a location marked on the map, position the brush, crawl along really slowly. Occasionally, but not often, you get the chance to go off road and clean up sand, grass, or gravel from a pavement. These sections are more taxing because they require you to make a few turns and reverse occasionally. Missions play out to the sound of spinning brushes and revving engines. Sometimes, when you have to reverse, the sweeper makes a beeping sound. This is as exciting as it gets. Some missions are timed, although the shortest limit is one hour (real time), and occasionally, the timer just fails to count down at all. These shots at building tension are so far off the mark that it's unreal.

As the game progresses, missions are made more difficult by being placed farther away from your depot. They're the exact same missions, but they just take longer to get to, which means that for the first time, you have to pay slight attention to your fuel gauge. Sometimes, there's too much to clean up and you can't fit all the detritus in your dirt trap. When this happens, you can either return to the depot and cash the job in for a slight pay decrease, or you can drive to the depot, empty the trap, and then drive back for the rest of the muck. Jobs take about half an hour to finish. There's no option to save mid-mission. The game isn't adverse to crashing. Clearly, there's a problem here.

The most exciting moment in the game occurs in the final level, when the mayor assigns you to clean up a mess that resembles a mixture of blood, vomit, and soot following a New Year's Eve party. It's the only mission that doesn't follow the exact same formula, and that's only because the stuff you're cleaning up is red. It's worth $10,000, almost one-third of the total money you need to earn, but by this point, you won't care. After beating the final level, you're awarded a medal based on your overall company worth and then plunked back into the gameworld, with the suggestion that you might want to explore. There's nothing to do other than look at bouncing cars and smile slightly when a few pedestrians accidentally re-create the Abbey Road cover. Driving around in the painfully slow sweeper is an unappealing prospect at the best of times, and when you're not even earning money for doing so, there's literally no reason to continue playing unless you really love street sweepers. You could always take to the streets on foot, but that's even slower and more pointless than in a vehicle.

It's something of a relief that Street Cleaning Simulator is fairly easy to play and doesn't last very long. Once you learn to ignore the multitude of useless options, it's entirely possible to complete every mission by tapping the up arrow for half an hour and occasionally steering a bit. This leaves one hand free to read a book, eat a sandwich, or face-palm yourself repeatedly. And sometimes it's amusing to rotate the camera and look at the huge traffic jam your street cleaning has caused. It's also not horrifically ugly--the street sweepers don't look bad--and the reflective surfaces on the windshield interiors are pretty cool. The flat, lifeless city leaves a lot to be desired though, and given how slow the game is, you have plenty of time to look at it. There's a weird attention to detail if you search hard enough, such as gumball machines attached to walls and differing shop fronts. But given that the city is as filthy as its roads, there's no reason to check it out.

If it weren't such a slog, Street Cleaning Simulator might be good for the amusement factor, but driving along a curb really slowly is no laughing matter. Even if you absolutely, positively have to play a street cleaning simulation, then this broken mess will disappoint. There's no incentive to play through once, let alone twice. Missing the gold medal by $1,000 hardly encourages you to go through the entire thing again. There are numerous simulator games that do their subject matter justice. This isn't one of them. Maybe one day, someone will make a road sweeping simulation that accurately portrays the noble art. Street Cleaning Simulator is not that game; this inadequate, failed attempt is good for nothing but the garbage heap. 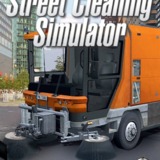