Romance of the Three Townships

Few could have predicted that the niche "social farm simulator" genre would become a hotbed of competition in 2017, but thanks to trademark shenanigans and the surprising success of indie favorite Stardew Valley, that’s where we are today. Publisher XSEED Games is once again looking to capture part of the audience for these charming life adventures with Story of Seasons: Trio of Towns.The game delivers a warm-hearted, relaxing experience that rewards patience and perseverance, even if it does come with a few issues.

The game begins with a flashback to a time where your character had a life-affirming experience at the farm as a young child, inspiring them to dream about running their own farm. Flash forward to the present, where you’re going off with your uncle Frank to begin a new life as a fledgling farmer--though not without some stern disapproval from your father, who isn't convinced you have what it takes to endure the harsh realities of country living. Can you grow from an inexperienced greenhorn into a farming wunderkind, all while forming important interpersonal relationships and eventually finding the love of your life? That’s what Story of Seasons: Trio of Towns is all about. Well, that and shoveling cow manure from time to time.

The basic formula that drives Trio of Towns is familiar by this point: You operate on a day-to-day schedule, with an in-game timer that flows from morning to night each day. Performing activities like cultivating crops, tending to livestock, fishing, mining, or clearing out weeds, trees, and boulders from your fields consumes your stamina, which can be refilled by eating food or resting (and moving on to the next day). Eventually, your hard work will pay off with a bountiful harvest, yielding tender veggies, juicy fruit, and prime produce you can sell to earn money and invest further in your little farmstead. You can also head into town and interact with the local folks, forming important social relationships and eventually, after many moons, finding a nice young lad/lass to settle down with.

The amount of time and effort this will all take depends on the difficulty you choose at startup: "Seedling" difficulty makes things a fair bit more gentle, giving you more money for your sales and work and decreasing stamina consumption. If you want a more chill farming experience--and, really, given this genre’s appeal as "unwind and relax"-style games, many people do--you can pick this difficulty with no repercussions. If you’re really invested in the simulation aspect, however, there's a stricter difficulty you can choose that puts more emphasis on the day-to-day micromanagement.

Trio of Towns makes the most of the aging 3DS hardware, giving players nicely rendered environments and an attractive cast of NPCs to engage with. 3D effects are used sparingly for things like the HUD, text boxes, and various graphical flourishes. Sometimes the game will try to do too much, however, causing it to chug a little when there's a big rainstorm or a flurry of flower petals zipping across the screen. It doesn't happen too often, but when it does, it can be somewhat distracting.

One of the biggest changes in Trio of Towns is that, instead of one central hub town to explore, you now have three separate population centers to engage with, each with their own distinct flavor. Westown is a typical Western-inspired city, dotted with mines, train tracks, and cacti, while Lulukoko is a Hawaiian-themed tropical city filled with palm trees, exotic animals, and a beautiful oceanside ripe for fishing. The final area, Tsuyukusa, is a village with a classical Japanese flair, filled with blooming sakura trees, rice paddies, and flowing river water. Each of these villages has a unique culture and vibe to it, slightly changing the way you interact with the people who live there and giving you a variety of new activities and festivals to engage with over the course of the year. They also provide you with opportunities to acquire exotic livestock and crops--it's pretty darn neat to be able to raise banana trees right beside rice and tomatoes, and the variety of stuff you can work with lets you customize and specialize to your heart's content.

Of course, these towns also offer a new layer of simulation micromanagement. You build a personal relationship with each town separately by doing simple part-time jobs for residents (usually quick, somewhat tedious activities like parcel delivery or variations on standard farm chores, though more interesting stuff eventually opens up), participating in local events, and shipping items for sale to specific areas through the use of the farm's shipping bin (which, thankfully, eliminates the need to physically travel to each town simply to sell stuff). Sometimes you'll hit a snag in building your relationships with each area, blocking progress until you fulfill a set of arbitrary requirements to progress further.

Other changes in Trio of Towns are smaller but still help change up the formula enough to keep the game from feeling overly familiar. Foraging for wild plants and materials is more prevalent here, allowing you to sustain yourself on harvesting things growing outside your fields if the going ever starts getting a little rough. Your crops now have individual values for elements like color and juiciness, and later in the game, when you're entering competitions and fulfilling specific requests, growing for specific crop qualities becomes very important.

Building decorations for your farm (called "farm circles") can not only make your fields look incredibly swanky but can also grant you special effects that will aid you in your agricultural endeavors. Tools can be improved and customized to increase effectiveness and efficiency, using less stamina to produce better results. The added complexity and customization these changes offer make for a more varied, interesting farming experience, adding to that sweet, sweet sense of satisfaction you get when that paycheck comes in and you can splurge on the cool farm bits you've always wanted.

But while Trio of Towns does add a few neat new ideas, it falters a bit in streamlining and eliminating some of the tediousness that's been present in this genre for many years. I know--farming is hard, tedious work, so it makes sense that some of that would be present in a farming-themed game, but would improving the user interface a little really affect the feeling of "hard work yields satisfaction" these games deliver? The rucksack is a mess, with similar items taking up separate slots for reasons I can’t understand. You can’t assign specific, commonly used tools to controller buttons to make things easier when doing your morning farming routine. Instead, you have to open up a menu, select a tool, then manually put it away when done.

The same goes with items--it takes a surprising amount of time and button presses to do something as simple as checking your pocket planner to see whose birthday it is. (You can assign specific items to a shortcut menu, but as I found out when attempting to put my planner on this menu, it treats all items assigned this way as something you hold and throw around rather than something you use.) Given the increase in the number of towns, it would also have been nice to have an in-game item that let me keep detailed notes on each of the game’s many characters to help me with boosting my social standing.

Perhaps the biggest issue with Trio of Towns, though, is that its narrative feels a bit weak. The core conceit of "I have to impress my stern father" isn’t terribly compelling as a plot mover, and rarely does the game make a move that makes you genuinely invested in the plight of the people in the titular Trio of Towns. Yes, you do learn a lot about the (sometimes tragic) backstory of your chosen romantic interest over time, but compared to the standards set by Stardew Valley, the story-related elements of Trio of Towns feel a little underwhelming.

But even with some annoying interface issues and a handful of other frustrations (why am I failing delivery quests when I know I put the right items in the shipping bin in time?), Trio of Towns manages to deliver a fun, relaxing experience that's engaging and charming. Story of Seasons: Trio of Towns might not be that revolutionary step forward for this little sub-genre just yet, but it's a pleasant little diversion in its own right that's well worth your time. 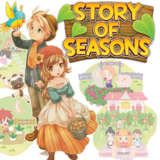 Heidi has enjoyed her fair share of these social-simulation titles over the years. She played through several in-game years of Story of Seasons, finding her ideal husband in Ludus after much agonizing deliberation. 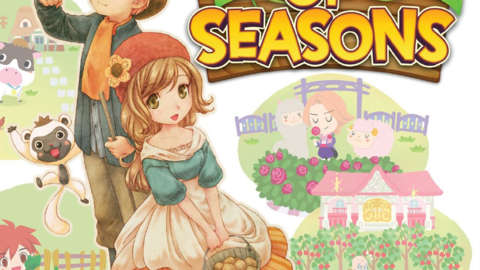 Story of Seasons is the beginning of a new chapter in the ‘Bokujo Monogatari’ series, a long-standing and top-selling farming/life simulation franchise.