Stick It to the Man Review

A pink spaghetti arm can make all the difference.

You can get a lot done with a pink spaghetti-like arm floating outside of your head and an alien buddy named Ted who sometimes lives in your warm, toasty brain. And if that pink spaghetti arm can read the minds of those around you, peel back elements of the world as if they were stickers, help you swing from ledge to ledge and grab objects around you, so much the better.

Stick It to the Man is the story of Ray Doewood, a professional hardhat tester who was clonked on the noggin by a mysterious package dropped from a military airplane during a freak thunderstorm and wakes up to find a pink spaghetti arm emerging from his head. Within hours of this discovery, Ray learns that he's the target of a citywide manhunt. He has been accused of murdering his girlfriend, and the effort to find Ray and the arm has been orchestrated by a shadowy government figure known as The Man. Excellent voice acting brings each over-the-top character to life throughout the game's 10 chapters. This is a world filled with the random thoughts of aliens, insane psychiatrists, presidential brains in jars, and government agents wondering about Descartes. Ray's voice rehashes the works of Woody Allen, especially as he cites his plethora of neuroses.

Stick It to the Man is a puzzle platformer with a dark, twisted 2D art style reminiscent of Double Fine's Psychonauts. The arm proves invaluable and you can readily use its telepathic mode to read the thoughts of the people, animals, and robots around you to learn what they need and what puzzles you should be trying to solve.

The surreal artistic style isn't the only aspect of Stick It to the Man that that's a bit twisted; the sense of logic has just as many oddball wrinkles. In the space of a few minutes, you might peel back the corner of a building to reveal the people inside, use the pink spaghetti arm to read a nearby poodle's thoughts to learn that it wants more-ferocious teeth, use the arm to steal a set of false teeth from a nearby person's mouth, and slap the false teeth into the dog's mouth all to the tune of the game's noire jazz tunes.

The arm emerging from Ray's head is a remarkable and useful appendage. Need to reach a ledge? Just aim the spaghetti arm at a pin above the ledge, and trigger the arm to grab the pin, swinging Ray along in the process. This mechanic feels like a webswinging in a Spider-Man game, and using your worm body as a whip to grab a branch and swing across a gap recalls Earthworm Jim. A responsive, fun control system helps bring it to life here, and it's easy to execute half a dozen swings within a matter of seconds once you get used to it.

Ray is chased by dozens of government agents who'll gladly gladly grab him and tase him to death, though he promptly respawns at a nearby Mr. Copy save point. Instead of dodging or outrunning the agents--which you can do if you want to--you can readily use the arm to gleefully read and mess with the agents' minds to find their weaknesses. If they're thinking about napping or about how to abduct you, for instance, you can grab a sleep icon or an image of your face from their thought bubbles, and then slap those icons onto your pursuers to put them to sleep or force them to chase a decoy of you, respectively. Should you find yourself cornered, it's easy to aim the arm at a nearby pin and quickly swing towards a ledge, traversing walls and surrounding scenery in the process. Even if you think you're trapped, an escape is usually possible, and the pink spaghetti arm makes continuous, nimble evasion both easy and fun.

This is a world filled with the random thoughts of aliens, insane psychiatrists, presidential brains in jars, and government agents wondering about Descartes.

It's easy to learn the Stick it to the Man's movement, environment and puzzle mechanics, which in turn allows you to apply your gray matter to solving the conundrum at hand. When the rhythm of a level clicks into place, there's unfettered joy in exploring the map and literally peeling away layers to discover new areas, reading the minds of the kooky characters around you, and using the nimble arm to solve three or four puzzles at once while swinging across the environment with abandon.

Your enjoyment of Stick It to the Man might be interrupted by occasional audio bugs, such as an issue where a character's screams echo no matter how far from the source you travel within the level. Misleading cues also lead to some frustrating situations. While I was generally able to figure things out, there are times when characters steer you in the wrong direction, especially during an escort session in the asylum level; I had to lead a girl outside of the asylum to a stuffed whale corpse, even though her audio cues indicated she wanted to be led to a dead mouse for her cat.

Purchasing Stick It to the Man from the PlayStation Store functions as a cross-buy and entitles you to both the PlayStation 3 and PlayStation Vita versions. This is a dark, thoroughly ridiculous world you're visiting, but it's an inviting one, and its odd sense of humor, semi-absurd puzzles, and delightful action grab your attention and hold it. 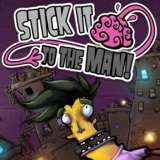 Chris Barylick has never had a pink spaghetti arm floating out of his head, but the day is still young. He grew up loving puzzle games like Maniac Mansion and Day of the Tentacle and spent approximately 12 hours playing Stick It to the Man to completion on a debug PlayStation 3.