Even rabid King fans and completists will be disappointed with F13.

The only thing scary about this paper-thin collection of screen savers, desktop wallpaper, and minigames is the price: $29.95. Even with the Stephen King novella Everything's Eventual packed in, F13 is an overpriced and unimaginative squandering of the King license.

Two out of the three features in F13 that can actually pass for games are whack-a-mole variants. In Bug Splat you squash ascending rounds of cockroaches with a fly swatter, a rolled newspaper, and finally a hammer. Likewise, in Whack-a-Zombie you suppress an uprising of the undead from a screen of gravesites. And that's it - no network play for goofing off at the office, no interesting twists on the formula. No Swimming is a tad more enticing, for about two minutes: It's a fun turn on the old fish-tank screensaver in which you use a decapitated hand to feed a tank of piranha with live rhinos, dogs, cows, and horses. Ignore your adorable pets and they start smashing the screen. The ghoulish premise, detailed graphics, and good animal sounds (rhinos don't like being picked up) make No Swimming the only piece in the package that actually approaches Stephen King's own dark humor.

F13's collection of 20 sound files and ten wallpaper images are both stingy and remarkably bland. A screen of eyeballs, King logos, assorted screams, etc. seem to have strained the limits of the design team's imagination, and few of the images are even remotely clever or creepy. It seems the designers made little attempt to think through how the sounds and wallpaper might actually replace standard desktop effects. Background images of roaches and a hearse as well as noises such as screams and axe chops are nice enough, but how much creative energy does it really take to assemble witty, horrific effects that beg to be used for the most common computer operation? Moreover, why not take some of these creepy themes and convert them into standard desktop fare, like a calculator that screams or a daybook with eerie alarms?

F13's seven screen savers are more like mini-movies, all of which have good graphic design but underwhelming premises. In Murder and Mayhem, we see the silhouettes of a killer and his unsuspecting female victim through different windows in an old house. In It's Just Lightning, we see a demonic clown illuminated by lightning flashes creeping up on a homeowner as he tries to replace a fuse. While the screen savers are fairly clever, you need to sit through the five-minute cycle of each to get all the sight gags, which obviously begs for some sort of startling denouement. To be fair, just about all desktop gadgets, wallpapers, and screen savers grow stale quickly. But more considerate designers make up for this by providing a wide variety of add-ons and variations that users can swap in and out frequently. Not so with F13, which can't even muster up more than a dozen wallpapers.

The King story, Everything's Eventual, is pretty standard fare that's reminiscent of The X-Files. A dullard of a young man signs up with a secret corporation, Trans, to wreak a kind of cosmic justice on the world's bad guys. The novella is presented in an onscreen book. It's entertaining to read, but just as underpowered as everything else in F13, thanks to its sparse sound accompaniment and uninteresting illustrations. You can't print the story out, and the multimedia add-ons are so weak that you'll wonder why.

Even rabid King fans and completists will be disappointed with F13. It's unclear whether the designers even read much of the author's work, as so little of it informs these gadgets aside from a trivia screen saver. Given King's library of familiar plots and icons like Salem's Lot, Carrie, Cujo, and Christine, it's surprising that Presto Studios missed the opportunity. Just imagine the ways in which a vindictive Carrie, rabid Cujo, or pissed off Firestarter could have torn apart your screen. How about blood-filled vampire meters for indicating system resources or battery life? In fact, every gadget in F13 will probably only leave you thinking about all the ways it could have been done better. The only one who might be frightened by F13 is Stephen King himself, who risks tainting a fine pop entertainment legacy by attaching his name to this sort of thing. 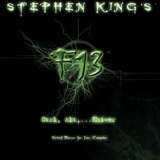