Floating adrift in the middle of the Pacific would rival the entertainment value of this strategyless strategy game.

Earlier this year, Konami released Steel Horizon for the Nintendo DS. Billed as a naval "strategy" game, Steel Horizon offered a not-yet-played-out take on World War II combat, but it dealt in extremely shallow gameplay. That game has now reemerged on the PlayStation Portable. While Konami has certainly put the intermittent three months to use, the fruit of the team's efforts remains much the same. Other than a surprisingly enjoyable storyline, fans of turn-based strategy games will find little to like, and much to loathe, about Steel Horizon.

This may or may not come as a surprise to you, but Hitler was kind of insane. This and other history lessons are dished up in Steel Horizon, which presents a fairly entertaining narrative on the occult aspects of WWII that's comparable to anything you might find in an Indiana Jones movie or Hellboy comic. The story is noteworthy, even commendable, in that it doesn't devolve into the typical American military brouhaha, as both German and Japanese soldiers are portrayed in an honorable light altogether separate from the megalomaniacal urges displayed by higher-ups on all sides of the conflict. It's a story worth telling, which is why it's a crying shame that few will be able to withstand the gameplay long enough to see its end.

Steel Horizon's greatest flaw is that for a strategy game, it comes up woefully short on the strategy. Aside from your one flagship that you begin the game with, you aren't able to upgrade individual ships in your fleet, so you'll deploy mostly the same boats throughout the game. Resources, which are used to purchase ships, accrue by controlling shipyards scattered about the map, but these are never particularly scarce, and you'll only come up wanting for funds in the very beginning of each stage. Ships come in 14 different flavors, but you'll pragmatically settle on three or four types to flesh out your fleet. This is, of course, unless you become saddled with ships you don't want, which frequently occurs. Most missions will start you off with an entire host, including many ships you'd never intentionally commission. Since you can't scuttle or dock the ones you don't want, your only recourse is to either send them to the wolves, which is as much a hassle as it is a time sink, or ignore them completely. However, this can cause problems, because you're allowed only eight groups total, and a single useless ship off by its lonesome counts as a full group.

This isn't to say you'll need all eight of those groups, though, as missions won't tax your frontal lobe in the least. A balanced flotilla will sink anything you run up against, and though the enemy artificial intelligence is slightly improved in the PSP version, it still isn't that good, so you'll typically always have the upper hand. There's also not much variety to liven up the experience. By the fifth mission of going up against the same enemies with the same outfit under the same terms for victory, you may get a bit antsy. By the 10th, you'll wonder if the story's conclusion is really worth the tedium. By the 15th, your eyes will take on a zealous glint as you stubbornly and wantonly fling yourself into the next scenario. And by the 20th hour-long mission, you'll be bobbing your head, agreeing with the robed men that humanity must die.

Perhaps to differentiate itself from the crowd, Konami thought it might be a good idea to incorporate some button-mashing elements into the game's battle sequences. Instead of just quickly simming each encounter, as those who play these types of turn-based strategy games are used to, you'll instead have to endure a 60-second battle that essentially involves you cycling through your ships and hitting the X button when prompted to fire your guns. In this regard, the PSP version at least lets you know when each ship's special attack is available, whereas in the DS version you simply had to guess. You're technically also able to reposition your ship, but it's difficult to judge where you're going on the map, and the encounter area is too small and the battles are too short for it to matter much anyway.

Steel Horizon will occupy a significant amount of your time if you let it. Each of the 20 missions averages between 45 minutes to an hour, with the vast majority of that time being spent traversing the open seas, sailing a few uneventful squares at a time. It just takes too long to do anything. This is mainly because there's some kind of lag or processing delay on all of your actions, which becomes excessively irritating extremely fast. It also doesn't help that you'll be digging through a good deal of menus, as everything from moving to attacking to altering the orientation of your ship is buried somewhere. Further, instead of letting you choose the exact route you want to take with your ships, you must cycle through every feasible route on the grid to find the one you want. And even then, you can't always box around minefields without traveling a shorter distance than what you'd otherwise be capable of.

But wait, there's more. If you wanted to see what the game would be like without its one redeeming quality, you can subject yourself to 21 skirmish missions that are by and large exactly like the missions in the story mode, sans the story. If you and a like-minded individual are so inclined, ad hoc multiplayer is also an option. However, with the way turns play out, it would have been functionally the same to just pass the PSP back and forth. And be sure to have a charger handy, because as long and drawn out as the single-player missions are, multiplayer takes that much longer. With both of these modes, it would have been nice to at least be able to use the flagship you improved over the course of the single-player campaign. As it is, you just start out with generic ships.

Aside from a few nice-looking cinematics, Steel Horizon doesn't have a particularly remarkable look. The overhead grid is pretty much what you'd expect from a strategy game. Though you'll play in both the Pacific and Atlantic, environments in the battle sequences all look the same--which is to say, there's a lot of ocean and nothing else. There are a fair number of explosions during these sequences, and the PSP version has the added effect of a bit more animation when you fire off your ships' special weapons. Ships now reflect their current state of damage in this version, as well. The presentation really takes a hit with the game's interface, which is sorely lacking. There are no onscreen indicators of your ships' health other than ambiguous colors, and the slight delay discussed above makes it a real bear to dig through menus. Likewise, the game's soundtrack is ridiculously monotonous. A single maritime march loops for the vast majority of the game, and combat noises have never sounded so passive.

To be sure, the PSP version of Steel Horizon is a superior, more complete game than the DS version. However, the real meat of the experience--the core, underlying mechanics--remains by and large unaltered. The strategy is still mindless, the interface is still cumbersome, and the fun factor is still absent. The story notwithstanding, there's not much worth justifying the price of admission on this one. 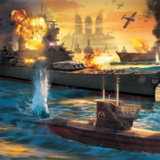 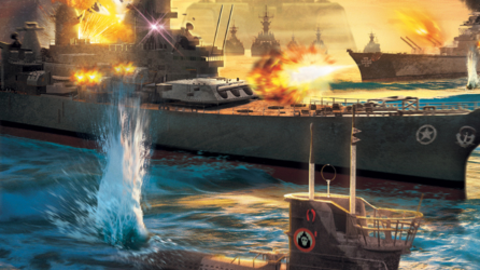 Steel Horizon is a turn-based and real-time strategy game offering control of a naval armada outfitted with battleships, submarines, fighter planes and artillery.