An Orchard of Graves

Steel Division: Normandy '44 is a very peculiar sort of real-time strategy game. Instead of trying to encapsulate hundreds of years of history or even the entirety of a single war, Steel Division is all about the specifics. Your pool of units is limited to a few key types. The rest is emergent--these soldiers and their gear were designed to work in tandem, so you'll need to as well. But that leads to beautiful match pacing and aggressive fights that hinge on your intelligence and your mastery of the battlefield.

As you might have guessed, given the name, Steel Division centers on the lead-up to (and resolution of) the 1944 Normandy beach invasion in World War II--better known as "D-Day." What's a bit more surprising, though, is the game's exhaustive approach to detail. The whole of the French countryside has been accurately reproduced here with the help of Royal Air Force reconnaissance photos of the time. For the purposes of play, that means real-world schemes work just as well here.

That, plus the fact that Steel Division comes from hardcore strategy publisher Paradox Interactive, might lead you to think the game isn't inviting to new players. Thankfully, however, that's not the case. Steel Division may layer on meta-strategy later on, but the basics are rather simple. You'll be working with the standard array of tanks, vehicles, infantry, and artillery. The game includes dozens of variants of each, based on different historical divisions and nations, but as far as the single-player mode goes, that's all you need to know.

Matches focus entirely on how well you leverage each of these units' strengths and use them as an interdependent network. There's no base-building or resource management to pad this out. You aren't getting big unit upgrades or fiddling with new supply lines. You have one "resource" that builds up over time, and you spend it to deploy new units. You order up troops, you pick where you want them, and that's it. It's fortunate, then, that this foundation is more than strong enough to carry the experience.

Steel Division gets a lot of mileage out of some very simple concepts. On any given map, you're only managing about 10 different unit types. With those, you'll be either holding an area or heading off to kill some guys--defense or offense. Units counter one another in a simple, self-explanatory order. Anti-tank infantry is for taking out tanks, of course--put them where you don't want tanks rolling. That may sound flippant, but it's not. Each of these units aligns their real-world equivalent so well that your task might be simple, but the outcome won't be. While you’re setting up your heavy infantry, your foe is no doubt preparing their artillery to pin down your anti-tank rifles.

This works because the game limits ammunition, forcing you to resupply every so often, and those units are, as you might suspect, squishy. This forces you to divert resources to supply critical positions you hold and means that you’re always a little bit vulnerable. It’s impossible to perfectly secure your trucks, but foes won’t always know where you'll come from. There’s a psychological element here that elevates the stakes and complexity of play. The sum of those elements working in tandem is some ferocious blood sport.

The adrenaline of pulling together a coordinated attack is priceless, and Steel Division is all about chaining these moments together, directed as they are by an aggressive tie to historical realism.

You'll have to constantly scan the field, checking up on unit progress and making sure they have enough munitions. It's a lot of micromanagement, but there's enough tactical diversity that it works. Most matches will have you rapidly switching between softening up sturdy targets so that you can secure a new location and running door-to-door to clear out homes with your infantry. Success takes constant vigilance over the field.

For the most part, that's not too hard to manage. The campaign, which is broken up into three sections with four missions in each, doesn't tax the mind too hard too fast. Instead, you'll get a steady introduction to more advanced concepts--like the ludicrously detailed sightlines and how you can and need to use each unit's sphere of awareness to your advantage. You'll play with their use and application a bit before moving onto a new lesson. It teaches you well enough, but it really just serves as a lead into the multiplayer and that mode is raucous fun.

Steel Division lets you group up into teams of up to nine human players, and that dramatically increases the complexity of your tactics. You can apply pressure to enemies by leading them through elaborate ambushes or pulling together an aggressive pincer flank. You'll notice, however, that there's not a lot to be done with defense--that due to the fact that, without bases as a center of power, there's nothing that really needs defending directly. Your necessities are ad hoc: Secure this point so that you can field an assault from that one, for example. This reflects the mobility of the Normandy assault and that neither side was keen on settling in for a drawn-out, bloody fight.

You may scoff at that, though, after your first few multiplayer games. Games with other humans (or even AI) can run on any of several maps that can scale up to positively ridiculous sizes. They exist to encourage dynamic, emergent stories. A hamlet locked down by machine guns and flamethrowers could be a ploy to lure an armored assault, letting you counter with a barrage of heavy artillery. Being at once divorced from the realism of the Second World War and intimately tied to its combatants, location, and gear means that you can arrange high-stakes scenarios that no commander would orchestrate. That leads to some incredible moments when the ploys do actually work out. If they don't, your front may collapse, but a steady stream of resources means you'll probably be able to mount some type of defense in short order.

That synergy leads to its own sort of intra-game pacing. At first, players will all be jockeying for position, but as they settle in, attacks become directed and concentrated--especially with teammates. Then the match shifts to center on how you can best capitalize on openings you've created without overreacting. Overcommitting soldiers can strain your ability to supply them with ammunition--meaning you may earn a temporary foothold in a new spot, but you'll have to be active to make it last. Similarly, swinging too hard against an enemy will turn you into easy pickings. While most strategy games lean on rock-paper-scissors combat pretty heavily, rarely is the difference in effectiveness so pronounced. Artillery shreds vehicles so fast, you'd think the targets might as well have been tissue paper. There’s a solid counter to everything, and the challenge becomes finding that solution and deploying it well in countless different micro-scenarios.

Pinning down enemies with suppressing fire is a blast. So, too, is a well-executed offensive that cracks and divides enemy front lines. The adrenaline of pulling together a coordinated attack is priceless, and Steel Division is all about chaining these moments together, directed as they are by an aggressive tie to historical realism. If there's one failing here, it's that the game doesn't offer many chances to explore that rich field on your own before jumping into multiplayer matches. But when it all comes together in the perfect match, Steel Division's magic is undeniable. 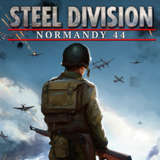 Dan Starkey is a strategy-game obsessive. He’s also just about tapped out on World War II–focused games, Steel Division: Normandy '44 proves him wrong. He received an early copy, and a final review copy for the purposes of this review.