In the battle against the fickle controls, the obtuse mission design, and the squandered potential of Steel Battalion, everyone loses.

Steel Battalion: Heavy Armor is an exercise in trial, error, and exasperation. Unruly controls and vexing missions conspire to make this one of the most aggravating games in recent memory. Intrepid, foolhardy, and otherwise determined players will find some glittering beacons of hope here, the intriguing by-products of ambition gone astray. But alas, discovering these gems is but a fleeting delight, because Steel Battalion is always ready to topple you with another wave of frustration.

The first such wave crashes hard over your head during the very first mission. Fresh out of the tutorial, you storm a beach in your two-legged vertical tank and meet with a vicious barrage of enemy fire. You've just learned the basics of how to operate your VT in a controlled environment, and now you are called upon to pull all your knowledge together on the crucible of combat. Shells crash into you from all directions while radio chatter crackles with unclear orders. It's a brutal beginning, and one that is totally out of step with the missions to come. Many later levels offer shorter, simpler, and more accessible objectives, leaving you to wonder why Steel Battalion is so eager to separate the masochistic wheat from the impatient chaff.

Yours not to reason why, however; yours but to do and die. With the exception of movement (analog sticks) and firing (triggers), all of your actions are performed with hand motions, usually from a seated position. Steel Battalion and the Kinect want you to feel like you're in the cockpit of your VT, so you reach up to pull down the periscope, stretch your arm forward to press dashboard buttons, extend out to the side to pull out the map, and so on. This is a cool concept, and the moments when you feel a strong connection to your cockpit are rewarding. More often, however, the link between you and the action is tenuous at best.

A one-armed reach registers as a two-armed push. Grasping the top right quadrant registers as swiping to the right, and now you're watching your crew member choke instead of purging the smoke from the cabin. You lunge to close your shutter against enemy fire, only to watch your virtual arm hover indecisively. The imprecision is maddening, and it has deadly consequences in combat. Checkpoints are infrequent, so death can mean replaying lengthy stretches of the mission.

As you become more accustomed to your fickle machines (both the Kinect and the VT), you can mitigate the control flaws. Elements are highlighted when you reach for them (unless you've opted to remove such indicators), and as you play more, you get a better sense of the virtual space in front of you. But even with precision and practice, you can never avoid every problem. Even if you've successfully performed an action dozens of times, it might not work the next time. It's like you're an ornery mechanic who has somehow kept an old junker running for years after it should have been scrapped, only instead of cathartically bashing things with your fist when they don't work right, all you can do is flail impotently.

Fortunately, your VT is powerful, and the temperamental controls won't prevent you from blowing up a lot of enemies. Infantry, tanks, and enemy VTs are your main opposition, and all can pose a threat. Every VT has weak spots, so you can never be sure how much damage you or your enemies are able to sustain. A well-placed blast can send an enemy VT to the ground in a satisfying crumple, but you can also be on the receiving end of such lucky shots. A deadly hit may come from a VT or from a tiny enemy soldier with an RPG launcher, one of which is clearly more disheartening than the other.

A perilous battlefield is one thing; an inconsistent enemy is another. Sometimes enemies press the attack relentlessly, and other times they putter around, unsure what to do. You may withstand an accurate barrage from distant VTs, and then be casually ignored by an enemy in close range as you scramble to vent the cockpit. The irregularity of your enemies, the fragility of your VT, and the uncertainty of the controls combine to create an environment in which any combat scenario can end abruptly in death. You may know where it came from or you may not, but no measure of skill or caution can prevent it.

Trial and error is expected in Steel Battalion, though certain missions require more error than others. Some outings are almost astonishingly easy, while others are nigh impossible to pass without numerous deaths and thorough scouting. Objectives are often unclear or inaccurate; while this may channel a kind of realistic battlefield uncertainty, it makes for frustrating forays. Your map offers only the most rudimentary overview, sometimes even failing to show your position, and the fuzzy camera feeds are even less helpful. Furthermore, only some of the radio chatter you hear is strategically relevant, and a mere fraction of it is specific enough to act on. In one level, you hear the agonized screams of infantry under fire and a cacophony of voices telling you to go help them, but no one thinks to tell you where they are.

In the midst of all this uncertainty, the three crew members in your VT are a welcome presence. The number of characters you meet varies depending on how many of them die during your exploits, but they all have distinctive personalities. You have some neat opportunities to interact with them by sharing food or shaking hands, or maybe just patting their heads until they yell at you to stop. There are dramatic moments as well: you can grab a soldier who is trying to flee and drag him back into the cabin, or pull a wicked piece of shrapnel from your loader's torso. Some of these opportunities can pass you by if you don't look for them, and there's something appealing about being able to discover gameplay moments by paying attention, rather than being automatically guided into them.

And there are other moments like this. Moments when, despite the array of aggravations aligned against you, you see what Steel Battalion was trying to be. These include a tense desert trek dripping with heat and danger, an enemy VT staggering from the impact of your well-aimed shell, and the fact that you can actually clear and load the guns yourself, even though you're totally screwed if it ever comes to that.

These moments give you a glimpse outside to the game that could have been, but you are invariably dragged back inside the suffocating box of the game that is. Steel Battalion is riddled with erratic flaws of the most insidious kind, the kind that make you think you have a chance to master them. You don't. You can only endure them, and on a handful of levels, endure them with some friends in limp online co-op. But Steel Battalion is still miserable, even with company, so unless you're a glutton for punishment, it just isn't worth it.

View Comments (0)
Back To Top
3.5
Bad
About GameSpot Reviews 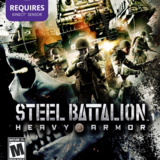