It's easy to be immediately charmed by SteamWorld Quest's colorful fantasy world and the band of merry heroes you'll journey across it with. Their plight is simple and straightforward, making its adventure of confronting evil and its tightening grip on the kingdom around you palatable without feeling overbearing. Underneath this whimsical veneer, however, is a daunting strategy game, one which uses its clever take on turn-based card combat to create a wickedly complex system of decision-making opportunities. But it's also one that is designed intelligently enough to make each part easy to learn and engage with.

With regard to gameplay, SteamWorld Quest bears no resemblance to the rest of the games in the series. This is first and foremost a turn-based strategy game, with a light sprinkling of role-playing thrown into the mix in the form of character classes to differentiate each of your five potential party members. Each character features a variety of moves that deal different types of damage and inflict status effects on foes. Fire attacks will deal additional damage to enemies that deal frost, electrical attacks will have the chance to stun enemies for several turns, and poison will inflict recurring damage over time. It's easy to pick up and play, which helps SteamWorld Quest get you right into its combat without strenuous onboarding.

The act of deciding what moves to enact in combat is a bit more complex, though. It's governed by a deck of 24 cards, made up by your party of three who can bring eight cards each. In battle, new cards are drawn with each turn, while your deck resets automatically once depleted. Cards that represent the most basic moves in your repertoire cost nothing to play and in turn reward you with cogs once placed on the field. These cogs act as a currency that you spend to play more powerful cards--ones that inflict greater damage, target multiple enemies, or buff your party with helpful attributes--making you consider when to hold back and when to go all in.

The process of constructing a deck that works cohesively is as engaging as combat itself. You can combine multiple character-specific cards in powerful ways; for example, simply playing all three of one character's cards in a turn will play a bonus fourth move automatically, which itself is governed by the weapon you choose to equip on the character in question. Some cards will perform better when used as a follow-up to a specific character's card, boosting damage or adding a bonus effect. Your effectiveness in combat then is not just about the decks you construct, but all the ways in which you use the hands dealt to you efficiently. All these options can initially feel overwhelming, but the restriction to just eight cards per character condenses your options down to a level that balances its complexity without sacrificing its potential depth.

Combat is accentuated by delicately detailed character models that do a great job of retaining the signature SteamWorld look while also slickly adapting to the new high-fantasy setting. The vibrant coloring on each main character is also aptly used to inform you of what type of abilities they bring to the table. The red-hot knight's armor of Armilly alludes to her ferocious fire-based attacks, while the yellow and rose-petal adorned gown of a mysterious samurai flows with each of his fast-striking electrical attacks. Being able to tell this information at a glance is helpful, and on top of that, each design looks great.

Stylistic and impressively detailed effects also help each combat encounter feel intense, despite having a turn-based rhythm. Blistering fireballs explode in a blaze of red and orange glory on impact, and electrifying lightning attacks bounce furiously between foes while engulfing them in static. Some moves have repeated effects, layering damage numbers and sprites atop one another furiously until the attack has ended. These often resulted in the frame rate dropping to a complete crawl at times, however, and it was most prominent when the Switch was running in docked mode. It's infrequent enough to not hinder gameplay, but it is an eyesore when it does crop up.

That's a shame, because SteamWorld Quest looks delightful both inside and outside of combat, sucking you into its steampunk-inspired medieval world. The bold outline that each character bears helps them stick out from the hand-drawn backdrops you explore, but none of those backdrops go unnoticed, either. Gorgeous and brightly coloured forests contrast dark and gloomy castles whose hallways are sparsely lit with auburn lanterns. Your adventure also moves you along from one intriguing setting to the next, letting you take in the sights of an abandoned sorcery school before whisking you away to snow-capped mountains with billowing winds. Each chapter of SteamWorld Quest gives you something new to look at, and it's always a rewarding transition.

With so many combat options to play around with and captivating backdrops to accompany them, it's disappointing that SteamWorld Quest struggles to find a balance in its difficulty. Each chapter--broken up into small areas filled with either small treasure to collect or groups of enemies to fight--features increasingly varied foes to test your decks against. Despite their changing movesets and elemental defences, most regular enouncters feel too easy, rarely forcing you to consider strategic changes to your constructed decks or active party members. At a point I was simply making changes for the sake of curiosity and not necessity. This can trick you into a false sense of security, encouraging you to focus on only a subset of cards available to each character. This becomes problematic when SteamWorld Quest suddenly introduces daunting and demanding combat scenarios, while giving you few avenues to rectify poor past choices.

These encounters are predominantly made up of SteamWorld Quest's nightmarish boss battles. They are far more challenging than the foes that litter the areas around them, acting as unfair skill checks that ask you to understand your abilities in ways you're not required to elsewhere. Since you can only store a single saved game at a time, it's impossible to go back a handful of hours and better prepare your party, either, locking you into the decisions you've made and forcing you to rapidly rotate though your available options until a combination (hopefully) works. It's frustrating, too, because most of these bosses can feel like they break the rules of combat that all other enemies conform to. They can consistently pull off powerful moves one after the other without the same strict resource requirements you're confined to, bombarding you with damage you can't wrestle with effectively. Given that most of these encounters can be prolonged bouts, it's hard to work up the motivation to try again after a loss.

The process of constructing a deck that works cohesively is as engaging as combat itself.

Outside of its frequent and occasionally rigorous combat encounters, SteamWorld Quest plays it safe. Its narrative is framed as a story being told to characters you might be familiar with from other SteamWorld games, giving it a subtle attachment to the rest of the series. It is a simple, sometimes juvenile tale of a band of misfits coming together and vanquishing an uncomplex force of evil. It retains the same tongue-in-cheek wit of past SteamWorld games, with chuckle-worthy one-liners thrown in throughout. It keeps the narrative light and humorous, even as it eventually explores the purpose of heroes in an age where no one seems to care about society one way or the other. Although SteamWorld Quest falls short of ever saying something meaningful, it does leave the door open for even more tales in the future.

It's difficult to ignore Steamworld Quest's missteps, especially when it transforms itself from a delightful romp through a light-hearted medieval kingdom into a grueling test against unfair enemies. Despite most encounters not pushing you to play with new party configurations, building a powerful deck of moves is still rewarding when you see your clever experiments play out. Quest gives you a lot of complex combinations to play around with while also keeping things approachable enough to not feel daunting. Its uneven difficulty saps some enjoyment out of the otherwise whimsical journey through this new and gorgeous kingdom, but it's still one that is admirably accessible while deep enough to be engaging throughout its 20-hour adventure. 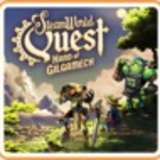 Alessandro was engrossed by SteamWorld Quest's card-based combat, completing the main story in just over 20 hours and spending another five in the intense arena combat challenges. He still wishes he could turn that one corrupted tree into firewood for all the hours wasted trying to beat it. Review code was provided by the publisher. 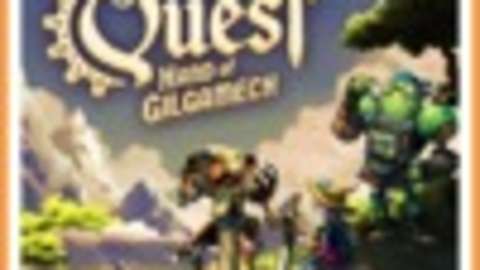 7.4
Sign In to rate SteamWorld Quest: Hand of Gilgamech