SteamWorld Dig is a charming, atmospheric exploration adventure, but it grinds to a halt just when it starts going full steam.

Great game ideas are no longer as rare as diamonds; where major publishers are content to rely on established franchises, independent developers are eager to break new ground. Swedish developer Image and Form has stepped up with SteamWorld Dig, a Western-inspired platforming adventure in a world populated by steam-powered robots. It's not a typical platformer, however, combining Metroid-style exploration and upgrade-gathering with randomly generated environments to chop through in search of secrets. Too bad the mining comes to an abrupt halt, because SteamWorld Dig's setting hints at even more riches begging to be unearthed.

SteamWorld Dig follows Rusty, a steam-powered mining robot. He has come to the tiny desert town of Tumbleton to explore a mine left to him by his Uncle Joe. The others in the village don't know what became of Joe, but they assume that something interesting lies deep within the mine. It's up to you to dig into the depths and discover the secrets held far below. Will you find untold secrets and riches, or will you stumble into treacherous traps and wake fierce foes instead?

Rusty starts with very few abilities at first: he can jump, wall-jump, and attack enemies and walls with his trusty pickaxe. A lantern he carries illuminates the area surrounding him, but as the light runs low on fuel, his ability to see his immediate surroundings deteriorates. Smashing through the dirt can reveal passageways, enemies, and precious ores that can be taken back to town in exchange for cash to buy tools and equipment upgrades. Tools include ladders, stationary lights, and, later on, instant teleporters and highly destructive dynamite. Equipment upgrades enhance the weapons and mining implements you find, as well as allow for increased health, lighter fuel, and water.

Water becomes very important as the game progresses. Since Rusty is a steam-powered robot, many of the special skills he learns require fluid, like the steam-enhanced high jump and the drill needed to tear through tough rocks. Unfortunately, resources like water pools tend to be fairly scarce underground, so the best way to recover health, lighter fuel, and water is by defeating enemies and taking their leftover power-ups.

The game becomes a challenge in managing your various resources: Should you try to search for a water pool, possibly stumbling into traps, or instead attempt to kill challenging foes with your measly pickaxe and hope they drop fluid? Do you tough it out and try to dig as deep as possible with low light to get as much loot as possible, or just set an expensive teleporter to return to town and cash out what you have? While losing all of your health in the mines doesn't reset your digging progress, it does cause you to lose half your money, get sent back to town, and drop the ore you're carrying, giving a fair sense of risk versus reward.

Of course, you wouldn't even want to take such risks if the rewards weren't worthwhile. The mines in SteamWorld Dig are laden with secrets, ranging from rarer-than-usual ores and precious upgrade orbs to side caves filled with puzzles, traps, and hidden passages. Said caves typically boast new weapons and mobility enhancements, but require solving a challenging platforming puzzle and mastering the game mechanics you've learned thus far. (Thankfully, perishing in these caves lets you retry rather than incur the typical death penalty.)

There's a sense of progress as you dig deeper and deeper into the mines, uncovering rarer ores and augmenting your abilities. The moody, lonely atmosphere of the dark mines builds gradually, and the way the backgrounds and enemies change--as well as the talk in Tumbleton about the Old World lying deep beneath the earth--hints at some tantalizing mysteries about the game's setting. Frustratingly, these mysteries are barely explored, leaving a lot of curiosity about the world of these steambots that is never satiated.

This is a common problem throughout SteamWorld Dig: it feels like the game has just gotten started exploring one element or another, only to leave you with a sense that it never reaches its potential payoff. Getting new abilities is great for exploring, but there's very little combat in which extended mobility and weaponry are fully utilized. Without some big enemy fights to break things up, the thrill of digging starts to wear thin. Additionally, in many games of this type, getting a new ability inspires you to return to previous areas and explore them in hopes of uncovering new, previously inaccessible secrets. Only a few areas in this game yield rewards when revisited in this way, making the effort needed to revisit and explore them feel wasted. And just as Rusty's mobility is approaching that of a typical platforming hero, the game comes to an abrupt end, with a single boss encounter--the only one in the game--capping off the experience.

Perhaps the game's brief length and unfulfilling conclusion wouldn't be issues if everything else about SteamWorld Dig weren't so good. Exploration and augmentation are a lot of fun, the setting is interesting, and the resource management adds some challenge and tension. Yet the game seems to be leading to more and more awesome things, only to have these elements--the setting, the combat, the skill upgrades--end just as it they get interesting. Nevertheless, SteamWorld Dig is an entertaining underground adventure worth digging into. 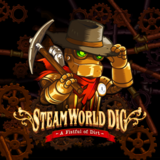