The first SteamWorld Dig was most notable for its unique blend of mining mechanics and Metroid-style exploration, but it ended right as it began to come into its own. Its sequel is twice as long and puts that added runtime to good use, as both the story and mechanics are given room to flourish. The result is a brilliant and varied evolution of the first game that not only expands upon its hybrid formula, but presents it in its best light.

SteamWorld Dig 2 takes place in a post-apocalyptic steampunk world where Earth has become a desert wasteland; its remaining inhabitants are small populations of steam-driven robots and irradiated humans. You control a steambot named Dorothy searching for her missing friend, Rusty--the protagonist of the first game. When Dorothy hears that he has been sighted entering the mines of an old trading town, El Machino, she embarks on a journey to find him.

The story is more focused than its predecessor. Events unfold at a brisk pace, occasionally hitting you with unexpected twists and tonal shifts that keep the adventure compelling throughout. Also impactful is the way the story contributes to the overarching SteamWorld universe as a whole (it serves as a bridge between Dig 1 and SteamWorld Heist). By its conclusion, past narrative threads that were once disparate and unclear are finally expounded upon, elevating your attachment to the characters and the world.

Even if you aren't invested in the series' lore, Dig 2 gives you more than enough to latch onto with its eclectic cast. Dorothy makes for a likable lead and the characters who surround her are humorous and well-written. In particular, Dorothy's Navi-like sidekick, FEN, is one of the game's standout personalities. His sassy, oftentimes snarky, remarks are amusing, but as you progress, he grows into a far more sincere and endearing ally whose presence is irreplaceable.

Also worth noting is the presentation; both visuals and music are charming and stylish. From the moodily lit underground caverns you explore to the airy and upbeat hip-hop inspired tracks that permeate the various locales, there's an endearing atmosphere that constantly pulls you in.

Like the first game, you spend time exploring various underground mines. With your trusty pickaxe, you smash through blocks of dirt to reveal passageways, while along the way acquiring precious gems and minerals. You also obtain tools and power-ups that help you burrow even deeper. Once your pockets are filled with treasure, you return to town to sell your materials and upgrade your tools, and then you return to the mine anew.

While the digging process seems repetitive in nature, it never becomes tedious. Exploration feels like longform puzzle solving. You're always strategizing how to take advantage of a mine's terrain and the enemies within to clear tunnels and acquire more treasure. And with the more varied tools you have access to this time around, the methods you employ grow increasingly complex.

One moment you're using your pressure bomb launcher to create a pathway that you can't reach with your pickaxe, the next you're using your grappling hook to strategically detonate a TNT barrel to kill a group of enemies. These instances are when the game is at its most fulfilling, as you have a great deal of flexibility in choosing how to approach a given area. Dig 2 encourages you to be methodical, but unlike the original, it gives you more time to be creative, and rewards your cravings to diligently explore and discover new secrets.

New to Dig 2 is the addition of collectables called Cogs, which you can use to enhance your tools with mods. These upgrades are varied and unique, each improving your abilities in different ways. For instance, you can equip a mod that increases your chances of getting two precious materials from one resource block, or you might equip one that occasionally prevents instant death from falling rocks. As you obtain more Cogs, your ability to tailor mods to better suit your playstyle grows, which becomes invaluable when facing difficult obstacles in later areas. And with the varied terrain and hazards you encounter, you always feel an initiative to experiment to better your mining efficiency and chances of survival.

When you're not spending time digging, you're exploring caves, which are special rooms scattered across the map containing either platforming challenges or puzzles to solve. These brief, well-crafted trials test your mastery of the game's base mechanics: a spike-covered room demands quick execution of your mobility options; a block-stacking puzzle challenges your knowledge of the pressure launcher's limitations; and a room with collapsing boulders has you timing your sprints in different spurts to avoid being crushed. On top of rewarding you with much-needed Cogs, caves provide satisfying opportunities to exercise your reflexes and intellect. You often look forward to discovering them, as their distinct challenges are also entertaining proving grounds to test your upgrades.

Alongside the mechanical improvements, it helps that there's a greater variety in level and objective design. From an ancient temple surrounded by lava to an ethereal jungle, each location you explore goes beyond the standard underground mine you might expect. Not only are levels thematically different, they're also structured in distinct ways from each other. At one point, you're tasked to dig horizontally instead of vertically, only to be led to an area that has you completing a gauntlet of caves in order to open a gate with multiple locks. These changes in design frame the mechanics in captivating ways, challenging you to do more than just strategically carve out tunnels. Dig 2 meticulously uses its assets to great effect, continually changing up the pace from beginning to end.

Every advancement Dig 2 makes to its story and mechanics strengthens your initiative to progress. There's an overwhelming sense of momentum that runs through the adventure; as if developer Image & Form sifted the original in a pan, removing its redundancies while expanding upon what made it so fun to persistently play. In your quest to acquire every upgrade and explore every nook and cranny, there's no shortage of hidden collectables to discover. And with post-game content that unlocks after you unearth every secret, the desire to keep digging intensifies. Dig 2 manages to not only be an exceptional successor, but a great adventure in its own right. Where the first game was a diamond in the rough, Dig 2 is a polished jewel.

View Comments (54)
Back To Top
9
Superb
About GameSpot Reviews 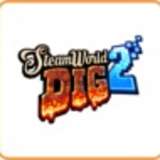 Matt spent about 10 hours playing SteamWorld Dig 2. He was a light fan of the previous SteamWorld games and found this latest entry to be a pleasant surprise. He hopes to keep playing to unearth all the secrets the game has to offer, while making a multitude of digging puns about his exploits to his friends along the way. GameSpot was provided with a complimentary copy for the purposes of this review.