What Starsky & Hutch does best is pay homage to the wonderful clichés of 1970s cop shows.

With television in the 1970s rife with cop shows of varying quality, you needed some sort of hook in order to stand out. Starsky & Hutch had one of the best--a 1974 Ford Gran Torino with a memorable red and white paint job. Though the show didn't rely as heavily on its trademark car as, say, The Dukes of Hazzard, it was still a fundamental part of the show. Now Gotham Games has released a driving-and-shooting game that evokes the general style of the show. The gameplay isn't terribly deep, and the story mode isn't very long, but the game is still mildly enjoyable. What Starsky & Hutch does best is pay homage to the wonderful clichés of 1970s cop shows.

Starsky & Hutch plays like a long-form version of the many chase scenes that populated the TV show. You tear around Bay City, chasing down bad guys and occasionally escorting witnesses, usually while driving Starsky's signature 1974 Ford Gran Torino, the "Striped Tomato." The fundamental mechanics here are driving and shooting. As you give chase, a reticle automatically locks on to the closest targetable object within your line of sight, allowing you to focus most of your attention on the driving. The auto-targeting is pretty intuitive and dynamic. There are times--specifically during defensive missions where you're severely punished for shooting up the car you're supposed to be defending--that the automation can prove frustrating. The driving mechanics are pretty forgiving, and the car has the kind of weight you'd expect from a mid-'70s muscle car. It's generally pretty fun to drive too. There are some weird physics issues that pop up from time to time, though. Sometimes you can catch an edge that changes your direction dramatically, or you're just brought to a complete stop. Occasionally, destructible objects don't give way right when they should. The real problem with the core gameplay mechanics is that there's not enough variety. Chasing a car while constantly hammering on the fire button can become tiresome after a while.

Starsky & Hutch offsets the repetitive nature of the gameplay, slightly, by rewarding you for driving in a dangerous, entertaining fashion--though it will punish you for out-and-out recklessness. Every mission puts you on a kind of a clock, though it actually reflects your "viewer rating," which is one of the game's many self-aware nods to its television roots. Though it's constantly dropping, the VR can be replenished in a variety of ways. Shooting at the criminals you're chasing nets you a small amount of VR, as does having a near-miss with a civilian vehicle--though skidding around corners, getting up on two wheels, pulling off a jump, or blowing up some explosive red barrels give it to you in bigger chunks. You also see big VR icons in the sky and on the road. These can be shot at or simply driven over. Your VR drops significantly if you run into a civilian vehicle or building. Simply driving too close to a pedestrian also significantly lowers your VR. Curiously, your car can take an infinite amount of damage. The only two ways to fail a mission are letting your VR run out entirely or failing a primary mission objective, like protecting another vehicle.

Aside from the VR icons, there are a variety of other power-ups to drive over and shoot at in Bay City. Most of these affect your performance for a short time, giving you better tire grip, a faster top speed, or a bigger gun. There is also an icon that causes the criminals' guns to jam, and there are special event icons that usually cause big explosions or spectacular crashes. You can also find special Huggy Bear and car key icons in hidden locations. These finds can unlock some novel, if superfluous, extras.

Though there's no competitive multiplayer in Starsky & Hutch, two players can go through the game cooperatively, with one player driving and the other shooting. There's support for a steering wheel, and in the PS2 and Xbox versions, there's light gun support as well, further augmenting the arcade feel of the game. This option is less enjoyable on the Xbox because you're forced to use the shoddy Mad Catz Blaster--the only Xbox light gun currently on the market. Either way, though, the co-op play in Starsky & Hutch feels tacked on, and, ultimately, isn't as fully conceived or enjoyable as the single-player game.

Starsky & Hutch is powered by Criterion's venerable Renderware engine, and it makes pretty good use of the technology. Bay City is a good-sized, clockwork city with a level of detail that falls a bit short of what we've seen in the Grand Theft Auto games--though there isn't nearly as much interactivity in Bay City as in Liberty City or Vice City. The inhabiting pedestrians and automobiles aren't nearly as dynamic either. The general look of the game is just shy of realistic, instead looking more like a series of Hollywood backlot sets that have been stitched together. When you consider the game's TV roots, this seems fitting, however. There are some other visual touches that further evoke the cop-show feel, like the dramatic slow-motion angle the game cuts to during a big jump or the way the camera swings extra wide around corners, giving you a sense of increased momentum. The cutscenes between missions are rendered in a fashion that looks an awful bit like simple Flash animation. It has its own sense of style, though some might find the limited amount of actual animation to be cheap-looking. The Xbox and PlayStation 2 versions of Starsky & Hutch both exhibit some occasionally choppy frame rates, though nothing show-stoppingly bad. The PC version performed without a hitch on a high-end machine, even with all of the graphics options completely maxed out.

The sound design in Starsky & Hutch is really the factor that brings the whole package together. Antonio Fargas reprises his role as Huggy Bear and acts as the game's narrator, who pops up from time to time within the game. Fargas is the only actor from the TV series to appear in the game, though the actors used for Starsky, Hutch, and the captain all turn in fair approximations of the original actors. The dialogue they're given is pretty standard cop-show material; it's sometimes a little clever, sometimes a little cheesy. The music, which consists of several themes borrowed from the Starsky & Hutch TV show, as well as some original compositions, is an amazing collection of 1970s-style funk. Full of wah-wah guitars, funky walking basslines, and vintage synthesizer sounds, the music in Starsky & Hutch does a particularly good job of immersing you into the game. Some of the in-game sound effects are pretty good, like the tire screeches and the engine sounds. Unfortunately, the gun effects, which are probably the sounds you hear most in the game, sound tinny and hollow and don't carry much impact.

The strangest thing about Starsky & Hutch is that it's based on a TV show that's older than a good majority of the game's potential audience. Though specific nostalgia for Starsky, Hutch, the Striped Tomato, and Huggy Bear may be lost on most of the game's players, the game does a pretty capable job of capturing a bit of the vibe from that era. The game's main story mode isn't longer than a weekend rental (for console gamers, anyway), and there isn't much to go back to once you wrap that up. 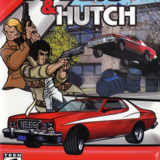