We've battled ferocious humanoid felines. We've incinerated countless stormtroopers. We've certainly stopped a number of ancient, seemingly omniscient species from invading our galaxy. But never before in a space sim have we fought the Western World's pesky 20th-century adversaries, those Sputnik-launching Ruskies. Yet in spite of the implausible premise that 160 years from now the Cold War will suddenly reignite in a conflict that will span our solar system, Digital Anvil's debut game is an enjoyable story-driven space combat sim that should meet, but not exceed, the lofty expectations of fans of the developers' previous games.

The reason that expectations for StarLancer are so high is, of course, because Digital Anvil was founded by a team of developers led by Chris Roberts, who had effectively launched the space-sim genre with the Wing Commander games. While Chris Roberts has been focusing on the development of the far more ambitious Freelancer, his brother Erin Roberts and UK developer Warthog have crafted StarLancer. Warthog and Erin Roberts had previously combined their efforts to produce Privateer 2: The Darkening. The influences of that game and the Wing Commander series are quickly evident in StarLancer, a very traditional space sim.

StarLancer has many of the same strengths and a few of the weaknesses of the previous products of the developers. While other space sims, such as the games in the X-Wing series and, more recently, the FreeSpace games, have made their star-hopping conflicts largely impersonal affairs, the Wing Commander games have focused far more on the experiences of individual pilots. Both approaches have advantages. By personalizing the conflicts, the Wing Commander games make you empathetic to the struggles of the protagonists. On the other hand, by maintaining a more distant perspective, FreeSpace 2 and similar games provide a more strategic view of the games' respective conflicts.

Interestingly, StarLancer straddles both of these approaches. StarLancer's compromise between these extremes works exceptionally well, as it conveys the significance of the epic battles in an intimate manner. You'll never get to know the personalities of your wingmen in StarLancer as well as Wing Commander players know the quirks of wingmates such as Maniac, but your fellow pilots are also not as faceless as they are in most other space sims. In StarLancer, there are dozens of personalities whom you'll eventually become acquainted with - from your wingmen peers to wartime politicians, StarLancer's characters collectively provide you with a range of perspectives from which to view the conflict. There are a number of particularly memorable characters, including a Red Baron-esque German ace and a traitorous fellow pilot - of course, you couldn't possibly have a game produced by the creator of the Wing Commander series without a traitor subplot.

While the premise of a 22nd-century war with the Russians seems ludicrous, and their Eastern Coalition's conduct consistently lives up to our lowest expectations in the campy manner of a Roger Moore Bond flick, its instant familiarity is actually a great strength of StarLancer. Instead of hearing of the exploits of another faceless squadron as in the FreeSpace games, you will instead be provided with insight into the exploits of readily identifiable groups of characters through StarLancer's war updates. It's easier to become empathetically and emotionally involved with the characters when you see recognizable modern imagery. It's an effective gimmick.

Unfortunately, the primary flaws of the developers' previous game, Privateer 2, have also been incorporated into StarLancer. StarLancer's flight model is quirky, and it doesn't convey the sensation of moving in 3D space as smoothly as in most recent space sims. The performance variances between the different flyable ships aren't as pronounced as you would expect, given the ships' respective ratings in various specifications. This perceived problem may have just been exacerbated by the inept artificial intelligence of the computer-controlled pilots - enemy ships fly straight at you and then begin turning, ineffectively trying to home in on your ship. When you're around large capital ships or other objects, the computer-controlled ships really display their incompetence as they constantly smash into fixtures or remain relatively motionless. Unless you doze off and consistently travel in the same direction for a prolonged span of time, your impotent computer opponents will be unable to dent your ship's shields and armor. Since Warthog seems to prefer equipping the fighters in its games with rapidly firing, devastating gunnery, dogfights in StarLancer tend to be pathetically one-sided affairs. Clint Eastwood never had it this easy in Firefox.

However, completing your mission goals isn't as simple as dispatching your foes, primarily because of StarLancer's limited heads-up display. Most missions devolve at some point into protecting a few friendly ships or smaller objects, but the HUD and interface make it extremely difficult to maintain contact with the ships or objects you are supposed to defend. There's no way to program the interface or set up the HUD to allow you to quickly target those friendlies to check their conditions or locations. In addition, rather than having you rely on the same, familiar 3D radar used in the Wing Commander games (or to adopt the even more intuitive system used by the X-Wing games), the developers felt it was appropriate to develop yet another form of 3D radar. Unfortunately, they've managed to concoct the least accessible system yet. Rather than being foiled by the magnificent flying or superior weaponry of your opponents, you'll usually find yourself failing mission goals because of inadequate situational awareness. The interface and HUD aren't a significant step backward compared with those offered by the Wing Commander games, but they are inadequate given the additional complexity of StarLancer's missions. Simplistic mission design has always been a complaint justly hurled against the Wing Commander games, whereas StarLancer's complex missions are fantastic. Much of StarLancer's story is conveyed through events that occur within missions, and there is a tremendous amount of mission-specific dialogue. Each mission also contains several scripted events depicted from within the game engine. Independence War veterans will be familiar with this effective technique, which always ensures that you get the opportunity to see significant mission events from the best camera perspective. The technique works extremely well at convincingly conveying plot developments without abruptly removing you from the gaming world.

Mission goals are also well varied in StarLancer, and even though the game treats heavy bombers as capital ships, you'll still get plenty of opportunities to bomb large targets. While there aren't as many missions in StarLancer's campaign as there are in a typical space sim, StarLancer's missions are frequently lengthy, so the campaign doesn't feel short. The length of some of the missions also makes the lack of an option to save the game within missions a more notable omission. While no games in the genre have offered the opportunity to save a game within the heat of a battle, since there are usually several stages to each StarLancer mission, the opportunity to save after each stage (an option recently offered in Independence War Deluxe) would have been particularly useful. Still, one of StarLancer's best attributes is its mission design.

StarLancer's graphics and sound are also its strengths. While the musical score pales compared with the haunting tracks in the FreeSpace games, the epic Wing Commander scores of George Oldziey, or the familiar riffs of the Star Wars games, the sound effects in StarLancer are excellent. The ominous sound of a torpedo launch and the screech of a rocket launch are particularly distinctive. StarLancer's graphics are outstanding, and they make exceptionally good use of lighting effects. While ship design isn't inspired - most vehicles are blocky abstractions of each other - some of the fighters have moving components, and the textures are universally detailed. The explosions are convincing, and they create a ton of realistic debris, occasionally including the corpse of your hapless victim. Most capital ships are disappointingly small compared with the dreadnoughts that roamed space in Wing Commander Prophecy or FreeSpace 2, and they lack equivalents to the visceral beam weapons and flak cannons of the ships in the latter game.

StarLancer also offers a number of multiplayer features including, most notably, the opportunity to play through the main campaign cooperatively. Only the X-Wing vs. TIE Fighter expansion Balance of Power previously offered a significant multiplayer campaign to space-sim players, and the gameplay is considerably smoother in StarLancer. Unfortunately, the multiplayer chat dialogue line only lets you type in short sentences, and if you choose to play as a pilot you've created for the single-player game, you'll get mission statistics that are confusingly combined with your single-player results. Pilots keep all of their achievements when starting a new game in either single- or multiplayer, which gives you the advantage of accessing the more powerful fighters in the game prematurely. There is also a handful of competitive multiplayer games, several of which can be played in teams. The competitive multiplayer games include ship power-ups, and they generally emphasize gameplay commonly found in first-person-perspective shooters.

There are no stand-alone missions (in either single- or multiplayer) and there's no way to replay missions you've already completed unless you choose to revert to a game you've manually saved. Some of the game's story elements outside of the missions are tedious, such as walking around your spaceship and watching the newscasts, and the flight models and pilot artificial intelligence aren't up to the genre's standards. But the scripting and story elements within the missions, combined with the immersive graphics and sound effects, still make the campaign engaging. Because of its origin, it's not surprising that StarLancer's strength is its story-driven campaign. While it's a shame that the developers did not fix all the weaknesses that were also found in prior games such as Privateer 2, StarLancer definitely matches, and in several ways improves on, the strengths of those games. 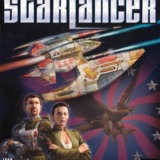 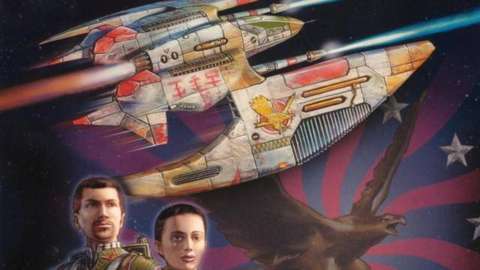 The less than engaging storyline and the heavy focus on defensive missions holds the game back and keeps it from being as good as the classics that made the genre popular.