If you've been playing games for a long time, you might remember an old NES title called Clu Clu Land. It starred a strange little fish-lady named Bubbles that constantly swam her way through a playing field, trying to find hidden gold ingots, as well as avoid traps and obstacles. The only way you could control Bubbles was by pressing and holding down a button to have her cling to poles scattered throughout the level, making her spin around in circles until she faced the direction you wanted her to go--at which point, you'd release the button. It was an interesting concept, and it appears to have provided a lot of inspiration for Beatshapers' Stardrone. The setting might be completely different--rather than guiding a fish though an undersea maze, you maneuver a ship through colorful star labyrinths--but the central game mechanic of latching onto things and spinning around them to direct a constantly moving object through a 2D maze is exactly the same. That's not to say that Stardrone is simply NES-era gameplay dressed up in a current-generation shell. As basic as the core mechanic might be, there are additional gameplay elements and ideas present in Stardrone that would have never been possible all those decades ago. Unfortunately, none of them serve to elevate the game beyond just moderately entertaining.

Stardrone features more than 50 different stages to challenge players. Each features a different objective, such as collecting or reactivating objects scattered around the stage, reaching a goal, or destroying a set number of enemies, as well as a unique design laden with tricks, traps, and other elements. The central control scheme in each of these levels is the same: Rather than assuming direct control of your ship, you press and hold either the X button or down on the D pad to tether the ship to an onscreen hub unit. The ship will then orbit the hub until you release the button, sending it flying in what is hopefully the direction you want to go. When there are multiple hubs onscreen, you select which one you want to try to tether to by moving and holding one of the analog sticks in its general direction. Should you own a PlayStation Move, you can opt to play Stardrone using a different control scheme, where you press the Move button to tether and select which hubs to attach to by pointing at them.

The mechanics and controls are pretty simple, but the stage designs themselves are what add complexity to Stardrone. The diminutive levels are meant to be played and replayed for high scores, better times, and complete mastery. Items, boosters, barriers, traps, and enemies litter the stages, and as you play further into the game, more elements get added to ramp up the complexity. Some of these design elements are quite fun, like the speedy conveyor-belt walls and the supersonic blast vents. These send your little ship speeding through the stage at dazzling speeds; that is, until the point where you're happily zipping along and then smash headfirst into a wall of spikes with little warning. More often than not, the elements that get introduced throughout Stardrone's level progression wind up being more frustrating than challenging or fun. Instant-kill traps begin to line the entire stage boundary, barriers block the way unless you scour the stage to find keycards, and enemies seem to gang up on you and make movement impossible without taking lots of damage. Don't expect many resources to combat these hazards, either; grabbing hubs to avoid traps is difficult when you're zipping along at super speeds, and you can only crush your enemies after entering into Comet Rush mode by collecting a set number of star items in rapid succession (which is often easier said than done).

When it comes right down to it, a lot of aspects of Stardrone just seem poorly implemented. The bright, trippy visuals are appealing, but oftentimes, the overdose of color and background imagery can make important things, like collectible stars needed to finish some stages or your pointer cursor when using the Move, very difficult to see. The physics and speed-booster elements in stages can also be irritating: It's more difficult to remain tethered to a hub when your ship is travelling at high speeds. If you're being blasted around and need to try to tether to stop yourself from smashing into a wall of deadly spikes, it can also be difficult to point to the hub you want to grab in time, particularly with the Move. The Move controls are fine in relatively trap-free stages, but in high-speed danger zones, it's tough to quickly point to where to attach. On top of it all, the difficulty fluctuates wildly at times. Sometimes you'll encounter a very easy level immediately after a stage where your controller-chucking rage will barely be held in check.

As it stands, Stardrone is a decent action/puzzler. It can be a nice diversion at times, but it lacks the sort of well-designed dressing needed to make its simple core mechanic feel fresh, interesting, and fun. Stardrone seems destined to be forgotten amongst a sea of far better games available on the PlayStation Network. 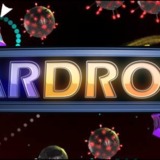