There are some choice moments in Star Wars Trilogy: Apprentice of the Force, but they don't come up as often as they should in this short action game.

With Star Wars Trilogy: Apprentice of the Force, Ubisoft set upon the ambitious task of condensing the events from all three of the original Star Wars films into a single game. You get to experience the story from Luke's point of view and will ultimately run, jump, shoot, and slash your way through more than 50 levels spread across 10 chapters. The game does a good job of switching between blaster-focused, lightsaber-focused, and vehicle-focused stages, and it does succeed at getting the main points of the story across. Unfortunately, though, the combat is shallow and repetitive, and, as a whole, the game is awfully brief--perhaps five hours from beginning to end.

A good many of the levels adopt the typical side-scroller formula, where you have to guide Luke from one end of the level to the other by jumping over open pits, climbing up ledges, and gunning down any stormtroopers that get in his way. At frequent intervals, the background will stop scrolling and multiple stormtroopers will appear from all sides of the screen. These mob battles are fun at first, since they let you lay waste to dozens of foes at a time. But they become tiresome rather quickly, mainly because the enemies pretty much just stand there while you shower them with blaster shots. Dying isn't really a concern--laser blasts hardly consume any of Luke's health meter, stormtroopers are always leaving health packs behind when you kill them, and, if you do somehow manage to run out of health or fall into a pit, the game lets you continue from the beginning of the level without penalty. This is how most levels play out, with a few difficult jumps, some backtracking in and out of rooms, and a boss battle thrown in here and there.

Fans of the movies will appreciate how the game looks and sounds. Places like Mos Eisley, Hoth, Dagobah, and Cloud City closely resemble the locations from the films. Luke, the other character sprites, and many of the structures in the foreground are drawn in a cel-shaded style that looks really good on the GBA's tiny reflective screen, and the animation itself is a joy to watch due to the high number of individual frames that make up each character's movements, attacks, and transitions. Most of the story is told through text overlays or cutscenes at the end of each chapter that feature snapshots from the films made up to look like holograms. The musical score is a combination of tunes taken from the films and original music composed specifically for the game. The new music fits right in with the tone and subtleties of the now-classic John Williams-composed themes. For the sound effects, Ubisoft recorded the noises and voices that were in the films and simply dropped them into the game. Things such as blaster shots and lightsaber clashes sound just like they do in the movies, and fans will be tickled to hear voice effects like the Jawa "booteeny" cry and Vader's mechanical breathing.

Even though most of the game's levels stick to the same dull side-scrolling design, not all of them do. In some levels, you have to protect R2-D2 and Princess Leia while they follow you around and unlock doors. A portion of the Hoth battle has you ducking under the gigantic legs of Imperial walkers (AT-ATs) as they slowly trudge their way toward the rebel base. There are also a couple of vehicle-based levels. The final chapter of A New Hope includes an X-Wing segment that initially plays like an enhanced version of Asteroids, in which you're dogfighting three-dozen TIE fighters, but then switches to a traditional side-scrolling shoot-'em-up viewpoint for the famous trench run on the Death Star. The second chapter of Return of the Jedi includes a speeder bike segment that's similar to the trench run, except it involves outrunning Imperial scouts and moving up and down to avoid oncoming tree limbs and rocks.

Another plus in the game's favor is that, while the enemies don't have many attacks, Luke has a healthy selection of different moves. In the first chapter, you're limited in what you can do--you can run, jump, crouch, shoot, and tap the L button to tilt Luke's aim, and he'll automatically grab onto ledges if he's close enough. Each subsequent chapter adds one or two more skills to Luke's repertoire, so that by the end of the game you can also dash, somersault, execute a double jump, and use four different force powers. From chapter four (Hoth) onward, you also have the option of switching between the blaster and Luke's lightsaber, which you can swing by pressing the B button and use to reflect enemies' shots by holding the L button.

Due to the tedious nature of the standard side-scrolling levels, especially the endless monotony of the mob-fight sequences, the last chapter feels like it takes forever to get to, when, in reality, most players will blow through the game in five hours or less. After you finish the game, you'll be able to replay any of the vehicle levels and boss encounters whenever you like, which is an interesting design choice, considering that these sequences are also the only aspects of the game worth revisiting. You'll also unlock a sketch-and-photo gallery for your trouble. The main menu includes an X-Wing combat game--identical to the X-Wing segment in the A New Hope chapter--that two players can play by linking together two GBA systems. Only the one cartridge is required. It's a nice bonus, but doesn't make up for the fact that this game will probably end up back on a shelf someplace before a weekend is up.

There are some choice moments in Star Wars Trilogy: Apprentice of the Force, but they don't come up as often as they should in this short action game. The levels that have you doing something other than mindlessly killing stormtroopers are very fun, and a few of the boss battles--namely Boba Fett, the rancor monster, and Darth Vader--just beg to be played over and over again. It's just a question of whether or not you feel like enduring 40 so-so levels in order to experience the 10 really good ones, which, to the game's credit, you can jump right into once you've completed the game. 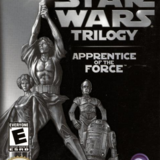 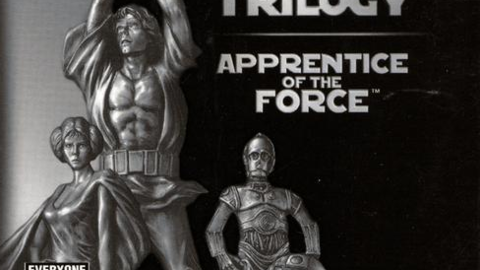 There are some choice moments in Star Wars Trilogy: Apprentice of the Force, but they don't come up as often as they should in this short action game.

7.3
Sign In to rate Star Wars Trilogy: Apprentice of the Force