When you're playing an action game, the last thing you want to do is to stand around regaining stamina while there are still aliens left to fight.

The story line for Star Wars: The New Droid Army occurs after the events in Star Wars: Episode II Attack of the Clones. Count Dooku has escaped and is amassing a droid army to replace the one that was demolished by the Republic's clone troopers. Playing as the now-adult Anakin Skywalker, your task is to follow Dooku's trail and foil his plan. This is an action game, so the search invariably entails a great deal of running around, swinging a lightsaber, and generally scrapping every battle droid that hobbles into view.

For the most part, the basic formula works fine. There are numerous droids and aliens to fight, which gives you plenty of opportunity to use Anakin's lightsaber to attack or reflect incoming blaster shots. As you pass each successive area, you'll earn a new force power that can help you later on. There are five such force powers in all, including the dash, jump, and push skills you've seen in the movies, as well as two others: the ability to heal faster and the ability to remain invisible for extended periods. Just as your stamina decreases when you're attacked, your force power also diminishes after every use. Since there are no health or force items to collect, the only way to recover stamina and regain force power is to stand still until both indicators are full again.

Therein lies the main flaw of Star Wars: The New Droid Army--it is so very boring. When you're playing an action game, the last thing you want to do is to stand around regaining stamina while there are still aliens left to fight. For every dozen enemies you'll encounter here, you'll need to waste a good 30 seconds or so in order to handle the next set of targets. To compound matters, each of the game's roughly 12 stages is a labyrinth that forces you to search and backtrack constantly in order to find the exit. While the tilted, three-dimensional viewpoint really gives you a feel for the many alleys and corridors on Tatooine and Coruscant, the levels themselves are just too similar and too expansive. Other than taking on the droids you'll encounter and bypassing the occasional alarm system, there really isn't anything interesting to do along the way. Ultimately, the game feels like one giant hike peppered with delays and skirmishes.

It may be dull and repetitive, but Star Wars: The New Droid Army looks and sounds like you'd expect a Star Wars game to look. The graphics are colorful and three-dimensional, aided by the use of a polygon engine that creates realistic miniature versions of Anakin, the various battle droids, and numerous living characters. The animation is choppy at times, so the effect isn't as impressive as it could be--but it's still pretty sweet to see Anakin perform a Jedi flip over one of the Gamorrean guards in Jabba's palace. Likewise, the scenes in between each stage where you're flying to Coruscant or conversing with the Jedi council add a certain amount of atmosphere.

The inclusion of actual portions of music from the scores of The Phantom Menace and Attack of the Clones also helps soften the chagrin of meandering through each successive dungeon. The GBA isn't known for its audio capabilities, so it's rather nice to hear crisp renditions of "Anakin's Theme" or "The Imperial March" emanating from its speaker. The sound effects are the same blaster fire, lightsaber hums, and explosions you've heard in the films, along with a few Jawa and Tusken Raider voices for good measure.

As is true of many of the previous Star Wars games for handheld systems, Star Wars: The New Droid Army is a modest action game made better by the characters, story, and music that it borrows from the existing motion-picture franchise. It's a decent game for casual players or for die-hard fans of Star Wars, but not something to recommend to someone with a deep library of GBA games. 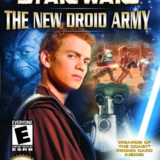