The online multiplayer mode does a fine job of extending the game's mileage, making The Clone Wars suitable at least for a rental for the casual Star Wars fan, and worth keeping for those who really enjoyed Episode II.

Last year's Star Wars: Episode II Attack of the Clones met with mixed reactions, probably because the different aspects of the film didn't always seem to fit well together. On the one hand, the romantic overtures the young Anakin Skywalker directed at the beautiful Senator Amidala were pretty awkward. But then again, Episode II featured some undeniably impressive battle sequences and truly state-of-the-art special effects. The climactic battle between the Galactic Republic's clone army and the separatist movement's legions of droids stood out as perhaps the most exciting sequence from the film. Thankfully, Star Wars: The Clone Wars seeks only to re-create these sorts of intensely action-packed scenarios. The game's been out for the PS2 and GameCube for months now, and while the new Xbox version is mostly identical, it has a key addition: online play. In the game, you get to play as several of Episode II's main characters and commandeer a number of different vehicles in a varied single-player campaign that provides plenty of shooting fun while it lasts. A number of Xbox Live-compatible multiplayer modes for up to eight players (or four players on a split-screen) round out a good, solid Star Wars game that should appeal to anyone who'd care to relive Episode II's large-scale action scenes.

The Clone Wars actually takes place after the events of Episode II, which ended with the eruption of an all-out war between the Galactic Republic and the separatists. In the game, you'll play as Obi-Wan Kenobi, Anakin Skywalker, and Mace Windu in an effort to help the Republic thwart its adversary. In so doing, you'll uncover a nefarious separatist plot to unleash a devastating weapon against the Republic, which, of course, you'll have to stop. Though the game contains a few on-foot action sequences, most of the time, Obi-Wan, Anakin, and Mace will be fighting from within the heavily armored confines of a number of different vehicles, including a hovertank, a gunship, and a walker. You'll also get to ride on a speederbike, one of those floating STAP things that some of the droids used in Episode I and Episode II, a tough four-legged creature called a maru, and more. All these vehicles--and even the on-foot sequences--make use of roughly the same control scheme, though you do get a pretty good feel for the differences of each vehicle at your disposal, mostly due to their unique special weapons.

Regardless of the conveyance at your disposal, you'll be up against lots and lots of enemy droids in every level, and they make for great cannon fodder, just like in the films. The game's 16-mission campaign isn't very long, but it does take you to a number of different Star Wars worlds, from the dusty Geonosis seen in Episode II to Kashyyyk, the woodsy home of the Wookiees, and almost all the missions are fairly different from one another. That's not to say the missions are totally surprising. Some are all-out battles against lots of enemies, some are desperate races away from or to certain points, some require you to defend convoys or installations for certain periods of time, and some are rescue missions.

Actually, many of the missions have multiple objectives that must be completed before the mission is completed. Failure (or death) will force you to restart a mission, and some of the later missions can be a good challenge at the default difficulty setting. Time really is of the essence, and you'll need to dodge, aim, and shoot precisely in order to succeed. You'll also need to keep a sharp eye out for power-ups to replenish your armor and special weapons. Since you're in an all-out war, you'll be comforted to know that you won't be alone in most of the missions, as oftentimes you'll have a friend or two helping gun your enemies down. Later in the campaign, you'll be able to issue simple orders such as "attack" and "regroup" by using the controller's directional pad.

Of further note, each level in the game also contains three bonus objectives that are purely optional. Completing them can unlock hidden extras in the game, such as new multiplayer maps. The bonus objectives range from things like completing the level in a short period of time or finding secret areas to rescuing hostages or not letting any vehicle in a convoy you're defending get destroyed. Some can be very tough, since the missions themselves are no cakewalk, so they help give the single-player game some replay value.

The Clone Wars offers four multiplayer modes that can be played with up to four players in a split-screen view, or with up to eight via Xbox Live or the system link feature. Unfortunately, there's no option to play through the campaign cooperatively, which is a bit odd, considering you're often fighting alongside computer-controlled allies anyway. The existing multiplayer modes can be fun, though. Duel is basically a deathmatch mode, allowing players to pit the game's various vehicles--and their skills--against each other. Control zone is sort of a king-of-the-hill mode in which players gradually earn points by occupying a designated area and fending off any would-be usurpers. Conquest, the most popular online variant, is a team-based game that pits the Republic's arsenal against that of the separatists, and it's reminiscent of the Battlezone PC games in its combination of action and strategic elements. You can capture outposts, which in turn build AI-controlled units that you can control using the game's simple command interface. The object is to eventually destroy the other team's base. Finally, Jedi academy is a cooperative survival mode that pits players against wave after wave of enemies.

When playing these modes online, you'll get the usual Xbox Live frills, such as the quick match mode (which you can use to quickly jump into any of the four multiplayer modes), voice chat, and a leader board with player rankings. On the other hand, you might find it difficult to get into a smooth-running game session. Though the game tries to recommend a maximum number of players based on the connection speeds of the players who've joined a session, in practice, the online multiplayer game tends to feel somewhat laggy and unresponsive compared with the single-player game. It's certainly playable and can be fun, but it isn't always the fast and responsive online gaming experience you'd hope to get over a broadband connection.

The game uses a fairly good-looking 3D engine that capably handles large maps for both ground vehicles and flying ones. The best aspect of the graphics is the way they're able to evoke the sense of being in the middle of a gigantic infantry war--you'll actually see tons of clone troopers shooting it out against tons of droids as you plow past them in your hovertank. In the gunship, you'll see some even larger-scale madness taking place far down below. If you look carefully, you can tell that most of these infantry are actually static and really are nothing more than background scenery. But it's some great background scenery, and it does a fine job of making you feel like you're taking part in those epic Episode II battles. Besides that, the game's character models and vehicle models are pretty simple, and arguably none of the Episode II vehicles rival the classic Star Wars ships in terms of design--the gunship, the hovertanks, and most of the vehicles in Clone Wars actually look rather generic. More importantly, the game's frame rate can be very unsteady, slowing down severely during what ought to be the fastest-paced moments. Overall, The Clone Wars might look slightly better than the versions of the game already available for the GameCube and PS2, but by Xbox standards, it doesn't look great. Nevertheless, its visuals certainly get the job done.

Convincing is a good word for The Clone Wars, which ultimately succeeds at making you feel like you're on the front lines of a big Star Wars ground battle. Despite some strategic elements, it really is a pure action game at heart, filled with plenty of targets to shoot at, plenty of power-ups to collect, and a good variety of tough missions to accomplish. The online multiplayer mode does a fine job of extending the game's mileage, making The Clone Wars suitable at least for a rental by the casual Star Wars fan, but worth keeping for those who really enjoyed Episode II. 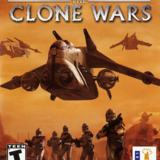 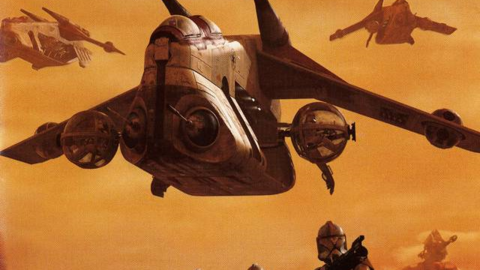 7.4
Sign In to rate Star Wars: The Clone Wars