On one hand, it's a derivative real-time strategy game. But on the other, it's a tidy little bundle of escapism that's perfect for a generation of gamers raised on Star Wars.

Star Wars Galactic Battlegrounds will send Star Wars purists into a tizzy. Tauntauns on Tatooine? Dewbacks in outer space? Naboo Fighters tussling with X-Wings that haven't been invented yet? TIE Fighters with shields? And since when do Wookiees have tanks? The Star Wars universe already requires a willing suspension of disbelief, but most fans at least expect some internal consistency.

These are hardly grounds to dismiss LucasArts' latest real-time strategy stab at the most lucrative license of them all. But they are grounds to wonder whether this is just a cheap tug at the pocketbooks of the fans or whether any thought went into this Star Wars adaptation of Ensemble's Age of Empires II engine. Although at times it seems LucasArts was being lazy, this isn't just a slapdash skin job. Rest assured that Galactic Battlegrounds has a relatively deep design with enough twists to distinguish it from Age of Empires II: The Age of Kings.

Another important difference is the addition of aircraft (oddly enough, the game uses this term for spacecraft like Naboo Fighters, TIE Fighters, and X-Wings). This sort of maneuverability was never part of Age of Kings, where infantry was slow, cavalry was vulnerable, and walls could be used to shut out invaders long enough to marshal your defenses. But once aircraft are developed in Galactic Battlegrounds, there are no such guarantees. Antiair units come into play one tech level earlier than air units, so there's plenty of time to anticipate an aerial threat. But this adds a whole new layer to the basic mechanics of Age of Kings.

Another new layer that doesn't come into play as often is stealth. There are a few units, such as advanced Jedi masters and some Gungan submersible boats, that can't normally be detected. Later in the game, the tide can be turned by sending a stealthy Jedi master into a base to convert a key structure, like the power core that powers a shield generator. It should have made for some very intense moments in the manner of Obi-Wan deactivating the tractor beam on the Death Star in the original Star Wars film. However, stealth is easily countered. Turrets can see Jedi, and many boats can see Gungan subs. This makes stealth a feature that looks good on paper but doesn't have much impact on the game.

However, shield generators and Jedi are additions with significant impact. The former are clever additions to the Age of Kings gameplay that add a regenerating layer of hit points onto any unit or building within a certain radius. You need a power core near your shield generators in order for them to operate, though. The Gungans actually have a portable shield generator on their unique unit. Some units have built-in shield generators, and other units can research them later in the game. Meanwhile, Jedi aren't just Age of Empires' monks. Although they can convert enemy units to their side like Age of Kings' monks, they're not as frail--with their lightsabers, they're powerful melee fighters that can easily take on superior numbers. The game counters them with bounty hunters, whose ranged attacks are especially powerful against Jedi. Each of Galactic Battlegrounds' six sides gets Jedi and bounty hunters.

Because each side has essentially the same forces, Galactic Battlegrounds sometimes feels like it's not doing justice to the rich potential of the Star Wars universe. Would it have killed LucasArts to make the sides substantially different? In Age of Kings, the Britons don't vary too drastically from the Celts because, well, they're both human civilizations that evolved along similar lines. But the only real excuse for the Gungans and the Galactic Empire being so similar is that this is the way Age of Kings did it.

There are other areas where it feels like LucasArts isn't even trying to mask Galactic Battlegrounds' foundation. Although the resources have names like "carbon," "nova crystals," and "ore," they're clearly the counterparts to Age of Kings' wood, gold, and stone. The maps feature suitably Star Wars-sounding muja berries, banthas, and falumpsets, but these are found in environments otherwise covered by pine trees, oaks, and palms. You'll even occasionally hear Age of Empires' chirping cricket effect, which tends to break the mood when you're on the surface of a barren asteroid. Galactic Battlegrounds replaces trebuchets with cannons, but they're the same-old ponderous long-range siege engines. Whereas trebuchets had to be "unpacked" to fire (hotkey U) and "packed" to move (hotkey P), cannons have to be deployed to fire (hotkey still U) and un-deployed to move (hotkey still P). Instead of a town bell to call your workers to safety, you use an "alert beacon." Instead of relics that generate gold when carried into a temple, you have "holocrons."The direct similarities to Age of Kings are plentiful. LucasArts has licensed the engine--it might as well have stirred it up a bit more.

There are certain conventions from Age of Kings that don't carry over very well into the Star Wars universe. Instead of peasants, you use worker droids to harvest resources--but it still costs 50 units of food to build one. Food to build a droid? If you read the manual, you'll find some nonsense about having to feed ugnaughts. The way spacecraft are modeled as swarms of hovering flies feels awfully forced. The scale of units is conspicuously off, but this is nothing that doesn't also happen in Age of Kings. Most of the time, LucasArts does a good job filling out the unit roster, even though no one knows what a Wookiee tank, a Gungan bomber, or a Rebel mech looks like. But in some instances, you get the impression that the designers just ran out of ideas.

Regardless of the problems in translation from Age of Kings, the bottom line is that Battlegrounds is a far more successful treatment of the subject matter than LucasArts' last attempt, the wretched Force Commander. One of Force Commander's biggest problems was that it was an ugly, clunky engine burdened with a bad interface. This time LucasArts should be applauded for not trying to reinvent the wheel. What a far better idea to license one of the most successful and refined RTS engines ever and just slather on a thick layer of Star Wars stuff!

And to be fair, the developers have gone out of their way to sprinkle Galactic Battlegrounds with vivid and surprising touches. The skirmish maps can be randomly generated from generic terrain or from Star Wars locations, each with distinct features. Tatooine maps are seeded with Jawa sandcrawlers that can be captured and used in combat. You'll find Yoda's hovel on Dagobah. The scenario editor gives the game enough flexibility to go wherever you want and bring along "hero" units. Whip up a skirmish game in which Luke and Yoda square off against Darth Vader and the Emperor. Have young Obi-Wan fight old Obi-Wan. Put that annoying Anakin kid on a tiny island all by himself.

The sound is fantastic, with the exception of an occasional bad voice-over. Leia and Han Solo sound bad enough, but the actor voicing Lando Calrissian seems to think he's been hired to imitate someone from The Sopranos--Lando sounds like a goodfella. The single-player campaigns are little stories with characters from the movies. The Empire campaign, narrated by Mara Jade, spans the gap between the destruction of the first and second Death Stars as Darth Vader hunts down Luke Skywalker. Wedge Antilles narrates the more desultory Rebel campaign, with Princess Leia enlisting the aid of Wookiees and Jedi in the pursuit of some artifact. The Wookiee campaign follows the continuing adventures of Han and Chewie after the battle of Endor. The Trade Federation campaign details their struggle against the Naboo and the Gungans. Finally, the Gungan campaign is Boss Nass' recollection of his ancestors' campaign to unite the Gungan clans, followed by his own battle against the Trade Federation. Each campaign unlocks bonus missions that let you replay events from the movies. Revise history by holding off the Empire at Hoth, saving the Death Star over Endor, or overruning the Royal Naboo at Theed. Even better, kill some Ewoks or put Jar-Jar Binks at the head of a suicidal charge.

When it comes right down to it, the goal of any Star Wars-themed strategy game should be to re-create the epic feel of the battles in the Star Wars movies. We just want to watch AT-ATs lumber through the snow with stormtroopers swarming around their feet. We want to see Rebel soldiers holding the line with snowspeeders coming to the rescue. And we want to hear the Imperial marching theme or that splendid "Duel of the Fates" riff while we do it. When it comes right down to it, most complaints with Battlegrounds are easily forgotten when all this happens. On one hand, sure, it's a derivative real-time strategy game. But on the other hand, it's a tidy little bundle of escapism that's perfect for a generation of gamers raised on Star Wars. 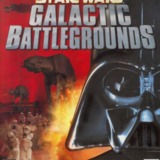