Racer for the Game Boy Color is a fun little game.

Star Wars: Episode I Racer was one of last year's best N64 racing games. So it's only fitting that the Game Boy version should follow suit. Of course, you can't expect to get the same breakneck speed and 3D graphics that graced the N64 version, but the game translates into a top-down racer very well.

At the start of the game, you'll only be able to choose Anakin. But after each victory, you add your rival's pod to your collection. So by the end of the game, you'll have a nice selection of pod racers to choose from. The track design is fairly simplistic, but it gets the job done and tosses in neat little obstacles, like huge patches of ice that make steering a real chore.

Racing is very simple. You only race against one other pod at a time, so you never get the feeling that you're totally out of the race after a bad wreck. The turbo boost helps you catch up, but it, along with collisions with the other racer, saps some of your pod's precious energy. You can raise your energy level if you must, but your top speed is greatly reduced while charging, so it's better to just use your power wisely and make it last.

Visually, the game trades graphical sheen for speed. The game moves along at a very fast pace, but the pods look pretty ugly and the tracks are pretty plain. The sound is also a fairly grating collection of buzzing noises meant to represent engine noise. You can, however, hear the rival pod closing in on you from behind, so it's at least functional.

Racer for the Game Boy Color is a fun little game. It's not the sort of thing you'll find yourself playing for months on end, but it's one of the better racing games to grace the system. 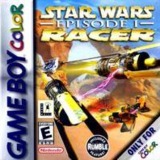