Forces of Corruption is a great addition to the Empire at War saga thanks to an interesting new faction that offers up a different way to conquer the galaxy.

Many true Star Wars fans had been waiting years for the strategy game Star Wars: Empire at War. Forgetting all about Jar Jar Binks and the prequel trilogy, Empire at War plunged you into the heart of the Galactic Civil War seen in the original trilogy, with its Imperial Star Destroyers, Rebel scum, and popular characters, such as Luke Skywalker and Darth Vader. Thanks to epic land and space battles, as well as an intriguing strategic campaign, Empire at War is one of the best strategy games of this year. So it was perhaps inevitable that we come to Forces of Corruption, an expansion pack that plunges you deeper into that galaxy far, far away with a distinct new faction and new content that allow for whole new strategies.

Forces of Corruption explores the seedy side of the Star Wars universe, the place inhabited by crime lords, bounty hunters, smugglers, and, yes, even Han Solo. You play as Tyber Zann, a criminal overlord with a grudge against Jabba the Hutt and the Empire, with no love for the Rebels either. After busting out of Kessel's infamous spice mines, Zann has to build a criminal empire to take down his enemies. Whereas the Empire fights for order and the Rebels fight for freedom, Zann fights for profit, which means that you tackle the campaign of conquering the galaxy in a unique way compared to the strategy that the Rebels and Imperials pursued in Empire at War. While the Rebels and Imperials fought for control of planets by engaging in epic land and space battles, you have another option open to you.

The consortium doesn't really seize planets but instead "corrupts" them, which lets you siphon off cash from their coffers. These corruption missions are one of the neat elements in the game, because to corrupt a planet, you have to execute a special type of criminal act, such as space piracy or kidnapping, which means you get to engage in a unique land or space battle. For example, you might need to take out a key vessel that is defending the planet or destroy a certain number of structures on the planetary surface. Once a planet is corrupted, you can launch sabotage missions to cripple the planet's defenses, unlock new ships and technologies by purchasing them on a black market, and more. Also, consortium fleets can slip past corrupted planets through bribery, which means the consortium is capable of launching strikes deep into enemy territory.

This corrupting style of gameplay takes a bit of getting used to, but thankfully the expansion's campaign does a good job of introducing you to all the basics while immersing you into the rich lore of the original trilogy and the aftermath as told in the various novels. Familiar faces, such as the bounty hunter IG-88, Prince Xizor from Shadows of the Empire, and the popular Grand Admiral Thrawn from the Timothy Zahn novels, make appearances. However, there are new faces as well, such as Silri, a Force witch with an agenda of her own, and Urai Fenn, a lethal alien sidekick. Also, Zann makes for an interesting antihero because he's incredibly ruthless but with a bit of a humorous streak in him.

Forces of Corruption weaves these characters into a campaign that's more cohesive and better told than the campaigns found in Empire at War. The expansion is set just prior to and after the Battle of Endor, and with the death of the Emperor and Darth Vader, there are opportunities for those who are strong enough to seize them. The plot takes you on a virtual tour of the galaxy, where you'll engage in various quest missions in orbit around planets and on their surfaces to uncover the secrets of the Emperor's vaults. One mission requires you to salvage data pods from the wreckage belt of the original Death Star, while another mission has you running through the Emperor's personal museum. This lets you explore some interesting parts of the Star Wars galaxy, though some of these missions are a bit drawn out. Thankfully, the speed buttons let you accelerate the gameplay, which makes it less annoying when you have to wait for your units to weave their way around the map.

As you might expect when dealing with smugglers and criminals, intrigue and skulduggery abound in the plot. However, coming in at under 10 hours, we wish that the campaign weren't so short and that it didn't end so abruptly because the game leaves a number of plot threads in the air and gives you the feeling that there's a second expansion in store. The bigger issue, though, is that there's a price to be paid for some of the huge battles and missions that you'll undertake. The performance of the game is terrible at times, and the frame rate can be slower than Jabba the Hutt running a marathon. Even with most of the graphical detail settings set to low, the expansion had frame rate issues running on a midrange machine that ran Empire at War just fine with the details set to high. Of course, your mileage may vary, and on a high-end system the frame rate smoothed out nicely.

In skirmish and multiplayer mode, the consortium is a formidable faction, even as jumbled as it may seem. You can have destroyer droids (as seen in The Phantom Menace), mercenaries, Force witches that ride rancors (like the kind that tried to eat Luke in Return of the Jedi), and the ewok handler, which should be a favorite as this unit straps bombs on those cuddly ewoks and then sets them loose. In space, the consortium features an array of incredibly powerful ships that can slug it out evenly with the best the Empire and the Rebels have to offer. In fact, skirmish games against the consortium proved to be a lot tougher than anything we experienced in Empire at War. And then there's the awesome Super Star Destroyer and the Eclipse, a massive new type of Super Star Destroyer.

There's a fair amount of new content in Forces of Corruption to keep you busy, even if you're a fan of the existing Rebel and Imperial factions. There are plenty of new units and abilities that you can bring into play. For example, each faction can call upon orbital bombardment to soften up targets during ground battles, assuming that faction has ships in orbit. The Empire now has speedy TIE Interceptors as well as Dark Troopers, which are elite infantry units clad in power armor, while the Rebels get the cool B-Wing fighters and the Jedi master Yoda, to name just a handful of the new units. It's also now possible to place your planetary structures, so you can position your key buildings behind layers of defensive turrets. You can also build bunkers and special transport vehicles to garrison infantry in, and in the case of the latter you essentially get a mobile bunker. All of this shines in the galactic campaign, where you can control any faction any try and conquer the galaxy. Adding the third faction suddenly changes the cat-and-mouse game of Empire at War into a cat-and-mouse-and-dog game, upping the challenge considerably. If you exhaust yourself going after one faction, the other will take advantage of that.

Meanwhile, the excellent production values from Empire at War remain the same, and you'll once again be immersed in the frenetic space battles and intense land battles of the Star Wars saga while the familiar and soaring Star Wars musical score plays in the background. And the battles are even larger than before, or at least, they feel that way when the Super Star Destroyer is on the screen. You can't help but be impressed when it hyperspaces in with a flotilla of Star Destroyers and smaller escorts.

Most expansion packs either add much more of the same content, or try to shake up the gameplay by introducing new ways to play the game. Forces of Corruption offers a little of both, as you can still enjoy controlling the forces of the Rebels and the Empire, but you can also have fun being a criminal, too. Aside from the performance issues, if you put it all together, this is a great entry in the Empire at War saga. 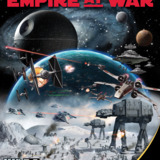