Renegade Squadron is an improvement over its predecessor in almost every way.

If you liked Star Wars: Battlefront II on the PSP, you will love Star Wars Battlefront: Renegade Squadron. It's got everything its predecessor was missing: a real campaign, online play, and true customization. It's still got some control issues and doesn't stray very far from the formula, but all told, this is a satisfying action game that will provide dozens of hours of enjoyment to people who like to shoot things in games.

Renegade Squadron is primarily a multiplayer third-person shooter. It includes ad hoc play for up to eight players, a nice advance over Battlefront II's four-player limit. Yet the game's biggest improvement, by far, is the inclusion of online infrastructure play for up to 16 players. There are several modes to choose from, but the meat of the game, as before, is the conquest mode. If you've played any Battlefront or Battlefield game, you'll know how this works. Two teams fight for control of various capture points scattered across the map. Each team begins with a certain number of tickets, and as players respawn, tickets are removed from their total. To win, you either capture all the control points or bleed your enemy's tickets down to zero. There are a number of familiar maps to play on; some are reworked from Battlefront II, while others, like Saleucami and Boz Pity, are new. It's too bad there aren't more new maps, but there are a total of 15 ground maps in total, so there is still plenty of variety. There are also online leaderboards that let you check out how you rank against other players.

These battles are intense affairs, and you aren't limited to running around on foot. You can jump into speeder bikes, AT-STs, hovertanks, and even AT-ATs (used memorably on the Hoth map). If there aren't enough human players on the server, the game will fill out the teams with bots, so you're always guaranteed an action-packed battle, even though the bots are generally dumb and easy to take down.

Rather than pick a class before entering battle as before, you now have 100 credits to spend on items and upgrades. You can spend credits on primary or secondary weapons, explosives, power-ups (like the ever-helpful rage, which increases your damage), and more. In short, you can customize your character to your play style--and even better, you can make changes on the fly at any captured spawn point. So if you're being dogged by an AT-ST, you can switch from your blaster rifle to a rocket launcher, which should dispatch the chicken walker in no time flat. It's tempting to go for the high-powered weapons, but even items that don't sound particularly helpful at first have their uses. For instance, that jump pack doesn't sound too interesting until you find out how hard it is to hit a guy leaping around in one. Many maps are available for play during the Clone Wars, as well as the Galactic Civil War era. There are also a total of four factions: Rebel Alliance, Empire, Republic, and Confederacy. You can customize each of your four avatars separately, though the loadouts are all exactly the same between them. However, you can customize their looks, choosing from a variety of heads, bodies, armor colors, and insignias.

There are other modes besides conquest, such as capture the flag and hero capture the flag, in which you turn into a recognizable Star Wars hero when you grab your own flag. Most notable, though, is the assault mode, which puts you in the cockpit of a space vessel and sends you off into the galaxy to attack the critical systems on your enemy's capital ship. Space battles are a good deal of fun and put you behind the controls of such familiar ships as X-Wings and TIE Defenders.

However, these matches don't get as sleekly chaotic as the ground battles because of the way aiming works. If you play any single-player maps on standard difficulty, you are able to initiate autopilot, which automatically targets a foe and sends your ship in its direction. However, on elite difficulty and in all multiplayer matches, autopilot is replaced by camera lock, which focuses the camera on your enemy but requires you to use the analog button to target. By nature, it requires more skill, which is fine in and of itself. However, the camera will rotate then jump around as your enemy flies about, sending your targeting reticle off the screen and making it hard to get your bearings.

Ground controls are a little easier to deal with, thanks to a new control scheme that isn't perfect but is a bit of an improvement over Battlefront II. In the default scheme, you move and turn using the analog stick. If you want to strafe, you use the analog stick while holding the R button. The R button also allows you to lock on to targets, while the L button lets you jump and sprint, depending on whether you tap it or hold it. It works just fine most of the time, but it does have some issues. Turning speed is generally slow, which is a pain when you can see on the minimap that there is an enemy right behind you, but you can't turn quickly enough to avoid being blaster fodder. Another issue is the targeting itself, which can be mighty painful when there is an AT-AT on the screen. It's easy enough to cycle targets using the D pad, but when you first hold the targeting button and there is an enemy towering above you, it may lock on to that target. If you exit targeting mode, your view will remain on that target for a few seconds before snapping back. Those precious seconds can mean the difference between life and death. If you are more comfortable with the original's default scheme, you can use that too, though the more enjoyable retro scheme of Battlefront II is nowhere to be found.

If you decried Battlefront II's lack of a true campaign, you'll be delighted to find one here, though it's not long or terribly interesting. You play as Commander Col Serra, who recounts his days of derring-do with the top-secret Renegade Squadron to researcher Tionne. His story is a good introduction to the maps and it's accompanied by lovely static cutscenes--just don't expect any insights into the Star Wars universe. The story is fairly bland and serves as a way to get you into a number of famous battles as a hitherto unknown character. The useless challenge mode is thankfully gone, though the satisfying Galactic Conquest mode remains. This mode is a combination of turn-based strategy, assault, and conquest, in which you purchase troops, move them around, and eventually attack enemy planets in a bid to conquer the galaxy. When you attack, you can allow the game to auto resolve, but where's the fun in that? Instead, it gives you an excuse to pummel the artificial intelligence in conquest mode, and if you attack the enemy's home planet, you can take down a few starfighters too.

It all looks and sounds pretty good. Renegade Squadron won't win any PSP graphics awards, but character models and vehicles are detailed. Environments, while unspectacular, also look appropriate to the setting. More importantly, the frame rate is always smooth and steady, so the action is never interrupted by visual hitches. It also sounds exactly like a Star Wars game should, with all the standard effects you've come to know and love, as well as the famous John Williams score to round it out. However, every so often, the sound will cut out for a moment or two, apparently while the disc loads content. It only happens every few minutes, but it's an annoying distraction all the same.

This is, truly, the game Battlefront II should have been--it's fun, it's full-featured, and most importantly, it's online. If you felt that its predecessor was lacking a few things, you'll find Renegade Squadron fills in many of the missing pieces. 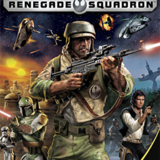