Star Trek The Video Game is a mess of bugs, glitches, and thoroughly uninspiring shooting.

The thing about Star Trek is that it has never really been about the action. Character drama and a continuing quest for knowledge have always been the show's raison d'etre over phaser blasts and exploding spaceships. Well, at least they were until J.J. Abrams got his hands on the property. And it's Abrams' action-packed, lens-flare-infused take on the Star Trek universe that forms the basis of Star Trek The Video Game, a homogeneous and vapid third-person shooter that reduces the inimitable Kirk and Spock to the role of gun-toting foot soldiers. Frankly, they deserve better.

It's not that the idea of a co-op cover-based shooter is inherently a bad one for Star Trek--even if it is a tad unimaginative--but the execution is dire. The plot sees the Federation under attack from the Gorn, a reptilian race featured in the original Star Trek series. They've been given a modern makeover here, turning from campy, rubber-masked creatures into a bunch of generic snarling monsters. They've somehow mustered the brainpower to open rips in space, and it's your job to journey from New Vulcan to the Gorn homeworld to stop them.

That involves being led through starbases, across dusty planets, and along the corridors of the Enterprise, hunkering down behind some conveniently placed cover, and shooting the living hell out of bad guys. There's little of that famed Federation diplomacy at work here: if it moves, you better shoot it. Then you move to the next room and shoot some more. This quickly grows tiresome. Aside from the jarring sight--even for the series reboot--of Kirk and Spock blasting monsters in the face with a phaser-powered shotgun, the shooting isn't that exciting.

The weapons all feel a little weedy, despite some nice "pew pew" sounds, and the Gorn suffer from some terrible AI and glitches. They often get stuck behind walls and fail to notice you shooting their compatriots, even when you're standing right next to them. Character animations are woefully bad, making it look like you're controlling some weird animatronics action figure, while your attempts to take cover often fail to register, leaving you at the mercy of the Gorn's laser fire.

Context-sensitive attempts to open doors or press buttons sometimes fail to activate, terrible signposting and waypoints often leave you with no clue where to go, and at times, your AI co-op partner disappears or gets stuck running into a wall. If that happens before you reach one of the tired co-op actions, such as prying a door open or giving your partner a leg up, then you've no choice but to restart from the last checkpoint. It's simply maddening. These co-op issues are resolved when playing with a buddy online, but despite a recent patch, matchmaking is still flaky, with connections often dropping out.

Some attempt has been made to expand on the corridor-based shooting, but the ideas are a poor mishmash of those from other games. For instance, you can try to complete each level using stealth by tagging bad guys with your tricorder and sneaking around them or by performing a silent takedown. Unfortunately, thanks to the inconsistent AI, the dodgy cover mechanic, and your flaky AI partner, trying to do so is far more trouble than it's worth.

Then there are the climbing sections that borrow heavily from the Uncharted series, offering up glinting sections of walls for you to awkwardly lurch your way along and platforms for you to leap across. The controls just aren't cut out for such endeavours, though, with the sloppy jumping making it difficult to complete these sections. There's also a slow space battle where you take control of the Enterprise's phaser turret, as well as hard-to-control underwater sections, and a level reminiscent of Portal where you're given a teleportation gun and must move your partner past obstacles.

None of these scenarios are particularly fun, and because they're poorly executed, they feel like an afterthought, rather than an integral part of the experience. The rudimentary experience-point system fares a little better, allowing you to upgrade some of your basic abilities, such as the strength of your shields and the power of your phaser. You can even hack turrets so they fire on the enemy, and jam weapons remotely. They are neat touches, but you're never pushed to use these abilities, either by the narrative or by the shooting itself, which remains very much a rote process throughout.

Star Trek's saving grace is the characters, who not only bear the likenesses of the film stars who play them, but have their voices too. Of particular note is Simon Pegg's Scotty, whose thick Scottish accent and penchant for panicking never fail to amuse. There's also some neat back-and-forth between the cold, logical Spock and the charming Kirk as they exchange quips between shots. Kirk even manages a cheeky chat-up line or two along the way.

Still, these are but small wins for a game that never does the licence justice; it's a by-the-numbers shooter that just so happens to have the Star Trek name attached to it. Its numerous bugs and linear missions make it frustrating to play, and the story never grabs you like a good sci-fi adventure should. Even the most devoted of Star Trek fans will be hard pressed to find something to like in Star Trek The Video Game: there are simply too many glaring problems. 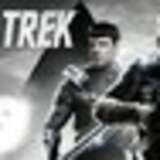