It seems like a can't-lose proposition: A Star Trek game, arriving in the year of the franchise's 40th anniversary and featuring nothing but glorious starship combat, as well as the voices of all five Star Trek captains. That sounds like paradise to Trek fans starved after an unexpected hiatus of new games over the past several years. However, if you're a Trek fan, prepare to have your hopes dashed. Star Trek: Legacy limps out of development like the Excelsior trying to chase the Enterprise in The Search for Spock. It's practically broken in some places, and if that weren't enough, it's plagued with other serious issues, as well.

Legacy puts you in charge of up to a four-ship task force of Starfleet vessels, spanning the entire breadth of Star Trek. You'll start with Archer, in the NX-01, before moving onto Kirk, Picard, Sisko, and Janeway. The plot cleverly ties together all five Star Trek franchises by using the Borg as the plot device. By chance, a typically long-lived Vulcan scientist learns about the Borg during the early days of the Federation and figures out a way to become their queen, though this quest will take decades. Along the way, she crosses paths with every famous Star Trek captain, and they attempt to ascertain what she's up to and stop her. Sure, there's a lot of revisionist history going on here, enough to make any Trek purist's head spin, but since Star Trek has always felt free to tinker with its history, it's not horribly egregious.

What will make you pound your head in frustration are the controls, which are a nightmare to learn, made worse by the way the game throws you into the action with barely any practice. You'll be flying the starships in three-dimensional space from a third-person perspective using a floating camera. However, it becomes a mess trying to figure out how to maneuver, and it's easy to get disoriented while trying to track a target in the distance. It also doesn't help that the controls feel clumsy and your ships don't respond well. Sure, they're lumbering beasts, which is what you'd expect since these are capital ships and not nimble fighters, but trying to maneuver into firing position on a target below or above you is a pain. Put it together, and you'll be in for a lot of early frustration as you attempt to get used to the control scheme and camera.

Assuming you're willing to embrace the learning curve, you'll dive into a campaign filled with some good highs but also some infuriating lows, thanks to crazy mission designs. First, you can't save at all during a mission, which means that if you fail, you have to start the entire thing over. Considering some missions can easily last an hour, the lack of an in-mission save gets annoying awfully quickly. It doesn't help that mission objectives are sometimes hazy, and you'll zoom about trying to figure out what you need to do. Other times, the mission objectives are insanely difficult, and you'll need to turn in a superhuman effort to win. A case in point is a save-the-planets mission where you have to warp around and destroy stellar debris before they crash into planets. However, the margin for error is so small that the slightest misstep can cause mission failure. And when you're busy fighting the controls, it doesn't take long before anger sets in.

Legacy also shipped with a number of game-killing bugs, though some of the worst ones were fixed in a day-of-release patch. Still, when a game releases with a bug that locks the entire game when you access the options menu, you have to seriously wonder whether it was even presented to testers. Even postpatch, there are all sorts of issues. Multiplayer is a mess. Trying to join a server is an exercise in frustration, as connecting is mostly impossible and even making the attempt often results in the game crashing. The skirmish mode might have presented some decent replay value, but it feels tacked on. For instance, skirmish mode isn't very user friendly, and there's no way to replay a skirmish game, so you end up having to create a new game again. Meanwhile, there's not much here in terms of variety. There's a deathmatch game, which you can play in teams, or a co-op wave game where all the players have to survive as long as possible against a wave of endless enemies, and that's about it.

You're almost willing to forgive Legacy of its many issues when you glance upon your favorite Starfleet vessel floating in the void. If you're a fan of the original Enterprise, the Enterprise-D, the Defiant, or any one of the many iconic starships from the show, you'll be satisfied by the level of detail that's achieved in the game. It looks even prettier during the large-scale battles, as Federation, Borg, Romulan, and Klingon starships trade fire and explode. However, even here there are issues. Smaller vessels break apart nicely, but the artists should be embarrassed by how badly anything large, like a space station or a Borg cube, explodes. The Borg cube literally breaks apart, and then a fresh cube appears in the middle of the explosion and breaks apart, and then another cube appears in the middle of that crack-up and breaks apart, before the large chunky pieces spin in place like a top twirled at high speed. Then there are the bumper-car physics. If a starship runs into anything, such as another vessel, an asteroid, or even a ridiculously out-of-scale planet, it just rubs against it and then moves on. It's these kinds of oversights that ruin the otherwise solid presentation.

Considering that Legacy boasts the voice-acting talents of all five Star Trek captains, you'd think that all the stops were pulled for the game's audio, but for the most part the efforts seem wasted, as a number of the actors sound like they're dialing it in. William Shatner does his best to infuse his unique delivery, but he also sounds every one of his 75 years at times. Only the captains' voices make an appearance, as the story is told in overly long, drawn-out voice-overs while the camera pans over ships and space stations. Riveting viewing it is not. The music is typical Trek, which means noble orchestral themes for the most part, and the sound effects are fairly authentic, though some of the phaser fire seems off. However, only hardcore Trek fans should notice these details, though they live for this kind of critiquing.

The pity is that Legacy could have been a good game if it wasn't so rushed out in such an unfinished state. The combat can be very cool at times, but the game does everything possible to undermine any goodwill that it generates. Hopefully, the developers will continue patching the game until it morphs into something more enjoyable, but as it is, Legacy isn't the great step forward that Star Trek fans were looking forward to. 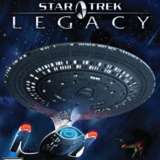