Elite Force II is a good, well-rounded shooter that should satisfy fans of similar games, as well as Star Trek fans looking to shoot first and ask questions later.

If you consider yourself a Star Trek fan, then you probably wouldn't expect the TV series to be very good material for a first-person shooter. After all, more so than other science fiction series, Star Trek has always taken a more cerebral approach as the courageous crews of vessels like the Enterprise and Voyager try to seek diplomatic solutions to conflicts with various alien species, prior to having to resort to their phasers and photon torpedoes. And so 2000's Star Trek: Voyager Elite Force was by all means a pleasant surprise--it was a high-quality first-person shooter that happened to take place in the Star Trek universe. Now, nearly three years later, Elite Force has a sequel, one that fans of the previous game will also enjoy. Like its predecessor, Elite Force II is a good, well-rounded shooter that should satisfy fans of similar games, as well as Star Trek fans looking to shoot first and ask questions later.

The word "Voyager" is conspicuously missing from the title of Star Trek Elite Force II, and that's because most of the game has you stationed not on that ship, but on the Enterprise, with good old Jean-Luc Picard. Some of the Voyager cast reprise their roles in the new game, and ultimately the crossover works well. You play the role of Alex Munro (the male version--in the previous game, you could optionally choose to play as a female version of Munro), leader of the Vulcan security chief Tuvok's hazard team--a heavily armed and armored squad designed for situations too dangerous for a standard away team.

Munro, who looks a bit like John Travolta, is dismayed early on in the game when the hazard team is disbanded after yet another dangerous, but successful, assignment. He is relegated to teaching combat at the Starfleet Academy, where he catches the eye of Captain Picard, who reassembles the team under Tuvok. The game's story unfolds in numerous cinematic cutscenes using the game's 3D engine, and these sequences look reasonably good. Many of the characters closely resemble their television counterparts, and Patrick Stewart and other actors from the series lend their voices for the game's original storyline. Make no mistake, Elite Force II is a pure shooter at heart--but it does have plenty of story sequences and a good enough plot with plenty of twists to it.

The story revolves around the discovery of what appears to be an insectlike alien race, which has ravaged a Federation starship as well as a nearby space colony. Picard sends Munro and his colleagues to check it out. They eventually discover the nature of this threat, as well as who or what is actually behind it. Elite Force II's single-player campaign is of average length for a shooter, but it packs in plenty of variety, keeps you headed in the right direction, and is loaded with scripted sequences and surprises similar to numerous other shooters ranging from Medal of Honor: Allied Assault all the way back to Half-Life.

Elite Force II does pack in some of its own unique twists. It's got some pretty decent boss battles in it, as well as some sequences where you'll need to defend certain characters or lead them to safety. You'll also need to use your tricorder to scan for walls with weak structural integrity (you can blast them open), for hidden energy signatures, and for sources of gas leaks. The tricorder also comes into play in some puzzle-solving sequences where Munro will essentially need to hack certain systems. There are two basic variants of the tricorder puzzles, one that makes you match frequencies and another that makes you connect a circuit by rotating pieces around--this plays a bit like the classic LucasArts puzzle game Pipe Dream. The puzzles do seem a bit contrived, especially in the midst of all the shooting, but they successfully vary the pacing of the missions and sometimes effectively create tension.

Judged solely as a shooter, Elite Force II is good but not without some noticeable and pretty typical problems. The game's AI, for both friends and foes, often leaves much to be desired. You'll fight alongside other members of the hazard team, who will often run straight into your line of fire and get shot in the back, but they won't mind, and they can't actually get killed except at certain key points. The squad-based combat just doesn't look very good, which seems to partly explain why Munro will take every opportunity to split off from his group and get the job done all by himself. Meanwhile, your enemies' evasive maneuvers largely consist of dodging from side to side, which is about the extent of their intelligence. They'll typically come running at you while shooting. Actually, since you'll be fighting bugs more than anything else, and fighting them in some cramped corridors at that, Elite Force II can often seem almost more like a game based on Aliens than on Star Trek, not that that's necessarily a bad thing.

The game also provides a good amount of fan service for Star Trek aficionados. Between combat missions, you'll typically get to wander about the Enterprise and eavesdrop on conversations and such. You'll get to test new weapons in holodeck simulations, and you'll get to choose different dialogue options when speaking to certain key characters. Missions tend to have numerous hidden areas and secrets that you can go out of your way to find if you wish, and by collecting the secret items you can unlock a number of new multiplayer maps. So while Elite Force II's single-player mode isn't particularly long, it does pack in a good amount of content, and it rarely loses steam, except maybe briefly during a later sequence where you're stuck wandering through some bug-infested sewers.

Like its predecessor, Elite Force II features a multiplayer mode that's optionally playable against computer-controlled bots. There are four pretty standard modes of play: deathmatch (holomatch here), team deathmatch, capture the flag, and bomb defusion. The latter is a team-based game in which teams first have to collect a centrally located bomb and then plant it in the opposing team's base. There are numerous modifiers for these modes as well, such as one-shot kills, player handicapping, a few CTF variants, and a class-based option for CTF and bomb diffusion, where players can choose a particular specialty such as sniper or medic.

The weapons in Elite Force II are pretty standard first-person-shooter material, replacing typical assault rifles and rocket launchers with energy-based equivalents. Some weapons are particularly damaging, so multiplayer can often boil down to learning where the key weapon spawn points are and making a beeline for those spots. There aren't many multiplayer maps to choose from, either, but at least it's easy to get into a game either against some competent bots or against human opponents online. Multiplayer Elite Force II probably won't make you give up your first-person shooter of choice, but it does effectively extend the game's value and can make for some entertaining skirmishes. The numerous options at least give this mode a lot of variety, and chances are you'll find a particular type of multiplayer match that particularly suits you.

Just like its predecessor, Elite Force II uses the Quake III engine, which has actually aged gracefully over the past several years. Though the game doesn't look incredible by the high standards of the genre, it looks better than previous Star Trek games, and features convincing environments and effects, crisp textures, and fairly detailed character models. The levels can seem a bit small, as transitional loading sequences will seem to come up fairly often as you blast your way through missions or even as you wander the Enterprise, but Elite Force II's graphics certainly get the job done. Likewise for the sound, as the various weapon effects and the voice acting are in line with what you'd expect from a Star Trek game. During battle, hazard team members and some enemies will repeat the same lines too often, which can be distracting. Elite Force II also uses a dynamic musical score, which sometimes works well and sometimes doesn't quite succeed at keeping tempo with the action. At other times, there will be no music playing at all, and you'll probably miss it when it's not there, though this isn't a big deal.

Elite Force II was developed by a different studio than the one that did the original game, but it stays true to the spirit and style of its predecessor, making it another well-done Star Trek game. Like the first Elite Force, the game packs enough pure action to make it appealing to those who like first-person shooters in general, and it's got plenty of Star Trek science fiction in it for those more interested in the source material. That makes it readily recommendable to those who fall into either category, and especially to those who fall into both. 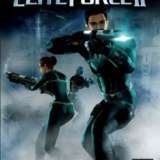