Star Soldier R is the first game on the WiiWare service that qualifies as an adrenaline-soaked addiction. You might assume that a top-down shooter with only two levels would get boring extremely fast--and it is possible to see everything this game has to offer in just five minutes and 10 seconds of playtime--but that supposition doesn't take into account the chronic need to get the highest scores your poor little thumbs can manage. Star Soldier R breaks down the experience into two- and five-minute morsels, making it extremely easy to justify one more attempt to top your own--or your friend's---best score. The variety one would expect in a traditional top-down shooter will be missed by anyone who doesn't identify as a point junkie, but the levels present are so well designed, and the controls so flawlessly smooth, that it's extremely easy to get sucked into a leaderboard score war with someone halfway around the world.

From a gameplay perspective, Star Soldier R is a very traditional entry in a long-established genre. Mow down wave after wave of enemy ships, collect pink balls to upgrade your weapons, and watch your score grow higher. When your ship is fully upgraded, you'll be shooting lasers out of six orifices and controlling an armada of five energy balls eager to serve your every offensive or defensive need. Aside from the expected nonstop assault from your nameless attackers, the ground is littered with objects just asking to be shot. Chaining enemy kills with the destruction of inanimate debris feeds your combo meter, making it possible to achieve insanely high scores. The background elements serve as the key to getting on top of your high-score list. Given that there are so many in each level, you'll have to replay them over and over again to figure out the most efficient path. It's always possible to find one more object to destroy, which means it's always tempting to justify one more round.

There are three modes available in Star Soldier R, but you can pretty much forget about getting any enjoyment from one of them. Quick Shot lasts all of 10 seconds, but that's about nine seconds longer than it should be. The goal is to see how many times you can hit the shoot button per second. It's interesting to measure your dexterity one time, but with no real way to improve your score, it's not something you'll go back to often. The other two modes are the aforementioned two- and five-minute score attacks. They are both instantly addictive, but the five-minute mode spanning both of the game's levels is where the real appeal lies. Only the first level is available in the two-minute run, which is great if you're looking for an extremely short fix, but isn't nearly as satisfying as the longer run. Unfortunately, there is no way to compete in the second level on its own.

If you've already downloaded Super Star Soldier for the Virtual Console, you'll notice a pretty serious upgrade in SSR. The graphics won't entice you to drop your jaw, but the detail has been greatly improved from the TurboGrafx-16 edition, and the explosions are even more satisfying. However, the biggest upgrade is to the controls. Though you could unleash your terrible wrath with aplomb beforehand, flying around the screen is much smoother now. Weaving in and out of enemy fire is extremely easy, and you won't have to think twice about circling an enemy ship to snag that swerving power-up. Trying to play a score-centric game without perfect controls would be an exercise in frustration. With everything tuned to perfection here, you need only blame your lack of skills if you find yourself falling short of the goal.

Although Star Soldier R would have been better served as an alternate mode in a full-fledged top-down shooter, it is still worth the 800 Wii points ($8) even with just two levels. The nimble controls and fixed rules combine to make an experience that is extremely difficult to put down. Whether you're competing only with your friends or trying to be the best SSR player in the world, the game is engrossing almost to a fault. This is a satisfying hardcore title to help launch the WiiWare service. 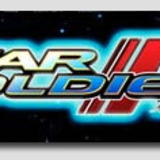