Star Ocean: Till the End of Time Review

The end result is an enjoyable experience, even if the game does not boldly go where no game has gone before.

The Star Ocean series is comfortably nestled in the space-faring future, in a universe of diverse races, unexplored galaxies, warring federations, and other such trappings that wouldn't be out of place in an episode of Star Trek. In Star Ocean: Till the End of Time, you'll follow the adventures of a young man named Fayt Leingod, a human from Earth who has an uncanny knack for falling into all sorts of disaster. Along the way, you'll meet up with some memorable characters, visit alien worlds, and dispatch countless foes with the game's fully 3D, fully real-time battle system. While some design choices mire aspects of this futuristic game in the dungeon-slogging role-playing-game past, the end result is an enjoyable experience, even if the game does not boldly go where no game has gone before.

Everything begins on the idyllic vacation world of Hyda IV, a tourist-laden hotspot filled with sunny beaches and recreational opportunities. The blue-haired college student Fayt is on holiday with his parents and his childhood friend Sophia Esteed, enjoying a break. It all goes swimmingly until the world is attacked by starships manned by the bellicose Vendeeni (a hostile race from Another Sector), intent on ruining everyone's day at the beach. The evacuation doesn't go smoothly; Fayt ultimately ends up separated from his parents and friend, adrift in space until he crash-lands on a primitive planet and is forced to fend for himself. Armed only with a conjured sword to match the local level of weaponry and a Prime Directive-like edict not to interfere with planetary development, he sets out to find his loved ones and a way to escape.

You'll fight entirely in real time, controlling the movements of your characters on a 3D plane. You'll have four standard attacks to begin with: strong and regular attacks at both short and long range. Regular attacks will happen immediately, while strong attacks require a bit of a charge, during which time your character will glow with a purple nimbus. (Enemies will also sport this nimbus, so you have time to move out of the way or hit them first.) As you progress, your party will learn various battle skills that can be mapped to your X and O buttons both at close range and remotely (which attack you pull off depends on your distance from the target), as well as passive skills that do things like let you regain health while standing idle. Such skills often cost you "fury," which is essentially something like vitality that is completely separate from your hit points. When you're standing still, your fury is at 100 percent, and you'll be able to do things like block attacks from nearby enemies. If your fury reaches 0 percent, your character will droop instead of initiating attacks, waiting to gather more strength--fortunately, the fury meter fills quickly when you stop moving.

Battle skills themselves are diverse; some have wide areas of attack, some of them will stun foes, some of them will increase your chances of scoring a critical hit, and so forth. Your characters will learn a wide variety of skills, but they only have a certain number of points they can assign to battle skills, and some skills cost more points than others, so you'll have to do some thinking about which skills you want equipped on each character for the best effect. You'll also have access to symbology, which is just the Star Ocean fancy-pants term for magic. Symbology will allow you to heal members of your party or to attack enemies with powerful elemental spells.

You can control only one of your party members at a time; you can field up to three of them at once. In practice, you'll likely find yourself switching between characters often, to initiate a certain kind of battle skill or to make sure a character will be healed properly. The hectic, fast-paced battles are engaging and satisfying when your characters are well prepared, and the wide variety of monsters and humanoid enemies you'll encounter will require you to adjust your tactics on the fly. There are a few different AI settings you can adopt for members of your party, but none of them are really efficient to the point that you can choose to play one character for any large amount of time. Healing your characters definitely requires quick reactions--when things go badly in Star Ocean, they tend to go very, very badly, very rapidly.

That leads to a balance issue in the game--the battles themselves. All enemies you'll face in Star Ocean: Till the End of Time are visible on the world map or in the dungeon you're currently navigating. It is often a simple matter to circumvent these enemies. Taking things a step further, it is possible for you to traverse an entire dungeon without touching an enemy once, if you're careful. As expected, such activity will often result in your getting severely tenderized by the next boss you come across, but actually, the difficulty of the enemies rises quite steeply fairly quickly. In fact, it rises so quickly that you have to spend quite a lot of time leveling, often by making sure you run into large numbers of monsters, making the fact that you can avoid encounters almost purposeless, since the game is designed around having you fight scores of them on a regular basis.

Avoiding encounters does have one important purpose, however; it facilitates dungeon survival. Star Ocean contains some lengthy dungeons, with many rooms, switches and keys to unlock doors, occasional traps, puzzles, and so on. You have an item limit of 20 for a particular item, which means that when you've run out of healing items, or magic-replenishing items, and you can't keep running into monsters to level up as you wend your way through a given area, there are times you have to drop everything and exit so you can go back to town. And that can mean wending your way back through long hallways, past crowds of monsters, all for another batch of items so that you can go back and do it all over again. This issue improves somewhat as a wider variety of items open up to you later in the game, but insufficient preparation can hit you at any time, and there's often no way of knowing beforehand just how large the dungeon you're entering is.

You'll get that wider variety of items from the game's invention system. While traveling through a certain town, you'll meet representatives from the Craftsman's Guild, which provides space in many different workshop locations for characters to produce items. Each character in the guild, including members of your party and non-player characters, have different levels of skill at different disciplines. For example, Fayt has a knack for writing, while others have talent with cooking or smithing. Once an item is developed, it then becomes available for sale at shops, and you can reap the benefits of better armor, weapons, healing items, accessories, and so on. If you don't have time to ply your own skills, the NPC inventors will still manage to keep a good flow of items coming--along with the occasional "bad" item, like cheap sashimi or spicy cake. You can keep track of the guild's doing through a PDA, which will let you know when a new inventor appears, when a new item is invented, and when new items go on sale.

The North American release of Star Ocean: Till the End of Time is actually the director's cut, which is the second release of the original title. This version has two new playable characters that weren't in the first Japanese release, as well as some additional cinematic sequences and a versus mode, which is unlockable. This version also comes without any of the crashing bugs that were present in the very first presses of the original Japanese title. The game also contains a feature that's something of a Star Ocean staple; depending on Fayt's interactions with various characters during the game, your ending will be slightly different.

Visually, the game's characters are simple and clean in design, evoking the anime style in 3D with their large eyes and bright hairstyles. The models don't have a large range of expression, but they manage to do quite a bit with minor changes to the tilt of their eyebrows and the set of their mouths. Their range of motion looks natural, without too much abuse of the "this character only waves his arms in this one motion and no other" technique. The game's environments are well accoutered for their respective sizes; towns look a bit richer than wide-open fields, and there are a good variety of areas, from deserts, to plains, to old forests, to sewers, to ruins, to icy tunnels. The game's cinematic CG sequences in particular are really good looking, and they usually come in short snatches between scenes rather than as full-length films. Additionally, there's a lot of great theatrical camerawork even during the in-engine cutscenes, with characters positioned like they've been set up for certain shots rather than simply milling about and chatting.

In regard to chatting, several characters' voice work--notably Fayt, the straightforward Cliff, and the enigmatic Nel--is above par, with natural delivery, appropriately inflected emotion, and believable performances that can unfortunately be so rare in gaming. Much of the rest of the speaking roles are also quite solid, barring the occasional Minnie Mouse voice that always seems to crop up at least once in games like this. Star Ocean's musical score is a somewhat eclectic assortment of rock and various orchestral themes that are distinct for different areas and scenes. Sometimes the music is simply unremarkable, but there are also a number of great pieces for certain cities and towns in the game that are very pleasing.

Star Ocean's universe is an appealing one, but it doesn't come without some minor caveats. Those who get the most enjoyment out of Star Ocean: Till the End of Time will be those who enjoy a little of both worlds--a real-time, responsive, progressive type of battle system right alongside deep dungeon crawls, sometimes restrictive item quantities, and lots of character leveling.

View Comments (3)
Back To Top
7.9
Good
About GameSpot Reviews 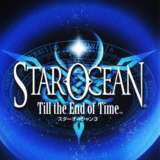 Star Ocean: Till the End of Time
Follow
$44.99 on Target
Buy