The Star Fox fighter squadron returns in this solid flight combat game, which distinguishes itself with its strategic elements and well-designed touch-screen controls.

Yet another popular Nintendo series has successfully landed on the DS. Star Fox Command features both the futuristic space battles and the likable cast of characters that the series is known for, and its 3D visuals look great. The familiar style of the game is freshened up with unique touch-screen controls, new strategic elements, and four-player online play via the Nintendo Wi-Fi Connection service. It's a compelling combination that makes for an enjoyable game, though the single-player mode's flight combat sequences are loosely structured and aren't memorable like those from the classic Star Fox games for the Super Nintendo and the Nintendo 64.

The game takes place in the wake of the Star Fox squadron's successful prevention of the sinister Dr. Andross' plans to take over their solar system. With that threat no longer looming, the Star Fox team disbands...so when a new threat arises in the form of a fishlike alien menace called the Anglar, ace pilot Fox McCloud must decide whether to battle them single-handedly or seek out his old friends for help. On your first play through the story mode, you'll take on a series of missions in a strictly linear order, though you'll notice Fox has various locked dialogue choices in between missions. Once you finish the story--which takes just a few hours and has a rather anticlimactic ending--those other choices will be unlocked. You can then go back through the story several more times, and depending on the choices you make between missions, you'll meet different characters, fight different foes, and eventually reach different endings. For a game about anthropomorphic animals piloting little spaceships, the stories in Star Fox Command come off as surprisingly melodramatic, apparently taking their cues from anime space operas. It's pretty good stuff.

Star Fox Command doesn't just put you into one action-packed sequence after another--every mission is couched in a strategic mode in which your pilot (or pilots) will need to thwart enemies that are attempting to destroy your flagship, the Great Fox. You have a limited number of turns in which you can move your ships, engage in battles, shoot down cruise missiles, and destroy enemy motherships. If you run out of turns in a given mission, you lose. Of course, you can also lose by getting shot down and running out of spare ships, and you even have to pay attention to a time limit during every battle. This sounds like a lot to consider, but every mission area is quite small, so the missions don't take very long. Furthermore, the vast majority of the battles you engage in will be easy, simply requiring you to gun down some number of specific enemies that aren't particularly aggressive. There are a few fairly tough boss opponents strewn throughout the game, but for the most part, the easiest way to lose a mission is by failing to prevent a cruise missile from smacking into the Great Fox.

The missile-chase minigame forces you to move through a series of checkpoints before getting close enough to shoot down the target, and during the moment of truth, things move quickly enough that you might sometimes miss a checkpoint and lose the missile. Then it continues along its merry way, and oftentimes, you won't get a second chance. It can be frustrating to lose a mission this way, but were it not for these sequences, most Star Fox Command missions would be very easy.

You control the action almost exclusively using the touch screen, and while this may sound strange, the system works well and eventually becomes second nature. During the strategic portions of missions, you simply draw your ships' flight path for the next turn, pointing them wherever you want them to go. During battle, you move the stylus around the screen to fly in different directions, and you can make your ship execute a highly useful barrel roll by rubbing the stylus from side to side. While the action unfolds on the top screen, the touch screen doubles as a minimap of the mission area and also lets you drop powerful bombs and execute flips and U-turn maneuvers. Just about the only action you don't use the touch screen for is firing your ship's guns. Any button, or even the D pad, will do that, and most ships can also fire lock-on lasers if you keep an enemy in your sights for a moment. Each of the game's many playable characters has his or her own ship, and all are slightly different. These differences probably could have been a lot more pronounced, but on the flip side, you can rest assured that they all handle smoothly and responsively.

In addition to the story mode, Star Fox Command supports six-player local wireless play using just one copy of the game, as well as four-player online play. Online, you can engage in ranked "battle royale" matches against multiple opponents, or play one to three friends in free battle mode. No matter how you slice it, multiplayer matches play out roughly the same way each time, stripping out the story mode's strategic layer and concentrating solely on ship-to-ship combat. You fly around in an arena, gunning for other players while trying to evade anybody who's on your six. If you blow somebody up, that player instantly respawns in the arena but leaves behind a spinning star that can be collected. The player with the most stars once the time runs out is declared the winner, so there's a bit more to the competition than just gunning down your rivals. This is a fairly simplistic multiplayer mode that can feel pretty chaotic. It doesn't help that players' names can be seen hovering above their ships on an opaque background, which will sometimes obscure the action. The online mode can still be enjoyable, and since Star Fox Command is already available in Japan, expect experienced competition from day one.

The presentation in Star Fox Command is one of the highlights. The impressive 3D visuals do a lot to make the game more appealing. The ship designs look great, the game runs smoothly, and there are a number of different, good-looking environments to fly around in. There's no speech, but all the characters speak in a gibberish language you might associate with this series (it also sounds a lot like Animal Crossing's "animalese"). One slightly creepy option is to put your own voice in the game by saying a series of words and phrases into the DS microphone, which causes Fox's tone of voice to sound like yours. A fitting soundtrack and good sound effects round out the audio, though the incessant high-pitched chatter of ROB the robot during both story battles and multiplayer battles can be grating. But this is still a technically impressive DS game that's colorful and fun to watch.

Star Fox Command has great controls and introduces a strategic layer that's fairly interesting. However, the random feel of the story battles and the frantic multiplayer mode don't make the most of this game's solid foundation, which might cause nostalgic fans to long for the series' good old days. Fortunately, Star Fox Command still has a lot of good qualities going for it, so anyone looking for an original, portable flight combat game should set their sights on this one. 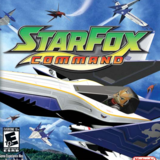