It's the same adventure you may have experienced many times before, but Star Fox 64 3D is still an enjoyable journey through a dangerous galaxy.

In the 14 years since Star Fox 64 first landed on shelves, millions have answered the desperate call to save the Lylat system from the forces of the vile Andross. Few who have heeded that call have forgotten the brave wingmen who flew alongside them, or the perilous places they passed through on their mission. Now, the call rings out once again. Star Fox 64 is and has always been a well-crafted adventure, and whether you're a seasoned space ace or a novice pilot, you're sure to enjoy rescuing Corneria from Andross' clutches. Underneath the new 3D paint job, this is mostly the same game that has been released not only for the N64, but also on the Wii's Virtual Console, and it's hard not to wish that Nintendo had created a new mission to undertake rather than hauling out this classic again. But although Fox's Arwing has been around the galaxy a few times, she's still got it where it counts.

The diabolical scientist Andross was exiled long ago to the distant world of Venom, and from there, he now mounts an invasion against the peaceful planet Corneria. His forces overwhelmed, the canine General Pepper calls on the services of the Star Fox team, a mercenary band of fighter pilots, to fend off the invasion and take the fight to Andross' harsh homeworld. But team leader Fox McCloud and his fellow fighters aren't in it just for the money. Fox's father, James, led a mission to Venom some years ago from which he never returned, and which team member Peppy Hare narrowly survived. The characters have plenty of personality--particularly Falco, whose arrogance is as sharp as his beak. The frequent chatter between team members Fox, Peppy, Slippy, and Falco creates a sense of camaraderie, though some lines repeat too often. Peppy loves to inform you that "Your father helped me like that, too" when you blast a bogey off his tail, which you might find yourself doing frequently.

Your mission to defeat Andross begins on the lush planet of Corneria. Propelled forward along a narrow path, you shoot enemies both airborne and on land, and do some fancy flying with your Arwing spacecraft to evade enemy fire and snag power-ups. Control is easy and intuitive; holding the left or right shoulder button while turning lets you bank in that direction more quickly, and a double-tap of either shoulder button performs the famous barrel roll, which deflects enemy fire in addition to looking pretty cool. As a result, you feel like a skilled pilot from the moment you start playing, but true mastery of Star Fox 64 takes time.

Each stage plays out the same way each time, with enemies entering from the same directions at the same moments. Familiarizing yourself with these patterns is vital if you want to earn the medal for each stage, which requires you to score a certain number of hits against enemies. Earning these medals isn't easy, and they serve as a good incentive to revisit the stages repeatedly and hone your skills. If you earn all of them, you earn the right to feel like a hotshot, and you unlock the game's expert difficulty level, which has a whole new set of medals to earn. But you don't have to be concerned with acing the mission to have a good experience with Star Fox 64. You can also have fun just fumbling your way through the adventure. It's easy enough to be accessible to just about anyone, but those who want a significant challenge will find that, as well. And this version includes two difficulty levels that are available from the start: one duplicates the difficulty of the N64 version, while the other makes your ship sturdier and your enemies easier.

Your journey to Venom to overthrow Andross is not a long one; playing through the game from start to finish takes well under an hour. But this is a game you'll want to play through many times. There are 15 stages in all--16, if you count the two different versions of the final stage--but you pass through only seven of them on any given mission. Each stage is distinctly different from all the others. The massive asteroids of Meteo dwarf your tiny Arwing, while the rippling surface of Solar exudes a palpable sense of heat. There's a good deal to discover in these diverse stages, like the routes that let you progress to more difficult worlds, and tricks for dealing with certain bosses. And although the stages don't hold any surprises after you've played through them a few times, their varied dangers and exciting objectives help them stand up to multiple plays. You may need to swerve to avoid a massive obstacle one moment, blast a squadron of enemy ships the next, and boost ahead to come to the aid of your wingtoad the next. You may need to hop in a tank and take out a train on the surface of Macbeth, or take to a submarine and investigate the depths of Aquas. Even when you know what's coming, the constantly shifting action keeps things fun.

Although you're usually speeding ahead along a set path, in some spots you can move freely within an enclosed area. For instance, in a few missions, you're attacked by the cold characters who compose the Star Wolf team, and the action shifts to let you fly around at will as you dogfight these villains. This freedom is a pleasant change from the more limited action that makes up most of the game, but it has limits of its own, and these limits can be frustrating, since they don't impede your enemies. The Star Wolf pilots have a tendency to fly up when you're hot on their tails, and a low ceiling prevents you from pursuing them. The bad guys don't stay out of range for long, but this artificial hindrance still saps these dogfights of some excitement.

Star Fox 64 3D doesn't alter the style of the game's visuals; there's still an inviting geometric simplicity to these environments that makes this universe a believable home for the cartoonish anthropomorphic animals who inhabit it. But this version employs a richer color palette than the original, and the sharpness of the visuals puts the comparatively fuzzy N64 version to shame. 3D is a welcome addition here, as star fields in the distance create a convincing sense of being in deep space. So even if you know the floating rubble of Sector X like the back of your hand, the updated look breathes some new life into this adventure.

If you'd rather blast your buddies than talking pigs, apes, and wolves, Star Fox 64 3D's local multiplayer mode lets you dogfight with up to three friends. The four environments, which include the volcanic surface of Venom and the heart of Corneria City, provide plenty of obstacles for fancy flyers to weave through in an attempt to shake off pursuers, and the tight controls allow for some exciting aerial battles. You also have the option of turning on the 3DS camera and trying to throw your competitors off their game by making funny faces. It's unfortunate that there's no online support to let you blast faraway friends out of the sky, but on the plus side, the multiplayer is via download play, so you need only one copy of the game to enjoy it.

It's still a pleasure to discover (or rediscover) the varied regions of the Lylat system with this colorful cast of characters. For some, this adventure may feel a little too familiar, and it won't hold any surprises for those who have overthrown Andross in the past. And the addition of a "gyro controls" option that lets you steer the ship by tilting the 3DS adds little to the experience; it fails to offer the responsiveness of the traditional controls, and its presence is nothing more than a curiosity. Even considering the visual overhaul, $40 is too high a price for this 14-year-old game that you can buy for ten bucks on the Wii's Virtual Console. But Star Fox 64 stands the test of time, and whether you're new to this space-faring adventure or just eager to take that old Arwing for another spin, you won't be disappointed.

View Comments (6)
Back To Top
7.5
Good
About GameSpot Reviews 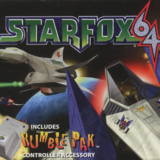