Star Fighter has plenty of problems - the biggest being the way it looks and flies.

Even though I've always been a real champion of PC games, loquaciously proclaiming their superiority over games designed for console systems, I've always been ready to admit that some types of games are just better on consoles. Fighting games? Consoles rule. Platform games? It's getting closer, but consoles still have the edge. But when it comes to flying, nothing matches a PC - and if you want proof, just load up Star Fighter, a PC translation of a game obviously designed for the 3DO system.

The storyline in Star Fighter is hackneyed, but that's not a unique gripe when it comes to flyin'-and-shootin' games: As a pilot for the "Federation" (God, don't you just love the Federation!), you fly from planet to planet and basically shoot everything in sight. Just about any object - be it animal, vegetable, or mineral - yields up "energy crystals" when destroyed, and you earn various power-ups by grabbing certain colored crystals; there are also parachute drops you can snatch that upgrade your ship in various ways. (Unfortunately, reaching a parachute before it hits the ground is a dubious proposition at best, thanks to one of the most user-unfriendly navigational maps ever created for a simple arcade-style game.) It seems kind of anachronistic to have to grab parachutes in mid-air to replenish a spaceship that can fly in the atmosphere or outer space, but that's the least of Star Fighter's problems.

And believe me, Star Fighter has plenty of problems - the biggest being the way it looks and flies. The graphics are big and blocky, especially when you get close to an object; swoop near the ground or water and you can see the terrain warp and bend in ways that might earn accolades in an art film, but only shatter your sense of disbelief in a computer game. With no throttle per se - you either fly at minimum speed, top speed, or coast in between - trying to line up a target can be maddening. Guided missiles, whether air-to-air or air-to-ground, can only be locked on to a target by pointing the ship directly at them - now there's something you'd expect from technology in the distant future, eh? And even though I tried three different controllers - CH F-16 Combat Stick, Microsoft Sidewinder 3-D Pro, and Gravis Gamepad - the ship still handled like a winged cow.

Because there's no HUD to speak of, you're forced to switch constantly between the cockpit view, a strategic map, and a ship status screen, slowing gameplay to a crawl. And even if you don't switch to the map, the pace of the game still feels slow. If you've just come off the adrenaline rush of a game of Magic Carpet II, Fury3, or Hellbender, you'll feel like you've entered the Geritol Zone when you climb in the cockpit of Star Fighter. This game just isn't fast enough to satisfy a real (or aspiring) action-hound, and I'm not talking about frame rate, either (though that drops into single digits even on a high-end machine whenever there's an explosion of multicolored polygons signifying the destruction of a target).

Thankfully, we now live in an age where you can try out a game to see if the writer who panned it was right or not - or, more appropriately, to see whether or not you agree with his or her tastes. Go ahead, try the demo for Star Fighter - but once you've banished it from your system, don't blame me for the time you spent downloading it, or for the hard drive space that was fragmented during its short and unwelcome stay. 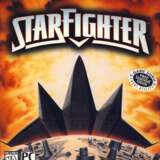