It's got some quirks, but S.T.A.L.K.E.R. delivers a dynamic and impressive first-person gameplay experience you won't soon forget.

S.T.A.L.K.E.R.: Shadow of Chernobyl has always been an overly ambitious game, which is probably why it has arrived several years later than originally expected. The game's goal is to create a virtual world with an ecology all its own and then place you in the middle of it. That's something that's rarely been attempted, particularly in a first-person game. However, to the credit of THQ and Ukrainian developer GSC Game World, S.T.A.L.K.E.R. is an impressive accomplishment. This first-person survival game is at times amazing and engrossing and on par with such classics as Deus Ex and System Shock.

This is another first-person game that features a silent and mysterious protagonist, much like Half-Life's Gordon Freeman. You play as the Marked One, a heavily armed scavenger suffering from amnesia and stuck inside the exclusion zone surrounding the nuclear power plant at Chernobyl, Ukraine. Yes, the same nuclear plant that exploded in 1986 and, in S.T.A.L.K.E.R.'s fiction, again in 1989, creating a radioactive hotspot brimming with mutants, heavily armed rival factions, and all sorts of weird, paranormal activity. Your task: Figure out who you are and what's going on at the core of the zone.

At its heart, S.T.A.L.K.E.R. is a first-person survival game that blends action with role-playing. This isn't a linear game, like Half-Life or Call of Duty, where you basically are restricted to a straight path and are taken for a tightly controlled and scripted ride. S.T.A.L.K.E.R.'s huge environments and open-ended gameplay make it more like a role-playing game, as you can go where you want and do what you want if you're willing to live with the consequences. However, you don't have to worry about traditional role-playing attributes such as strength or intelligence, or accumulating skills and abilities. Instead, all you have to worry about is your skill with a rifle and scavenging enough weapons, ammunition, and med kits from fallen enemies to keep going.

Slowly but steadily, S.T.A.L.K.E.R. introduces you to the bizarre world of the zone, a place where the fabric of reality is being ripped apart. Strange energy anomalies are everywhere, and wander into one at your own hazard. These anomalies produce rare and valuable artifacts that can be collected and traded, or even equipped, as they can confer special abilities. Perhaps the most useful ones enhance your endurance, letting you run for far longer than normal, which is a particularly valuable ability to have when traversing the huge area of the zone. And, of course, danger lurks everywhere in the form of enemies that are both human and not-quite human, as well as from animals.

To battle them, you'll have a large arsenal of weapons to eventually choose from, mainly in the form of assault rifles, shotguns, and pistols. S.T.A.L.K.E.R. features one of the best ballistics models ever seen in a game, and as a result, firefights feel authentic as you try and hit someone with what can be a wildly inaccurate rifle. The name of the game is using cover effectively and firing short, accurate bursts, particularly at the targets' heads. After a battle, you can loot the dead for weapons and ammunition, and one of the nice touches in the game is that you can't run around with an arsenal of 9 or 10 different weapons. Instead, the inventory system restricts what you can carry mainly by weight, and most weapons use a different type of ammo, which means that you've got to be judicious in selecting what you take with you. There's simply no way you can haul around three or four different weapons, their ammunition, and everything else that you need to survive in the zone. This includes health packs, bandages, radiation medication (vodka will also do in a pinch), and even food. You've got to eat regularly in S.T.A.L.K.E.R., and if you go too long without food, hunger warning signs appear.

The game's artificial intelligence is impressive, both in and out of combat. In combat, enemies are cunning when given enough room to move around. Human enemies hunt you intelligently, using cover and the terrain to their advantage. Meanwhile, creatures such as packs of mutant dogs behave like you'd expect wild animals to. They attack when they feel they have the advantage but flee if given a painful lesson. It's this kind of behavior that makes the zone feel alive, with these different factions and animals all trying to go about their daily tasks. The AI does take a hit when placed in tight interiors, though, as the lack of maneuvering options makes it turn a bit predictable, but you'll likely appreciate this fact early in the game, as hiding inside a building and picking off the grunts as they come through the doorway is the only way that you'll survive some of the early battles.

There are all sorts of human characters in the game, from lone stalkers out on their own to various factions that you can ally with or battle. Then there are the mutants, from the strange animals that inhabit the zone to the more deadly kind of mutated humanoid, such as the little guy who can mess with your mind to the creepy crawling dudes who lunge at you from out of nowhere. Toss in S.T.A.L.K.E.R.'s version of zombies and poltergeists, and you've got a more-than-interesting array of potential friends and foes. There are some large-scale battles that will find you fighting alongside teammates, and afterward you'll watch as AI friendlies saunter up to the wounded writhing on the ground, say something nasty in Russian or Ukrainian, and then shoot them in the head.

S.T.A.L.K.E.R.'s main storyline will take maybe 10 hours to get through if you just pursue it, but there are also plenty of side quests that can consume hours, as well as sheer hours spent on exploration. The side quests are very optional, though, as they usually end with a cash reward, and cash is the one thing that you'll not face a shortage of. There's just nothing worth buying from the vendors in the zone that you already can't get for free with a little exploration.

Much of S.T.A.L.K.E.R.'s story is a bit hard to figure out, thanks to the fact that it's delivered mainly through short journal entries, cryptic cinematic cutscenes, and hard-to-understand Ukrainian and Russian accents. There are also multiple endings, with some that end in failure depending on the choices that you make in the game, so there's plenty of replayability here. However, the quest system itself is a bit broken, as some side quests can't be resolved or they reset after you've accomplished them. We also encountered issues while running the game under Windows Vista, from quick loads not working to the game becoming unstable and crashing. THQ and GSC Game World are working to deliver a patch for some of these issues, but it's a pity that the game shipped with them. Considering that S.T.A.L.K.E.R. was already years overdue, another month or two in testing seems rather paltry, especially to provide support for Windows Vista.

As innovative and revolutionary as S.T.A.L.K.E.R.'s single-player game is, its multiplayer component is surprisingly old fashioned and standard. Multiplayer features the traditional modes, such as deathmatch, team deathmatch, and artifact hunt (basically capture the flag), and the goal is to run around and get as many kills as possible. The action is fast, brutal, and short, and while the multiplayer features the same impressive ballistics modeling of the single-player game, it still feels way too easy to get picked off over and over again by a distant sniper. Multiplayer does have an economy of sorts, as you gain cash for your kills, which you can use when you respawn to purchase different weapons, ammunition, and equipment, but for the most part, there's nothing particularly new here.

Though already dated by a few years, S.T.A.L.K.E.R. still looks good, and its visuals are on par with Half-Life 2. What the game lacks in modern-day graphical pizzazz, it makes up for with intricate detail and immersive atmosphere. There's something to be said for the game's environments, which are infused with a ton of character and detail. It feels like the postapocalyptic landscape it's supposed to be. The countryside of the zone feels rugged and wild, with abandoned towns and compounds littering the landscape. Each locale has its own particular feel to it, so you never feel like the world was made with cookie-cutter building templates. The sense of exploration is marvelous, and it's the little details that make the difference. While you won't need a high-end system to play the game, the sheer size and scope of the world are such that it really helps the frame rate if you do.

The lighting and particle effects are particularly well done. For instance, battles can occur in raging storms, with flashes of lightning briefly illuminating the battlefield. The game's flashlight system also deserves a heaping of praise. The flashlight in S.T.A.L.K.E.R. cuts through the darkness with a realism that's beautiful to behold. It's your most important friend in the dark, but at the same time, it also betrays you, since enemies can see the light from your beam long before you can actually see them. And the flashlight doesn't suffer from the 30-second-battery-life contrivance found in most shooters. How refreshing.

The audio in S.T.A.L.K.E.R. also does an excellent job of immersing you in this world. When you're outside in the zone, the rustling of the wind in the grass, the cry of animals in the distance, and the ominous tick of your Geiger counter are ever present. When you're inside, there's nothing like the howl of a nearby mutant to raise your hackles. Weapon and mechanical sounds are also spot-on, and the crack of assault rifles in the distance lets you know that trouble's ahead. The voice acting is a bit hard to understand, but since the game is set in the Ukraine, that's to be expected. Even the game's broken English (both spoken and written) is a bit charming in this regard.

In spite of its small quirks and bugs, S.T.A.L.K.E.R. is definitely a game that deserves to be played. For first-person shooter fans looking for the next big thing in the genre, it's difficult not to be impressed by the game's unique and evolving world. Meanwhile, fans of role-playing games will appreciate the open-ended nature of the gameplay and being able to explore different paths through the zone. This is a bleak game, but in a good way, as it captures its postapocalyptic setting perfectly. It's also an excellent combination of combat, horror, and exploration.

View Comments (12)
Back To Top
8.5
Great
About GameSpot Reviews 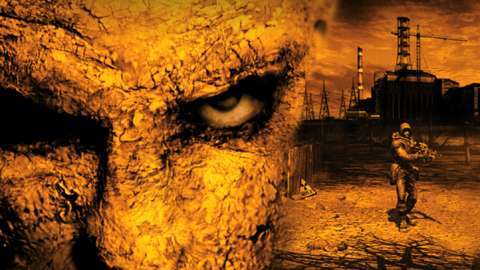