The subversive style of SSX On Tour is unlike anything the series has seen before, and it's pretty unique in the overall world of video games.

Though it has often found itself lumped in with Tony Hawk and the rest of his action-sports cronies, the SSX series has always been more of a racer, albeit a racer with an affinity for ridiculous airborne stunts. Last seen in 2003 with SSX 3, the series returns with the aesthetically revamped SSX On Tour. This is an incredibly slick package, and not just on the surface, either. On Tour tightens up a lot of the underlying course designs and gameplay mechanics, and it quickens the pace without betraying the fundamentals of SSX.

We can't talk about SSX On Tour without first talking about its unique art style, which permeates all of the menus and consistently creeps into the actual gameplay as well. While SSX 3 went for sleek and icy, On Tour's visual style has a real sweaty, wild-haired enthusiasm to it. The game specifically aims to mimic the hand-drawn notebook doodles of a bored, hyperactive heavy-metal high schooler. There's a purposefully crude, monochromatic look to everything, but all of the menus are crammed with details and weird, whimsical animations, adding a real oddball energy to the environment. Pensive-looking donkeys, twin guitar-wielding unicorns, and squat little monster-men with tongues of unsettling length are all common sights throughout the menus. This is not necessarily an original art style (you can look to the finale of Richard Linklater's School of Rock to catch some direct inspirado, and there are occasional Ed "Big Daddy" Roth touches), but it's delivered with a liveliness that is downright infectious.

The actual polygonal world of SSX On Tour isn't quite as daring as it was in SSX 3, and more of the technical muscle goes into the lighting engine in this game. The characters somehow seem less detailed than they did in SSX 3, but their animations are still silky smooth, and it can be fascinating just to watch your skier shift its weight from one foot to the other as it navigates some uneven terrain. The environments are absolutely jam-packed with alternate routes, shortcuts, and secret paths, but they all manage to come together quite naturally, and the actual geometry looks great, too. Topping it all off are some great particle effects (the falling snow and fireworks look amazing), and at least in the PlayStation 2 and Xbox versions, a rock-solid frame rate. The visuals have always been a strength of SSX, and On Tour is able to pull it together on both the artistic and technical fronts with great confidence.

The single-player experience in SSX On Tour revolves around the tour mode, where you create a custom rider, choose whether it's a skier or a snowboarder, and then compete in a lengthy series of class-based challenges. A good number of characters from past SSX games appear in On Tour, and you'll compete against them repeatedly. However, the focus on characters has been toned down significantly since they were all given celebrity voices in SSX Tricky. Now the big idea is to put the spotlight on you as you turn your lowly novice into a full-fledged snow-sportin' rock star. The three main SSX event types--race, trick, and slope-style events (a 50/50 race/trick blend)--are still staples in On Tour, though now there are more-specific challenges for you to face. Some of them start off being pretty mundane (like having to collect a number of special icons before time runs out), but they quickly become more inventive and challenge some very specific skills. You'll have to score a number of points on a limited number of jumps, grind a length of rail before you get to the bottom of the hill, or pull off a number of hand-plants before time runs out--and these are just for starters. One of our favorite recurring challenges is where you have to make it through a course while touching the snow as little as possible. Every time you touch the snow, a countdown clock starts ticking, and if it reaches zero before you reach the finish line, you're disqualified. Events like this add some amazing variety to the action in SSX On Tour.

The big sell in SSX 3 was the streaming technology used to create that game's seamless, one-mountain feel and to lay out courses that could last for nearly a full hour. SSX On Tour still takes place on a single mountain, and there are still plenty of lengthy courses, though the navigation is done entirely through a rather authentic-looking snow resort trail map. There are no big leaps in technology in On Tour, but there are plenty of under-the-hood adjustments and additions. Superficially, the biggest addition to SSX On Tour's gameplay is the ability to put your rider on skis as well as snowboards. This opens up a whole new set of aerial maneuvers, but its impact on the actual controls is pretty nominal. More significant is the way that SSX On Tour handles massive aerial stunts. "Ubertricks" have turned into "monster tricks," and instead of holding a shoulder button and a face button in tandem to pull off these natural-law-defying maneuvers, you simply hold the right analog stick in a specific direction. You still need to fill up your boost meter by pulling off lesser tricks, such as aerial grabs, rail grinds, and hand-plants in order to access these aforementioned maneuvers. Some might frown on how much easier it is to pull off these monster tricks. Frankly, the trick system has always been mostly for show in SSX, and making it easier to pull off big tricks just makes for a more exciting show.

SSX 3 reveled in its wide-open, uncharted levels, which led to a really cohesive gameworld, but also made for some tedious stretches of track. SSX On Tour is a much meaner machine, dealing out tracks with much more focused, tenacious designs. One of the side effects is the preponderance of lengthy rail-grinding lines for you to pursue, which lead to some of the game's most outrageous moments, such as when you slide your way through a loop, or grind on a helicopter's landing skids while it's in the air.

You'll also notice that SSX On Tour no longer takes place on a closed course, and you can expect to (literally) run into other random skiers, snowboarders, and general winter sports enthusiasts on the mountain. In a rather obvious homage to Criterion's Burnout series, you can get a little bump on your boost meter when you have a close call or you run into a random person, though a direct collision will slow you down significantly. Actually, there are a lot of similarities between SSX and Burnout, not the least of which is a really amazing sense of speed. SSX On Tour definitely moves faster than any of its predecessors, and its sensation of speed is complemented by some great motion blur effects and a sound design that adjusts dynamically to the in-game action.

At slower speeds, you'll hear everything on the mountain--the sound that your board or skis make changes as you cut across ice and snow of different densities, the chatter of other people on the mountain, and the distant sounds of wildlife--but once you start burning up your boost meter, everything kind of tunes out, save for the whistle of the wind rushing past you. Sometimes the sound seems to drop out at moments when you're not really doing anything too death defying, but it's really effective more often than not. The game also features a great soundtrack of licensed music, with a distinct jean-jacketed, horn-throwing bent to it. The blend of indie rock, punk, hip-hop, and dance music is pretty predictable, though the pedigree is better than average, with critical favorites like Bloc Party, Diplo, Queens of the Stone Age, and LCD Soundsystem all contributing tracks. What really stands out, though, are the classic heavy-metal tracks by Def Leppard, Motorhead, Scorpions, Iron Maiden, and the godfather of heavy metal himself, Dio. You might not necessarily expect this throwback metal to work in the context of a snowboarding game, but it's a perfect fit for On Tour's crazy visual aesthetics.

SSX 3 for the PlayStation 2 featured an online multiplayer component that was, well, kind of half-assed. Rather than attempt to make a more fully-realized and entertaining online mode, On Tour ditches the mode entirely, which is sort of disappointing. The game still features a split-screen, two-player mode, though. It's technically proficient, though the level of detail gets bumped down and we noticed occasional frame rate hitches. Multiplayer has never been one of the big draws in SSX, though that doesn't lessen our hopes that EA will get it right one day.

With the online multiplayer out of the picture, the differences between the PlayStation 2, Xbox, and GameCube versions of SSX On Tour are few. Much like NBA Street 3 for the GameCube, SSX On Tour features Mario, Luigi, and Peach as playable characters in the quick play mode (kind of a throwaway feature, but one that we had a hard time not reveling in anyway). The GameCube version is also unfortunately saddled with a less-stable frame rate and a few other graphical rough edges. There aren't any detectable technical differences between the PS2 and Xbox versions, but using the four shoulder buttons on the Dual Shock 2 is much easier than using the triggers plus the black and white buttons on the s-controller, making PlayStation 2 our preferred platform for SSX On Tour.

But no matter which platform you go with, you're going to end up with a really fun game. The subversive style of SSX On Tour is unlike anything the series has seen before, and it's pretty unique in the overall world of video games. The game expertly balances the fresh and the familiar and creates an engrossing experience that will have fans falling for SSX all over again, while undoubtedly bringing plenty of newcomers into the fold. 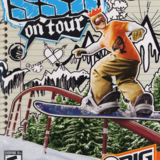 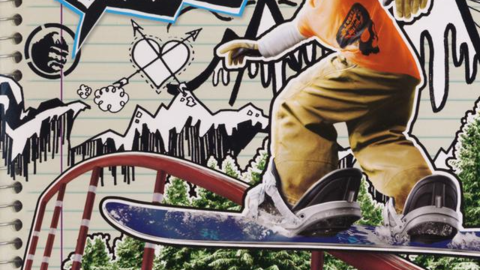 You can ski or snowboard yourself into stardom in SSX On Tour. The game includes 12 levels for racing and performing stunts.