SSX Blur has its moments, both joyful and frustrating, but it winds up being a solid entry in the SSX series.

When the original SSX launched for the PlayStation 2 back in 2000, it included an in-your-face logo screen of EA Sports Big that was complete with a big, booming voice pronouncing the name of the publisher in no uncertain terms. Seven years later, the SSX series has debuted on the Nintendo Wii with SSX Blur, but both the logo and the voice talent have mellowed--less Danzig and more Dan from accounting. To a certain extent, the same is true for the game itself. While SSX Blur has moments of frustration that will have you raising your own voice, it remains another solid--if a bit more mellow--entry in the SSX series.

Certain ingredients in the SSX formula never change. Your goals in Blur remain the same: tackle a number of challenging snowy peaks in a variety of events and tournaments that run the gamut from straight downhill blasts to the finish line to trick events that have you pulling off increasingly more complex tricks. You must do all this while taking on a colorful cast of characters, many of whom have returned from previous entries in the SSX series.

While you won't feel out of sorts in the SSX events, the controls are a different matter entirely. As you might expect from any game on the Wii, SSX Blur controls very differently from the other games in the series, as well as any snowboarding game you've ever played. The good news is that for the most part the controls work beautifully. You use both the Wii Remote and the Nunchuk accessory to control your character; the Nunchuk does the lion's share of controlling your character when his or her board is touching the ground, and the Wii Remote controls your character when he or she is in midair. When the controls work well, such as steering your character by using a combination of the Nunchuk analog stick and titling the controller left or right, it feels really good, adding an entirely new dimension and feel to zipping down the mountains. The sensitive controls are buoyed by fine character animations that show off each bump and undulation on the peaks, giving you a real sense of being on the mountain.

Unfortunately, the trick controls don't always keep up, although the basics are there. For example, to execute a jump, you simply move the Nunchuk controller up quickly or press the A button on the Wii Remote. Once in the air, you move the Wii Remote in any direction, and your character will respond with a variety of flips and spins that at first feels like a revelation. But after a while, it begins to feel more than a bit random. Sooner or later, you stop caring about the exact trick you're pulling off and begin moving the remote around in a random fashion, watching your character pull off increasingly bizarre strings of moves that often seem disconnected from the controller.

The ubertricks are the worst offenders. To gain access to ubertricks, you have to fill up your "groove" meter by pulling off tricks. Once you've gained enough groove, you can attempt an ubertrick by holding down the A button and tracing a pattern with your Wii Remote. Small pattern icons pop up onscreen, indicating various ubertrick patterns in your arsenal (and you can earn more ubertricks as you progress through the game). While you can get away without mastering ubertricks early in the game, you won't get very far in the late tournaments without mastering at least a couple because they provide huge point bonuses over your standard tricks. Here's the problem though: They don't always work. We were able to get only the most basic of ubertricks to work on a regular basis and, even then, not so much. It's almost as if the developers understand how tough the ubertricks are because the game provides you with an ubertrick tutorial and a feature that let's you practice patterns over and over (and over) in an ubertrick menu screen until you get it right. Whether it's a matter of the Wii Remote not being sensitive enough, the trick patterns being too complex, or some combination, ubertrick controls in SSX Blur feel like a failed experiment.

If you can manage to keep your Wii Remote strapped to your wrist (as opposed to smashed against the wall in frustration), you'll find the rest of Blur an enjoyable ride. For one thing, the learning curve in the game is excellent (ubertricks notwithstanding). Early in the game, the races are easy, and the demands on your trick ability are minimal. However, it won't be long before you're regularly tackling halfpipes for 800,000 points or more at a pop. One notable exception is the slalom events, which seem abnormally difficult from the get-go and only get worse as the tournaments continue.

As has always been the case in SSX, Blur has tons of unlockables to explore, including new characters, new outfits, new tricks to learn, and new skis or snowboards to pick up. The game is also well organized. You can simply drift about on the snow, picking up challenges as you make your way down the slopes, or you can make your way to specific areas of the three peaks in the game, which will then automatically enter you into that competition. Finally, if you want instant access to the different events, you can access all of the slope events and tournaments from a menu. The game has a few too many loading screens, but getting from one event to the next is not too bad.

SSX Blur's game modes are straightforward. The single-player game features a tutorial to get you used to the controls, a quick-play option to get on the mountain quickly, and a career mode where you take control of any unlocked rider to compete in events and tournaments. Competing in these events helps to improve your character's attributes. Multiplayer consists of either split-screen competition in race or trick events, or hotseat events where players take turns in events and compare high scores.

While elements of Blur will feel familiar, namely the recycled tracks, the game's art style feels fresh. The character designs are more cartoonlike than before, which suits the Wii's aesthetic just fine. The characters are animated beautifully, and little touches, such as a character being covered with snow head to toe after a wipeout, are fun to see. Despite an overall fine sense of speed to the downhill action, there are occasional frame-rate hitches that can drag things down. In addition, it's not uncommon to get your character temporarily stuck in a corner (say, between the edge of a cliff and a rail). If you exit the playable area, the game also has a tendency to warp you to strange spots. For example, during one slalom race we entered, we went over the side of a cliff, only to be respawned far away from any of the remaining slalom flags. Worse yet, we weren't penalized for missing those flags.

Another consistent feature in the SSX series has been high-quality sound design, and that's still the case with SSX Blur. The sound of the board meeting the snow is excellent, varying between the soft swish of powder and the crackling skid of sheets of ice. The music, upbeat and slightly funky as always, is also excellent in Blur. It morphs and twists with the various successes and failures of your jaunt downhill.

It's too bad that SSX Blur's controls are so uneven, because if not for the maddeningly inconsistent ubertricks, Blur would be a sure thing. Unfortunately, there's nearly as much frustration to be derived from this inconsistency as there is pleasure from the other quality features in the game. This doesn't mean you shouldn't go out and pick up the game if you're a longtime SSX fan or a Wii owner looking to get your snow sports on; it just means that you should know what you're getting into beforehand. 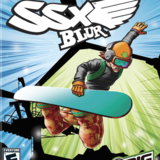 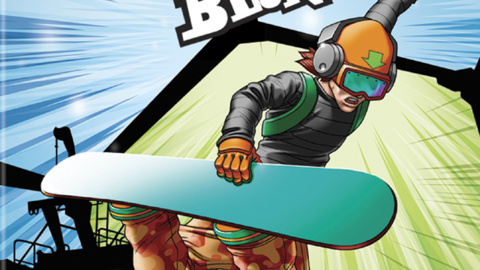 SSX Blur has its moments, both joyful and frustrating, but it winds up being a solid entry in the SSX series.