You've got a friend in me.

Some people have things in their home that make it a more desirable location for parties. Rachel has a billiards table. Don has table tennis. But Johann? Johann has Sportsfriends, a collection of four simple, enjoyable games that are easy to pick up and play. Provided you have a good group of people and a few controllers to go around, it can be exactly what a party needs to go from good to great.

I stress the party theme, because having people to play Sportsfriends with is a requirement. There are no single-player options whatsoever (not even any sort of practice mode), and there is no online play. To get anything at all from Sportsfriends, you need at least two people (preferably more). Fortunately, even if you have four people but are lacking a couple of controllers, half of the games in the collection allow you to share a controller between two players. Things may get a little cramped (I hope you're comfortable being close to the person you're sharing with), but this is a valid and enjoyable way to experience these two games, and it's a great option to have.

The first game on the Sportsfriends list, BaraBariBall, is the most complex and hardest to master, but it's potentially the most rewarding for those who want something with depth to seek their teeth into. The game pits two teams (of either one or two players each) on opposite sides of a stage and drops a ball into the middle. Each team then fights over the ball (often literally, as physical attacks are encouraged) in an effort to get the ball into their team's goal--a goal made of water below the stage. You can jump into the water to grab the ball before it sinks offscreen, but it's a risky move. If you sink too far yourself, your team loses a point.

Getting around each stage and past the opposing team requires some jumping, but you have a limited number of jumps you can use in a row before you have to land on solid ground to recharge. Because the liquid goal lines are typically a fair distance below ground level, managing how many jumps you have at any given time is vital to success in both offense and defense. At times, BaraBariBall has the same frantic nature of a fighting game, including the physical violence that comes with that. Desperation can set in when the ball is sinking into the goal and an opponent is about to score. You know you have enough time to dive into the water and grab it--but will you have enough jumps to make it back out alive, especially considering your competitors will be waiting for you back on land? Decisions must be made quickly, and the difference could be a well-timed punch to the face.

A handful of character and special move options allow for different individual strategies, and you need to adjust your tactics depending on whether you're playing with two people or four. If you don't like the default rule set, you can tweak everything from point values to the number of jumps you can use before recharging. This all combines to make BaraBariBall the deepest game in the Sportsfriends collection, but it's still simple enough to not be too intimidating.

By comparison, Super Pole Riders is much easier to pick up. This game combines the easy-to-understand act of pole vaulting with an objective very similar to that in BaraBariBall--namely, a ball in the center of the arena that you want to get to your goal. This ball, though, is hanging on a rope high above you, forcing you to either vault yourself up to the ball to kick it or use your pole (which, despite being able to support your weight, seems to have the firmness of a foam pool noodle) to shove it into the goal.

The controls for either strategy are simple: the left analog stick moves your character, while the right analog stick moves the pole. When left to your own devices, vaulting toward the ball is effortless. In practice, four-player games of Super Pole Riders often devolve into a tangle of bodies all trying to get airborne at the exact same spot, resulting in numerous face-kicks and riders on top of opposing poles. This is frustrating if you're taking the competition too seriously, but the insanity is usually enjoyable thanks to how ridiculous this mayhem looks, if nothing else. So what if you're struggling to get the ball where you want it to go? It looks really funny while you're trying.

Hokra is another game that allows you to share a controller, which is good because it demands exactly four players. It is a very simple game both in concept and in visuals, since each player is represented only as a colored square. As two teams of two, you compete to get a ball into your team's colored scoring area, earning points as long as it's there until a set score has been reached. You do a lot of dashing, passing, and tackling along the way, making Hokra feel almost like a cross between football and King of the Hill. If you want a bit more complexity, you can enable an option to select from different player types that vary in strengths (one runs faster, one scores faster, and so on), and you can even build your own stages with an extremely easy-to-use editor.

Sportsfriends is great in large part because of its simplicity, which allows just about anybody to play its games, even if they have little or no prior experience with video games.

In Hokra, Dashing into enemies to steal the ball from them, then attempting (and often failing) to make a successful pass to a teammate, is reminiscent of early NHL video games, and even though teams are only made up of two players, you might find yourself and your teammate settling into specific roles. My wife, for example, wasn't adept at chasing the ball or scoring, but she found that she was good at protecting me by shoving other players away when I had the ball, like someone blocking in a game of football. Hokra may be simple, but it demands teamwork, making it an enjoyable game for pairs.

The most interesting and arguably most notable game in Sportsfriends, though, is Johann Sebastian Joust. In Joust, you and your fellow players need to stand up and move around, taking your controller with you. Your controller is very sensitive to motion--move it too quickly, and you're out of the game. The goal is to knock your opponents out by moving their controllers (or making them move their controllers themselves) while protecting your own. Unless you're content with having a slap fight while sitting down, this requires standing up and walking around, so a lot of open space is ideal. Whether you move your couch out of the way or leave it as an obstacle is up to you.

You don't need to (in fact, shouldn't) look at the screen at all, but you need to listen to the music coming out of the TV. The speed of the music changes as you play and dictates how fast you can move as well. When the music speeds up, your controller is a bit less sensitive, allowing you to move faster and quickly move away from or toward another player. If the music freezes, the slightest shake or tilt of the controller sets it off, demanding absolute stillness. For an interesting twist, you can have one person serve as the music's conductor, setting the pace of the game as everyone else plays.

Even the act of watching Joust being played can be both hilarious and fascinating. As skilled players move around each other, their movements can mimic a deliberate dance; competitors shift back and forth and side to side in an attempt to outwit and outmaneuver their opponents. Occasionally, the gloves come off, and renegade players decide they don't care about winning themselves and care only about tackling other players purely for the pleasure of it, which provides its own kind of lighthearted fun, even if it's not in the spirit of the rules.

Joust is also the only game in the collection where it really matters whether you're playing Sportsfriends on the PlayStation 3 or the PlayStation 4. Only the PS3 version lets you use your own custom music during the game, though the music available fits so perfectly that you might not want to use anything else. Both versions of the game allow you to use the DualShock 3/4 in addition to PlayStation Move controllers (which are the better option if you have access to enough of them), but the PS3 version allows for up to seven players at a time, while the PS4 version is capped at 4. On the flip side, the PS3 controller, which uses vibration instead of light to tell you when you're knocked out, is the worst of the available control options. In fact, while using standard PS3 controllers, you are locked out of specific gameplay options and tweaks that are available to you when using Move controllers. The PS4 controller has no such limitations.

Sportsfriends is great in large part because of its simplicity, which allows just about anybody to play its games, even if they have little or no prior experience with video games. But most of Sportsfriends' brilliance reveals itself in how enjoyable it can be whether you win or not. A non-gaming friend of mine vocalized exactly this fact as she fumbled her way through a match of Super Pole Riders, saying, "It's fun even when you lose!" as she laughed at the insanity that was onscreen. During games of Joust, my group of friends never kept track of who had won more matches. Every game was entertaining on its own, and good times were had throughout.

It's a shame there is no single-player or online content in Sportsfriends to keep you occupied when home alone, but it's the kind of game that takes full advantage of being exclusively local, and it's worth having friends over for. Each individual game can wear thin after extended play and may not be something you want to play for hours at a time, but there's so much variety between them, and so many options with which to customize your experience, that they can easily become a regular activity at friendly gatherings. Like darts or foosball, they may not be something to base an entire party around, but they're welcome diversions that anyone can enjoy, making Sportsfriends an easy recommendation provided you've got friends and controllers. 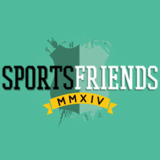 Britton Peele has only minimal experience playing sports, but he has a lot of friends. He played dozens of matches of every game in the Sportsfriends collection before writing this review, varying up the number of players throughout.