When you slam the pedal to the floor and kick one of these high-priced monstersinto first gear, you will feel like you're out on the track bumping andscraping with the big boys.

Remember Chuck Yeager's Air Combat? All right, maybe not - and even if you do you're probably wondering what on God's green earth a dated WWII air-combat game has to do with an auto-racing sim. So I'll clear things up for you with a little homespun aphorism that more game developers should take to heart: If it feels real, it is real. Chuck Yeager's flat polygons might look bland today, but when I saw them from a virtual cockpit eight years ago I felt as if I really were in the skies above war-torn Europe - a lot like the way I feel when I start a race of Sports Car GT and am nearly as excited, tense, and focused as if I were on the start line at Laguna Seca in an exquisite road racer.

Admittedly, Sports Car GT doesn't dish up the most jaw-dropping graphics you've ever seen (though they are good), and its modeling of car and engine damage will leave a lot of sports-car fans wishing that real life were as forgiving. But make no mistake: When you slam the pedal to the floor and kick one of these high-priced monsters into first gear, you will feel like you're out on the track bumping and scraping with the big boys. The 3D modeling here is so good, so convincing, that you'll find yourself in a severe fit of road rage when a driver cuts you off at a curve or some idiot spins out and blocks that perfect line you'd been following for the last three laps.

Fans of high-dollar sports cars will find that the menu in Sports Car GT is enough to set their mouths watering, with cars from BMW, McLaren, Porsche, Panoz, Vector, Mosler, Callaway, Lister, and Ford (the Saloon Mustang). And the settings are more than good enough for these fancy entrees - the game boasts world-famous courses such as MoSport Park, Road Atlanta, Laguna Seca, Donnington, Hockenheim, and Lime Park, along with a trio of fictional tracks that stand up pretty well on their own merits. Perhaps the reproductions of the real-life tracks aren't 100 percent genuine, but not a lot of folks are going to spot the discrepancies - and even if they did, they couldn't deny that this sim delivers the spirit, if not the letter, of what it's like to scream down these legendary circuits. And if you stick with it long enough, you'll start seeing famous names like Brabham, Pilgrim, O'Connell, and Bernard in the field.

I could rave about graphical effects like accurate mirrors, roiling smoke from spinouts, the way computer-controlled drivers have an uncanny tendency to make mistakes at crucial moments (just like we lowly humans do), or how the multitude of car setup options are both easy to understand and actually affect how fast your rig makes a lap. I could rattle on about how a replay reveals that your car's chassis shifts to reflect "inertial forces" (that means that you can see it rise up as you crest a hill or see it sway to the left or right when you're making a powerslide through a tight turn). But none of that means squat if the game doesn't deliver that precious adrenaline rush when you're out on the track - and if you don't get that feeling when you're driving in this game, you'll probably never get it.

Hold on a minute. I forgot to tell you how this beast that's been sucking up all my spare time actually works. Sports Car GT lets you hop into those fancy cars for quick races (a mere two cars and four tracks at the start of the game), enter a career mode (win money and add better equipment for handling, braking, suspension, etc.), or race against other people in a multiplayer game (but unfortunately there's no support for a matching service like the Internet Gaming Zone or even a chat area to exchange IP addresses).

Perfect as it seems, though, Sports Car GT doesn't get everything right. The bulk of the gripes stem from the fact that this game was made for both consoles and PCs (with different developers, however), and EA was apparently striving to make the two versions as similar as possible. You'll find many console-style quirks in Sports Car GT, some more annoying than others depending on your idiosyncrasies. There aren't global settings for generic stuff like graphics, sound, realism, replay settings, and so on (you have to adjust them for each driver you create); a huge majority of the tracks and cars are locked out until you log enough winning performances in career mode (unless you hack or cheat); and the lack of a true save-game feature means you can easily wreck a career unless you make careful choices when buying cars and equipment. The biggest disappointment is that unless Sports Car GT develops a dedicated fan base, the only official way to find opponents is by posting your name on EA's lame and relatively ineffective Multiplayer Matchup (I put my name up a year ago for Madden '99 and NHL Hockey '99 and have received only one response).

The good news is that Sports Car GT is so downright addictive that you can easily overlook these shortcomings. The game demands a lot in PC horsepower - my guess is something around a 333MHz with a ton of RAM and a really good 3D card - but if you've got it then you haven't got any reason not to give this game a spin unless you hate racing games. And if that's the case, then there's this old WWII flight sim called Chuck Yeager's Air Combat that you might want to check out. 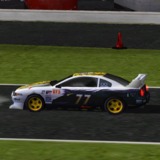