This arcade racer isn't a great fit for the system, but it can still be rip-roaring fun.

Speeding down an airport runway in a shiny red sports car is cool; speeding down an airport runway with an out-of-control aircraft thundering toward you is insane. That's the idea behind Split/Second, an arcade racer in which you wreck your opponents by triggering destructive hot spots scattered all around the track. The frequent explosions and tumbling debris are stimulating, but these electrifying jolts don't last. On consoles, the thrills were short lived but undeniable; on the PSP, the small screen and rigid controls make it difficult to slide your way past explosive events as they occur. Additionally, the limited local multiplayer is a real buzz kill, considering how enjoyable the pandemonium could have been with other players riding your bumper online. There's mirth and madness to be had with this shallow package, but the faults diminish Split/Second's fiery allure.

Split/Second is all about power plays. As you zip about the dozen-plus tracks (one of them exclusive to the PSP), you earn power by drifting, drafting, and getting air. Once you gain enough power, icons appear, indicating an opportunity to take down opponents by triggering a destructive event. If you press a shoulder button, a helicopter might drop metal pipes onto the course, a crane may go sliding across the roadway, or rocks and boulders may erupt from a canyon wall. Alternatively, you might trigger a bridge to be lowered or a door to be raised, opening up a temporary shortcut. If you trigger a level-two power play after completely filling your power bar, the devastation is even more dramatic. A chunk of roadway could collapse, changing that entire section of the course, or you might cause that enormous airplane to barrel menacingly down the runway. Just be mindful: You could fall victim to your own power play.

The first few times you unleash your newfound power on an opponent are breathtaking. The driving feels fast, explosions and screeches are loud and obnoxious, and if you're driving a lighter vehicle, the powerful shocks might send you careening out of control for a moment. You won't always steer clear of trouble, however. Depending on your position and the timing of your opponent's power play, there may be no evading that enormous obstacle that comes crashing down in front of you. If you've ever cursed the unavoidable blue shell in the Mario Kart series, the inescapable events in Split/Second might annoy you. More importantly, the controls and busy visuals don't always allow you the finesse to avoid certain crashes. You can use either the D pad or the analog pad to steer, but with both options, the controls don't offer the necessary responsiveness when traveling at top speeds. This issue is further exacerbated by the sheer amount of havoc and rubble. Given the system's small screen, it's often difficult to react to a power play or even a standard barrier until you're right upon the devastation, at which point, it's too late to do anything but yield to your impending doom.

The single-player campaign is structured as a reality television show on which you are contestant. Split/Second doesn't do a whole lot with the premise (you won't meet any slimy TV producers or peek in on any bloodthirsty viewers), but each episode's introduction and credit sequence is produced so well that you look forward to seeing what courses you unlock next. Episodes and one-off events include the usual races and elimination matches, all limited to eight participants. There are a few additional modes worth noting, however. In Survivor mode, you earn points by passing a series of semitrucks as you circle around the course. There's some fine print, though: These trucks are dropping explosive barrels onto the track. The more trucks you pass without wrecking, the faster you accumulate points. In Air Revenge mode, you must avoid a helicopter's missile strikes long enough to trigger a power play that deflects the missiles back toward the badly behaving chopper. There are also three challenges that let you practice drifting, destroy opponents to earn bonus time, and drive as one of those barrel-dropping semis. These modes don't provide incessant thrills, but they make for fun diversions nonetheless.

Yet even with the variety these modes add, Split/Second comes off as a bit basic. It doesn't take long to memorize each track, including power play locations. So while entire sections of the track may change if someone activates a level-two power play, the game doesn't offer as much flexibility and variety as MotorStorm: Arctic Edge. If you strip away the power plays completely, you have an unspectacular racer with few trimmings. You unlock new vehicles as you play with various stats relating to power, drifting, and so on, but you can't change their colors or otherwise customize their appearance. You earn awards for accomplishing certain goals as you play, but these have no impact on gameplay, and you can't show them off online. In fact, you can't do anything online because Split/Second's multiplayer options are limited only to local ad hoc races and eliminations. They are also limited to four players, which is half the number you encounter in offline races--and half the fun. At least you can fill out empty slots with AI racers, so you can experience a full four-player race even if you have only one other friend with a copy of the game.

In spite of the drawbacks of its own visual chaos, Split/Second looks terrific. A glowing sunset softens the view at the docks, smoke billows into the air, and from time to time, the camera slickly zooms in on the destruction you so expertly instigated. A few rare hitches aside, the frame rate keeps up its end of the bargain and has the game zipping right along. Nevertheless, it's hard to shake the feeling that Split/Second isn't a great fit for the PSP. The stiff controls and small screen make it a chore to react to explosive events as they occur, thus turning "fast and furious" into "fun but flawed." It's also a great pity the multiplayer options are so scant because annihilating human competition online would have made for a raucous good time. There are better racing games available on the platform, but that doesn't mean you should ignore Split/Second--just be prepared to exercise a little patience amidst the debris and detonations. 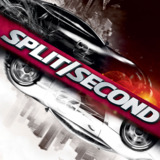