This arcade-style brawler actually sounds pretty wicked on paper, but unfortunately, the game itself is lousy.

Spikeout: Battle Street is trying very hard to kick it old-school. It hearkens back to a simpler time, when Final Fight and Streets of Rage were king, and walking around with the sole purpose of beating the living crap out of anyone in your way was the order of the day. This arcade-style brawler actually sounds pretty wicked on paper. It offers beat-'em-up gameplay with a large gang of playable characters to choose from and unlock. It lets you play alone through a story mode, as well as with up to three other players. And those three other players don't need to be in the same room, since Spikeout has cooperative play over Xbox Live. Sounds cool, right? Unfortunately, this would-be renaissance is marred by a pretty serious problem. The game itself is lousy.

Battle Street is an arcade-style game that breaks down into a couple of different ways to play. The story mode is a single-player adventure that takes you through the story of the always-capitalized place known as DIESEL TOWN. You'll start your quest as Spike Jr., a roughneck sort of guy who gets wrapped up in a full-on gang war. Well, make that a team war. The game seems to shy away from the G-word, instead talking about all the different teams running around the city. Like the classic film The Warriors, each area seems to have its own ill-intentioned sets and crews. Unlike The Warriors, you'll never get to see any baseballers with mime paint on. Bummer.

Story mode has you playing as different characters as you make your way through the game's areas. Along the way, you'll watch poorly designed cutscenes and listen to some terrible voice acting. Battle street mode eschews all the story junk and simply serves up the stages in order. This mode lets you play with up to four players either on one console or via Xbox Live. The difficulty seems to scale up slightly as you add players, but not in such a way that would maintain the game's same level of challenge. Also, story mode's much more difficult because it doesn't let you continue. Here, you can enable continues and tweak a few other settings as well. All this adds up to a game that you'll finish in two hours or fewer. After that...do it again. You do want to unlock every single character, don't you?

Well, let us answer that question. No, you don't really want to unlock every single character, because most of them are almost identical. There are some speed differences, and some are more powerful than others, but with the exception of a few unlockable bosses, your combo strategy remains the same. The game's combo attack asks you to rise to the challenge to somehow hit the X button six times in a row. It's rough, but, thankfully, each time you execute this extreme maneuver, you'll be rewarded by hearing a deep voice that deems it to be "Cooooooool." You can mix up your attacks a bit by working in the charge-move button, but if you do that, the game won't claim that it's cool. So forget it. The charge-move button lets you pull off launchers, stun attacks, and, if you charge it up all the way, a devastating blow that will kill most normal enemies. It's not all that useful, though. More useful is the sidestep button, which is tough to master but will let you escape from some attacks once you get good at it. All kidding aside, the game quickly boils down to button mashing, and most normal enemies can't manage to put up a decent fight. The game tosses lots of bosses at you, and they're only harder because they occasionally hulk up and become immune to your attacks, giving them free shots to grab you and fling you around...unless you've gotten good with the sidesteps.

Graphically, Spikeout isn't much to look at. The character models are pretty bad, the environments are drab, and the animation is as repetitive as the gameplay. The sound is "coooooool," though. Actually, no, it's not. The music is the sort of generic metal that you'd expect to hear in a budget action game like this. The sound effects are dull, and the voice work--which consists of the game shouting out "Here comes the boss!" and, of course, the weak stuff done in the story mode--is pretty bad. Presentation-wise, this would be a pretty-good-looking Dreamcast game. On the Xbox, it's fair, at best.

Spikeout: Battle Street will find its fans. People that are totally hooked on unlockables will find a lot of dudes to unlock here, and if you're an absolute fiend for cooperative gameplay, it's nice that the game offers it up, even though you'll only get about two hours of content. Unless you fall into one or both of these camps, Spikeout isn't for you. It's nice to dream that someday someone will be able to successfully bring the Final Fight concept to 3D. But as more and more 3D games totally flub the concept, one starts to wonder if maybe this is an impossible dream. 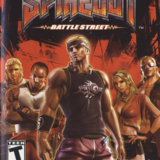 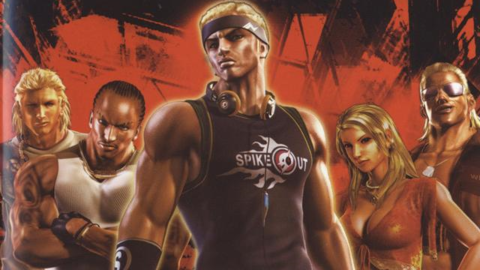 Get ready to engage in hand-to-hand melee combat against an army of enemies. Spikeout Battle Street puts you in the middle a gang war between Team Spike and Team Inferno.