Swinging through the air and pounding bad guys to a pulp are two of the things Spider-Man does best, and in Spider-Man: Shattered Dimensions, you do plenty of both while playing as four different versions of Spider-Man: Amazing, Ultimate, 2099, and Noir. Each Spidey is quick and powerful, allowing you to deftly evade your enemies and string together brutal combos using your substantial spider powers. At its best, Shattered Dimensions captures the energy and excitement of the webslinging superhero, and most of the time, you'll revel in your enhanced abilities. However, occasional locomotion snags and a creeping sense of repetition put a kink in Spidey's web, and the Noir levels aren't as strong as the others. Yet the excellent art design goes a long way toward smoothing out these wrinkles, and in the end, Shattered Dimensions proves itself a very entertaining adventure.

The story begins with a powerful magical artifact being shattered. As the walls of reality begin to crumble, Spider-Men across the four different dimensions must hunt down the shards of the artifact under the guidance of the mysterious Madame Web. Her disembodied voice gives our heroes plenty of opportunities to make wisecracks (not that they need any encouragement), and each Spidey has a distinct personality that helps each dimension feel unique. Bantering with villains opens up more opportunity for humor, and along with some genuinely funny jokes, there are a lot of enjoyable pop culture references and nods to the Spider-Man canon. The dialogue sometimes tilts too much towards the cliche, and there are certain times (especially boss fights) when Spidey or Madame Web repeat the same quip with alarming frequency. Fortunately, those instances are infrequent, and dialogue generally does a great job of capturing Spider-Man's signature mix of determination and impertinence.

When it comes to letting you do the things that a spider can, Shattered Dimensions does an impressive job. You run and jump with an enjoyable sense of agility and make frequent use of your webzipping and webswinging abilities. Most areas are littered with well-marked locations that you can quickly zip to, and most spaces allow you to webswing whenever you want, regardless of whether or not you are surrounded by tall buildings. For the majority of the game, you feel like you can move around with the freedom and speed of Spider-Man. You can swoop across the battlefield, kicking enemies and dropping to the ground to unleash a furious combo. Or you can stay out of reach, crawling along the walls and grabbing objects to throw at your foes. Or you can webzip from body to body, kicking off of your enemies' chests and flinging them around with your webs, barely stopping to touch the ground. Spider-Man is a kinetic superhero, and Shattered Dimensions captures this sensation very well.

There are some instances, though, when movement can be problematic. Sometimes the level design prevents you from using certain abilities, and it's not always clear when this restriction is in effect. But learning the hard way isn't too painful because once you've fallen too far, a prompt appears allowing you to slingshot back into the action with no penalty. There are areas where this safety net doesn't apply, and there are other hitches that occasionally cause a webslinging attempt to misfire or a jump to go awry. And though crawling on walls is a clever and often essential ability, turning corners and maneuvering onto ceilings can cause camera problems. While you definitely notice these moments of imperfection, any moments of frustration are overshadowed by the many moments of electrifying superhero action.

For all the fun you can have moving around, there's also plenty of combat to enjoy. You start with a fairly basic move set and expand it throughout the game by spending spider essence. You earn this resource by defeating enemies and completing the addictive level-specific challenges. In addition to new costumes and improved character attributes, you can purchase new attacks, throws, counters, and combos to beef up your arsenal to impressive levels. Unlocking new abilities is rewarding, and it ensures that you have a steady supply of new ways to flex your pugilistic power. This helps stave off the creeping sense of repetition that plagues some levels, as does the array of enemies stacked against you. Enemies vary between dimensions and levels, keeping you on your toes, and the various bosses usually require some figuring out (a task Madame Web is happy to help with). Taking down a big bad enemy is satisfying even when the fight mechanics aren't particularly clever (which they sometimes aren't), and the occasional first-person punching sequences are a simplistic yet invigorating diversion.

Among Amazing, Ultimate, 2099, and Noir, there is a substantial amount of variety in Shattered Dimensions. As you play the campaign, the levels unlock in groups of four (one per dimension), offering you your choice of how to play through them. Each Spidey sticks to his own dimension, and there are some meaningful differences between them. The hard-hitting web powers are the highlight of the Amazing dimension, where you pound your enemies with web hammers and fists while wearing the classic red suit. Ultimate's lashing tentacle attacks spice up the combat in that dimension, and the more sarcastic tone makes these levels some of the funniest in the game. 2099 is set in a towering futuristic metropolis, which offers plenty of opportunity for free-falling sequences, and Noir takes Spidey back to a shadowy, dark world full of gangsters and tommy guns. Both Ultimate and 2099 feature a heightened combat mode that you can trigger to do extra damage and slow down time, respectively. These variants work well because they are relatively subtle--the solid core action remains very similar across Amazing, Ultimate, and 2099.

Noir is a different story. Rather than going in webs blazing, Spidey must crawl through the shadows and stealthily eliminate his enemies almost all the time, offering little opportunity for the fluid brawling of the other dimensions. Silently picking apart an enemy patrol is satisfying, as are some of the vicious silent takedowns. Yet the Noir stealth gimmick grows tired after a while, and your relative fragility becomes frustrating. It diverges from the brisk pace set by the other dimensions, and anyone who enjoyed last year's standout superhero game, Batman: Arkham Asylum, is likely to look at Noir as a shameless, not-so-successful imitation of that game's stellar stealth.

But if you're going to steal, steal from the best, and the Noir dimension definitely has some sneaky appeal, part of which is fueled by the excellent art design that brings every universe to life in a unique and vibrant way. The lively visuals and diverse gameplay help keep Shattered Dimensions moving along at a good pace, and you'll likely finish just shy of the 10-hour mark, having enjoyed your journey. After all, it's a lot of fun to feel like a superhero, and Spider-Man: Shattered Dimensions creates this feeling very well. Small frustrations aside, this is not only a great Spider-Man game, it's also an entertaining action game that anyone with a penchant for superpowers can enjoy. 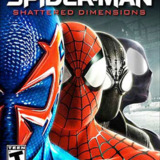 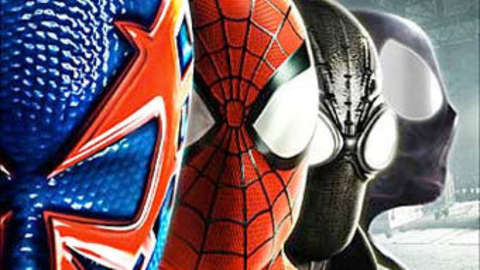 Swing your way into action to help restore reality with your friendly neighborhood Spiderman.