Slick production values and cooperative play distinguish this beat-'em-up from the rest of the pack.

In Spider-Man: Friend or Foe, a mysterious villain is terrorizing the world with robots infused with symbiote goo taken from the meteor that brought Venom to Earth. To make matters worse, he's also slipped some of Spidey's most dangerous adversaries a mickey, transforming them into his loyal henchmen. So, in this 3D beat-'em-up for the Nintendo DS, your job is to knock some sense into the zombified bad guys, locate this new villain, and thrash hundreds of robots along the way.

The game itself is your typical beat-'em-up. Good old Nick Fury, the bossy commander of S.H.I.E.L.D., sends Spidey from one level to the next. In those levels, you have to free hostages, deactivate bombs, and beat the living daylights out of the groups of robots that appear at regular intervals. A few security minigames involving the touch screen serve to break up the monotony, as do boss battles featuring such familiar adversaries as Doctor Octopus and Sandman. Spidey can swing through the air, climb up walls, and use his webbing to snare or swat enemies. But you'll mainly find yourself mashing the punch and kick buttons to unleash the combinations that will get those pesky robots out of your face. A handy collection of power-up items, such as damage doublers and health kits, also help you out along the way.

One way the game distinguishes itself from all of the other comic-based beat-'em-ups we've seen on the DS is with its cooperative nature. When you play solo, there's a computer-controlled sidekick helping you out. Early on, it's Black Cat. Once you wake the bosses out of their stupors, though, you'll be trading blows alongside the likes of Doc Ock, Green Goblin, Blade, Sandman, and Venom. There's even a multiplayer option that lets you play through individual levels or the entire story with any of your friends who happen to own the game. One of you controls Spider-Man, while the other controls the sidekick of your choice.

It also doesn't hurt that the presentation is solid. The 3D environments depict buildings and streets located in such places as New York, Tokyo, and Paris. They exhibit a good amount of detail, including boxes and trashcans that you can break, as well as give you plenty of space to wander. Often, doorways and rooftops lead to secret areas containing stashes of coins or items. A particularly sweet aspect is the way the environment is split logically between the two screens. When you're at street level or underground, the characters occupy the lower screen. However, if you walk up some stairs or crawl up a wall, the view will switch to the upper screen. As for the characters, they're modeled on their Marvel Ultimate designs and pack enough texture-mapped polygons to be easily recognizable. A few attacks play out choppily, but, for the most part, the animation is smooth. The audio is a generic mix of dramatic music and fisticuff sound effects, though there are a few voice comments. Furthermore, the story scenes that appear between levels employ lengthy spans of recorded dialogue.

Besides the main story mode, which takes about five hours to complete, you have the option of enjoying your favorite red wallcrawler in small doses through the free play, survival, and boss battle modes. The repetitive nature of combat may not entice you to spend a ton of time playing these modes, but it's nice to have a choice, especially because you can opt to play as whichever character you like. It's worth mentioning that playing cooperatively with another player is much more involving than playing with a CPU sidekick that's not programmed to tag team the bad guys. For that reason, if you can manage to link up with a friend, you'll both have more fun and get more out of your purchases.

Although Spider-Man: Friend or Foe doesn't offer anything above and beyond what you've seen in similar games, it does present all of the usual beat-'em-up staples in satisfying fashion. Comic book fans that simply want to kick some butt and admire their favorite spandex-clad superhero in the process will enjoy this one. 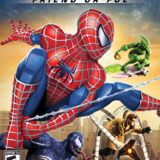