Spider-Man: Edge of Time tells an enjoyably absurd time-hopping tale, but stepping into the tights of its two heroes doesn't feel as empowering as it should.

With great power comes great responsibility. But along with the burden of protecting the innocent from those who prey upon them, the power that comes with being Spider-Man would surely bring a great deal of fun. To swing through the air as you hunted evildoers would be liberating and exhilarating, and using your webs to restrain and subdue criminals would be immensely satisfying. Unfortunately, while its flair for the dramatic keeps it aloft, Edge of Time doesn't capture the joy that should come with such fantastic abilities. Instead, it serves up an experience that often feels as narrow and limited as the air ducts through which you spend much of your time crawling.

You play as both The Amazing Spider-Man, Peter Parker, hero of present-day New York, and as Miguel O'Hara, Spider-Man of the year 2099. When Walker Sloan, a scientist at megacorporation Alchemax, hops back through time to the 1970s and founds Alchemax long before it's supposed to exist, the consequences are immediate and dramatic. Present-day New York instantly transforms into a bleak-looking place, and Peter Parker goes from intrepid Daily Bugle photographer to Alchemax employee. O'Hara and Parker join forces across time to undo the damage with their superpowers and brisk repartee. Their banter is one of the better things about Edge of Time; Parker's so-bad-they're-good wisecracks and O'Hara's more serious demeanor make for an interesting contrast, and energetic voice acting helps to make their interactions believable, even when nothing else about the story is.

Unfortunately, although their personalities may contrast, playing as the two Spider-Men feels very similar. As both Parker and O'Hara, you unleash combos by rapidly pressing one button, launch enemies into the air with another, and fire web shots with a third. There's some fun to be had in clobbering the thugs, robots, and mutants that try to put a stop to the Spideys, and using their super-speed abilities to attack enemies while those enemies continue to attack where you were standing an instant earlier is empowering. But although you unlock new moves and power up existing ones throughout the course of the game, the combat doesn't evolve in any meaningful way. It never requires much skill, so defeating your enemies doesn't remain rewarding. It also doesn't look great. Spider-Man should look stylish as he's putting the hurt on the bad guys, but Edge of Time goes overboard with the flashy effects. Color lines follow O'Hara's attacks, for instance, and Parker's hyper-sense ability creates a trail of ghostly impressions of him. In the heat of battle, these dazzling distractions sometimes overshadow the action they're intended to emphasize.

Despite the simplicity of its combat, Edge of Time stays interesting as a result of its storytelling. As the Spideys communicate across time, you often see what one Spider-Man is doing in the corner of the screen as you control the other. Thanks to some sort of hastily explained wormholelike phenomenon linking their timelines, the actions of one Spider-Man can have an immediate effect on the surroundings of the other. For instance, if O'Hara is overwhelmed by mutants in the future, Parker can save him by destroying the failed experiments lab in the present. That's the magic--er, science of temporal causality. You must frequently race against time to save your fellow Spider-Man, and the picture-in-picture presentation generates a good deal of tension; the image of Peter Parker being slowly crushed to death by closing walls makes for a strong motivation to hurry up and rescue him. But this concept of temporal causality also feels like a missed opportunity. You might wish you could tinker with the timeline yourself and do things in one time to see how those actions affect the other, but you never have the freedom to do so. Everything that happens is determined by the rigid confines of the story, and you're powerless to affect that course of events. In a game that's all about how time can be shifted, this feels oddly limiting.

Like the story, the environments are also restrictive. Of course you can webswing, and it's exciting to speed through the air as you hustle from one location to another while the pressure is on. And a number of sections in which you must maneuver O'Hara to avoid hurtling into obstacles as he free-falls are dramatic demonstrations of his superhero skills. But the narrow corridors and other confined spaces in which you spend much of your time mean that you rarely have the liberating opportunity to swing any which way. It's disappointing to be cast as these webheads only to find yourself unable to enjoy the sense of freedom that their signature ability should allow for. You can almost always zip right to a highlighted perch with the press of a button, and you make frequent use of this ability to get around, but Edge of Time doesn't fully take advantage of Spider-Man's most defining power. In addition to being restrictive, the locations in which the game takes place are mostly dull industrial hallways and metallic chambers, with little visual variety.

Edge of Time has other frustrations as well, including a poorly designed battle in which you must fight the same boss three times in a row, and you must repeat the entire process from the beginning if you're defeated. And start to finish, the game is only about six hours long. A harder difficulty mode, challenges to complete, alternate suits to unlock, and other bonuses give dedicated wallcrawlers plenty to do, but the combat is too simple and the movement too limited to make these undertakings appealing. Spider-Man fans may find putting up with the game's flaws worthwhile just to enjoy its story, but most players will find that Edge of Time doesn't make your spider sense tingle quite enough. 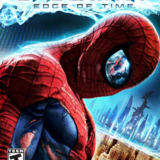