Die-hard webheads will no doubt complete the game several times to unlock all the hidden costumes and comic book cover galleries.

Spider-Man 2 Enter: Electro is a changing of the guard of sorts--like in the transition of Tony Hawk's Pro Skater to the Game Boy Advance, a formidable Neversoft title has fallen into the hands of Vicarious Visions. Following up last year's formidable effort is a game that suffers from many of the same problems of the original but succeeds in making effective use of the Marvel Comics license and in providing a few hours of solid entertainment.

Spider-Man 2 Enter: Electro puts you in the role of the familiar wallcrawler, complete with superstrength, spidey sense, webshooters, and the ability to stick to any surface. Your webshooters return with the ability of producing a huge amount of webbing that can be used to tangle enemies, swing from buildings, encase your fists in webgloves for added punch, create a protective webdome, and shoot a powerful impact-webbing projectile. Once again, the impact webbing, when used correctly, is incredibly powerful, although Spidey's new ability to snag enemies and drag them face first into the floor is fun enough to make it the stealthy henchman-eliminating move of choice. Along the way, Spider-Man will also find power-ups to boost his powers, like the ability to shoot electrified and frozen webbing or the chance to don the trusty Spider armor. Bringing the Marvel Universe to life are Spider-Man's constant humorous banter, the inclusion of a number of classic Spider-Man foes, such as the Sandman and Electro, and the unmistakable voice talents of Stan "The Man" Lee, who acts as the episode-to-episode narrator. Subtle references to icons of Marvel Comics culture abound--such as the Mighty Thor, Captain America, the X-Men Blackbird, Avenger Quinjets, the Fantasticar, and many more--and will bring a smile to any comics junkie.

To fully make use of Spidey's abilities, Beast, Professor X, and Rogue of the X-Men allow you full use of their Danger Room facilities, where you can perfect long-distance webswinging, use of the nifty zip line, and even bone up on stealthy maneuvering. The Danger Room looks very much like the VR sequences from the Metal Gear Solid training modes, although a silhouette of what is apparently the New York City skyline frames the outer walls. The Danger Room also lets you enter an instant action area, where endless henchmen spawn in a simulation city block and where you can hone your combat abilities. Completing each of the training sessions also unlocks a timed training mode, in which high scores can be saved.

One of the problems that plagued the first Spider-Man PlayStation game was the camera, which struggled to keep up with the wallcrawler in any position he would find himself. Once again, it isn't the Sandman or Hammerhead who is the player's worst enemy--it's the camera. Crawling on the roof of tunnels isn't as practical as running, due to the awkward and incredibly unintuitive controls that take over when your perspective is shifted, and certain boss battles against the more maneuverable enemies are a chore, not because of their inherent difficulty, but because they become laborious--half your time is spent trying to get them centered onscreen. The camera also glitches occasionally, particularly when you need to activate levers or buttons during a battle by zooming in on a very tight close-up of the lever in question, leaving you without the ability to see what's going on for a few seconds while the camera resets. This can be incredibly annoying if you bother playing on the more challenging difficulty settings.

Despite the imperfections of the game engine, Spider-Man 2 is more than capable of providing a few hours of solid, Marvel Comics-driven action. The puzzles and fast-paced action sequences you need to conquer are both challenging and original. Spider-Man's battles against some of his most familiar adversaries are engaging and require certain amounts of strategy, as well as fast reflexes. None of the tasks presented are tedious, although some may seem too challenging--until you can discover the proper approach and the most effective solution to the situation. What does remain constant is the steady pacing of the enjoyable, pulp storyline and the simple fun of each successive encounter.

It's somewhat disappointing when, only three to four hours into the game, you've reached the final climactic battle. Die-hard webheads will no doubt complete the game several times to unlock all the hidden costumes and comic book cover galleries, as well as explore the "create a spider" costume maker, but most fans will be more than satisfied with a weekend rental. 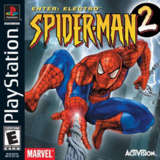