Even though it's not quite up to prevailing standards, Speedball 2100 still packs quite a bit of wallop.

A century from now, unrestrained hostility will be a thing of the past. Aggression won't be enacted on the battlefield, but on the playing field. It is this plot, corny as it may be, that underlies Take 2 Interactive's Speedball 2100--a game that bears striking resemblance to the modern-day sport of rugby. Nine players on each side take turns passing a ball downfield, battering opponents while attempting to land a goal. Since halves are short--only 90 seconds each--the emphasis is on aggressive ball movement. To that end, the goal is simple: bash, bludgeon, and maim your way to victory.

There are many ways to play Speedball 2100. You can duke it out for solo honors in the game's knockout and cup leagues, vie for managerial experience through the game's player and team manager settings, or tackle a friend in a number of two-player competitions. For variety's sake, Speedball 2100 also lets you rename and recolor your chosen team, acquire players through midseason trades, and purchase a plethora of performance enhancements, such as shoulder pads, body armor, and brain boosters. You're going to need all the help you can get, as the money you earn and the players you acquire are your only means against all 16 of the game's increasingly difficult teams. The game puts up a fight, that much is certain, but you can overcome it--if you're dedicated.

Everything about Speedball 2100 suggests speed. Control is efficient. The analog pad controls movement, while throw, jump, and elbow actions are intuitively available via the controller's face buttons. Halves are short, and there are no penalties, which leaves both sides free to run the court. Similar to rugby, your teammates are evenly spaced into defensive, offensive, and midfield lines, enabling you to recover and launch the ball from the goalie to center in under a second. If that weren't enough, the game also sports a number of in-game power-ups, such as turbo boosts, opponent stunners, and strength modifiers, all of which further drive the pace. A typical run up the court lasts barely five seconds, give or take a few seconds to grab a power-up or snag some freebie points off the wall.

For all the fun that it is, Speedball 2100 isn't perfect. Although gameplay is fast, there isn't much strategy involved. Powering up your players is the only way to stand against stronger opponents, while a distinct pattern for running the floor all but eliminates risky play options. The CPU also has a nasty habit of sucker punching your offscreen players, a behavior that can become frustrating over time. Graphically, the game is acceptably plain. The field and players upon it are composed of the typical array of polygons and textures that you've probably come to expect from 3D sports games, but overall texture quality and animation is below that of what we're seeing from current PlayStation releases. The game's audio is quite nice though, with an assortment of injury samples, groans, and audience comments elevating an already sadistic game to new heights.

Even though it's not quite up to prevailing standards, Speedball 2100 still packs quite a bit of wallop. Its single-player modes are challenging and fun, while the humorous pace of two-player matches gives the game a type of longevity that's often underrated. As part of Take 2's budget line of games, it's also hard to overlook the game's "bang for the buck" ratio. 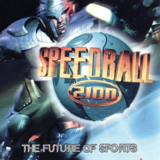 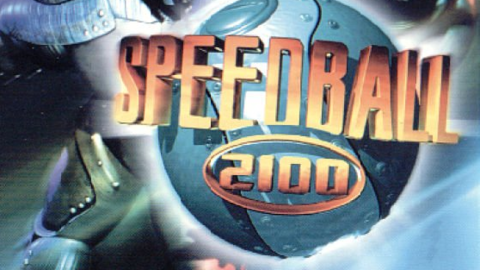 Even though it's not quite up to prevailing standards, Speedball 2100 still packs quite a bit of wallop.