Even though Speed Kings doesn't stray very far from the Burnout 2 formula, it's a solid racer that does a great job of conveying an insanely fast sense of speed and requires you to think and react in an instant.

Racing game fans familiar with Acclaim's previous arcade racer, Burnout 2, will find that aside from featuring motorcycles instead of cars, Speed Kings is a lot like that game. In fact, you might even go so far as to say that Speed Kings is simply Burnout 2 with motorcycles, but there's nothing wrong with that, since more of a good thing is hardly something to complain about.

Comparisons aside, Speed Kings can be best described as a fairly traditional arcade motorcycle racing game with some unconventional gameplay elements, like the ability to lay your motorcycle down on its side at high speeds to slide underneath semitrailers and other obstacles. The game's three single-player modes include single races, meets, and grand prix, which allows you to try to become the true speed king over the course of a string of races on 18 different tracks that are unlocked as you progress through the game. Speed Kings features 22 motorcycles (some of which must be unlocked) based on real-world road, street, and custom bikes. While the motorcycles don't actually feature the official names of their real-world manufactures, motorcycle aficionados won't have any trouble finding their favorite bikes in the game. While online play would have been a great addition here, Speed Kings features a variety of offline multiplayer modes for two players, including single race, tag, a trick challenge, a best-of-three championship, and more.

Speed Kings' gameplay and control setup are well done and fairly intuitive, especially for anyone who sits through the game's tutorial. The responsive control and physics of the motorcycles actually feel akin to those found in MotoGP for the Xbox--which, for those who have never played that game, are very good. One of the most refreshing aspects of Speed Kings is that the game gives you lots of jumps and objects such as traffic to not only navigate around, but also to jump over and slide under. For instance, as mentioned above, the game gives you the ability to drop your motorcycle on its side and slide underneath objects such as gates and semitrailers. If you're quick enough at the controls, you can slide underneath an obstacle without losing much speed. As in Burnout 2, the more hair-raising a performance you turn in, the more boost you get, which allows you to go even faster. In Speed Kings, you also have the ability to perform a limited number of tricks, such as wheelies and handstands. Challenges will pop up from time to time, asking you to do things like pop a 1,000-foot wheelie. Accomplishing these tasks unlocks new bikes. The game's AI is pretty standard for a racing game. The pack keeps up with you, ensuring races stay competitive.

Visually, Speed Kings looks good, even though a few individual elements--like some of the environmental textures and the game's vehicle models--aren't the greatest ever created. These flaws are easily overlooked, though, since you'll spend most of your time riding too fast to get a close look at anything. The sense of speed conveyed in Speed Kings is fantastic, and the game uses a blur effect when you kick in your boost that definitely gives you the impression that you're going way faster than you should be. It's worth mentioning that the game's frame rate hiccups a bit on every platform when there are a lot of vehicles involved in an accident, but it's usually a pretty minor skip. The Xbox version looks sharper than the other two versions, and makes better use of particle effects, as well.

In the audio department, Speed Kings has a decent array of sound effects and music. The engine sounds, crashes, and tire squeals are all appropriate. The music in Speed Kings is surprisingly low-key, but this prevents it from becoming a distraction and actually helps you focus on the tracks.

In the end, even though Speed Kings doesn't stray very far from the Burnout 2 formula, it's a solid racer that does a great job of conveying an insanely fast sense of speed and requires you to think and react in an instant. The game's controls, presentation, and gameplay modes offer enough depth and variety to warrant a purchase for fans of arcade racing. 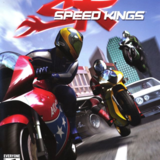 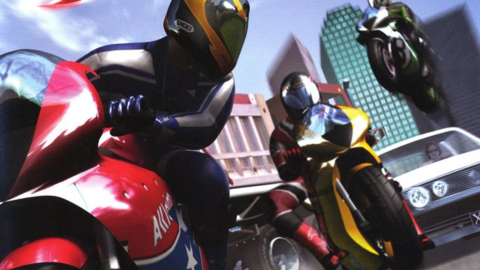 Even though Speed Kings doesn't stray very far from the Burnout 2 formula, it's a solid racer that does a great job of conveying an insanely fast sense of speed and requires you to think and react in an instant.