As a scavenger sim Spectrobes absolutely succeeds, but scouring every inch of planet after digital planet will quickly wear thin for most people.

Billed as Disney's first original video game-only intellectual property, Spectrobes has been brewing for several months now as a series of short, full-CG animated webisodes, which can be found on Disney's Web site or your local video-sharing site. Each of the six episodes is about two minutes long--you can go check them out now, we'll wait. Perhaps indicative of Mickey's plunge from Steamboat Willie to the glamorized little rodent he is today, and as you'll plainly observe from the webisodes, Spectrobes lacks the charm you'd expect from a game built around collecting and fighting with cute and/or imposing creatures. Further, the painfully tedious task of searching out these creatures, coupled with the different, though ultimately cumbersome, battle system and the unimaginative story, means Spectrobes is mostly just a boring game.

From a company that once prided itself on creative, imaginative characters, Spectrobes packs a remarkably sterile and dispassionate story. You play as Gallen, a young, and therefore brash, space cadet who's apparently a fan of monkey business. Your partner is Jeena, a smart and by-the-book straight shooter who regularly encourages Gallen to refrain from said monkey business. There's also a gruff old commander, who occasionally chastises Gallen for engaging in the monkey business, and a sagacious yet mysterious advisor known as Aldous, who, as it turns out, doesn't seem to have an opinion on Gallen's monkey business. On a routine mission, Gallen and Jenna discover an unconscious Aldous in an escape capsule, and after reviving him, they find out that he is the sole survivor of a long-dead solar system that was destroyed by the planet-devouring Krawl. The Krawl are now knocking down your system's front door, and as fate would have it, Gallen alone is capable of commanding the only creatures able to harm the Krawl, these creatures of course being the spectrobes. Unfortunately, the entire spectrobe race is in a state of fossilized hibernation, buried deep underground in the various planets of your solar system. Thus, it is your mission to find, awaken, and train the spectrobes, and then use them to eradicate the dervish Krawl hordes.

It's a stereotypical setup for sure, and it's only made worse by the context in which it's told. The dialogue between characters comes off as very formulaic, and the occasional attempts at personality seem to be waiting for a laugh track to cue up. Also, the character stills that accompany the dialogue aren't emotive or expressive in any way. Despite being vibrantly colorful, the spectrobes lack distinction, being neither Pokémon cute nor Transformers cool. Likewise, the environments you'll traverse all feel barren and devoid of life, mostly because the only things you'll encounter are the twirling Krawl vortexes and the occasional large stone. Cities have a few random inhabitants, who stand around spouting out typical RPG rubbish ("Boy, when I grow up, I want to be a hero just like you!"), and since you only ever need a few services from any given city, they feel empty and entirely too large. The Nintendo DS displays your surroundings on both of its screens, so you do at least have a wide field of view that really captures the nothingness all about you.

As for the gameplay, well, have you ever gone to the beach and stared at that one guy wearing hiking boots, tube socks pulled up midcalf, 1980s-style jean shorts, and huge, conical headphones, who's carrying a DIY-looking metal detector and tugging a small, red wagon to haul his horde of loot? Well, if you feel some special kinship with that dude, or you are that dude, then the vast majority of Spectrobes' gameplay may appeal to you. Key to the story is that the spectrobe population in its entirety lies dormant and buried, and the only way to defeat the Krawl infestation is to find and awaken these critters and then feed them precious stones, which you also need to find. Only baby spectrobes are able to detect fossilized spectrobes and minerals, and you'll use the one that initially follows you around by pressing on it with your stylus. The rub here is that the circumference on your search is quite small, so as long as you're interested in collecting these items, you have to slowly and methodically work your way across the sparse, empty environments. There's a sense of pleasure that accompanies all treasure-finding expeditions, but the problem here is that it's hard to get excited after unearthing the same fossil or mineral for the umpteenth time.

Once you've found a fossilized spectrobe and some minerals, you take the spectrobe back to the ship to awaken and evolve it. If you're even remotely interested in appearing like a normal, well-adjusted human being, you can finagle blowing into the microphone to awaken the critters (yes, this is the option that makes you appear normal). However, blowing won't always cut it, so you'll occasionally have to resort to the developer's intended method of hitting the right sound volume with your voice. This method can be all kinds of embarrassing, and it really hampers Spectrobes' on-the-go portability. Once you've awoken your spectrobe, you can either use it to find other spectrobes or stick it in your incubator with some minerals so it will evolve. Spectrobes are capable of progressing into an adult and evolved form, which is accompanied by an appearance change as well as increased attack, defense, and hit-point levels. The incubator also features one of the most annoying and persistent sound effects in existence, sounding a bit like when you force air from out of your cheek--over and over again. In fact, the game features several ridiculously annoying sound effects that just don't stop, and they're a serious detriment to the otherwise quite nice soundtrack.

Occasionally you will need to fight the Krawl, though the battling definitely plays second fiddle to the scavenging. There's a sense that the developer, Jupiter, wanted to do something different with the battle mechanic, and while it's more complex, it's not particularly strategic or engaging. Upon being sucked up by a Krawl whirlwind, you and two of your spectrobes square off against three Krawl in an enclosed space. Your battle formation resembles a weird kind of foosball line, where you are flanked by the two spectrobes and everyone moves concurrently with one another. The reason for this rigid structure is that you'll control both spectrobes and yourself with just the one D pad, using the right shoulder button to attack with your right spectrobe and the left shoulder button to attack with your left. Gallen himself also has an attack, which you can use by hitting X, but regardless of the weapon he has equipped, his attacks are mostly ineffective.

Each spectrobe has a different attack, so you can use some strategy in trying to pair, for example, a close-range area-of-effect attacker with a long-range, straightforward attacker, but any kind of strategy you could conceivably come up with is nullified by your CH, or charge, attacks. By holding the A button, Gallen can charge up his CH meter, and once it's full, you can hit both shoulder buttons to unleash a fairly powerful and unavoidable attack that hits every enemy onscreen, while treating you to a pretty cool-looking attack animation. It's a slightly slower, though very effective, strategy, and it pretty much trivializes every single battle encounter in the game. What's more, this attack is as powerful with adult spectrobes as it is with evolved ones, so not only is every other battle nuance rendered meaningless, but the entire evolution mechanic is as well, save from a strictly aesthetic standpoint.

Aside from the fossils and minerals, you'll occasionally find a cube that will make Aldous giddy with excitement if you give it to him. You probably won't share his enthusiasm, however, as these cubes primarily just give you information that is readily accessible in the game's quite thick manual. Some of these cubes are useful, though, in that they enhance your lab equipment, and you'll also need to find certain ones to open up the game's online functionality. Though the game doesn't feature online battles, you can trade spectrobes or go head-to-head against a friend's lineup locally. Additionally, packed in with the cart are special hologram-style cards that you can input into your spectrobe collection once you find the appropriate cube, and you can also download a certain number of extras per week using Nintendo's WFC service, again, once you've found the appropriate cube. These features are actually pretty neat, and the cubes are prevalent enough that you'll be able to unlock them fairly easily.

Spectrobes feels as if it were devised in a boardroom by people more interested in turning a profit than making a game. From its marketing-centric webisodes to its canned story to its unremarkable gameplay, it's an extremely blasé experience all around and quite noticeably lacks any form of a creative spark, which you'd really expect to be present in this type of game. What you're left with is a game that desperately wants to be your friend, but lacks enough redeeming qualities for you to really take interest. 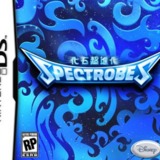 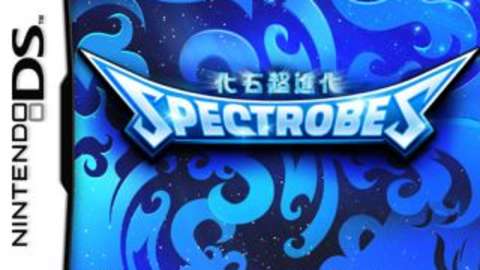 Spectrobes is an anime-inspired action/role playing game, where two junior Interplanetary Patrol officers must save the galaxy by awakening and training prehistoric Spectrobes to help battle the evil Krawl.