A striking vision of a devastated Dubai plays host to murky morality and banal gunplay in Spec Ops: The Line.

Spec Ops: The Line is a game rife with contrast. In the sandstorm-wracked city of Dubai, refugees huddle in crude shanties erected in the opulent atriums of luxury hotels, and soldiers construct rough outposts in swanky rooftop clubs. On these makeshift battlefields, most of your time is spent casually gunning down hundreds of enemy combatants, but your squadmates still argue passionately over the value of one anonymous virtual life. Mechanically, Spec Ops is an utterly commonplace third-person shooter, but narratively, it strives to raise philosophical questions and put you outside of your comfort zone. These contrasts create some intriguing moments, but they are too often muddled by mediocre execution.

The environmental design is one of the highlights. A fierce sandstorm has left Dubai with an entirely new geography, one defined by sliding dunes and sandy canyons. Trapped by the swirling debris, the citizens are forced to create makeshift shelters amid the towering skyscrapers, carving out settlements in the luxurious wreckage. Walk just past the glittering peacock statues and extravagant mosaics to find rickety cots, shabby walls, and dirty sheets.

A battalion of American soldiers have taken up residence here too, following their failed evacuation attempt, and their military outposts add an ominous air of conflict to the landscape. The artifacts of the aborted exodus tell a story too; cars are abandoned, belongings have been left behind in a hurry, and desperate pleas for help adorn the walls.

These striking scenes are punctuated by the politically charged graffiti that some stranded artist has created around the city, anonymous accusations that target the suffering of the people (smiling images of hotel guests with their eyes hollowed out) and those who helped exacerbate an already bad situation (a skeletal news anchor holding a smiling yellow puppet). The disparate architectural and artistic threads intertwine to create a fascinating landscape, one that is a pleasure to explore despite the merely decent production values.

Unfortunately, no such creativity is found in the actual combat. Gunplay in Spec Ops: The Line is a simple matter of taking cover, popping out to shoot enemies, and advancing to more cover from where you will shoot more enemies. The guns you fire are a fine military array of assault rifles, shotguns, sidearms, and heavy weaponry. The enemies you fire them at return the favor vigorously but lack the kind of artificial intelligence that can liven up a firefight. There are a few neat opportunities to destroy barriers or ceilings and let the environment kill your foes, but the bulk of the time you're serving up headshots to anything that moves (and getting a nice slow-motion flourish for your troubles).

This humdrum gunplay is paired with slightly clunky movement mechanics, which might see you failing to sprint on cue or melee attacking a low barrier instead of vaulting over it. Spec Ops does not compare favorably to its genre peers when it comes to maneuvering around the battlefield, but these shortcomings are rarely an issue in the single-player campaign. In the competitive multiplayer modes, however, they become a hindrance exacerbated by your relative fragility. Some interesting map layouts, a light class system, and a nice array of objective-based modes can create some fun conflicts, but the creaky locomotion makes it unlikely you'll feel invested enough to make a significant dent in the bevy of unlockable weapons, perks, and gear options.

The campaign itself can be completed in under seven hours, and the journey you undertake is inspired by the novel Heart of Darkness, in which a man journeys upriver into the jungle to seek a powerful and enigmatic character who may or may not have gone off the deep end. In Spec Ops, you play as Walker, one of three Delta Force soldiers who arrive in search of Colonel Konrad, an American commander who took his battalion to Dubai against orders in hopes of saving the people trapped therein. It quickly becomes clear that the situation in the city has deteriorated drastically, and there are numerous factions struggling for survival.

Though your mission is to rescue survivors, the first humans you encounter are hostile. A failed attempt at communication leaves you no choice but to fight back, and this pattern repeats throughout much of the campaign, establishing one of the main narrative contrasts of Spec Ops. You're there on a rescue mission, but you just can't seem to stop killing people.

Sometimes, you are given a choice. Try to rescue the potentially friendly operative, or save two innocent civilians? Who is guilty, the man who stole water for his family, or the soldier who administered harsh justice? There are no right or wrong decisions, just a difference in who dies and how. These moments shine a spotlight on your squad chatter as Lugo and Adams chime in on the situation you are presented with. They generally argue different sides and react strongly to what you do, but your character's response is almost always to bully them with talk of "doing what's right" or "doing what you had to do." Then it's back shooting the guys who are shooting at you and exchanging profanity-laden victory shouts. The moments meant to encourage reflection fade to the background, drowned out by the overriding narrative justification of self-defense.

There are some story moments that make an impression, however. There's a humorous homage to the similarly inspired movie Apocalypse Now, and a number of licensed songs are piped in to the battlefield to set an appealing fatalistic tone. Both of these examples are the work of the mysterious Radio Man, a disembodied and incongruously jocular voice emanating from speakers rigged throughout the city. Other moments force you to look at the horrors you've wrought, but these often feel cheap because you so rarely have a choice in your action. It's not until late in the campaign that Spec Ops gets more daring and disruptive with its storytelling, but by then it feels like too little, too late.

The disconnect between the gameplay and the narrative elements of Spec Ops: The Line is numbing, which makes it more difficult to contemplate the murky morality of war in the way the game wants you to. There are some intriguing things to be teased out of your adventure through the lovely ruins of Dubai, but the contrast between ambition and execution makes the experience as unsteady as the shifting sands.

View Comments (16)
Back To Top
6.5
Fair
About GameSpot Reviews 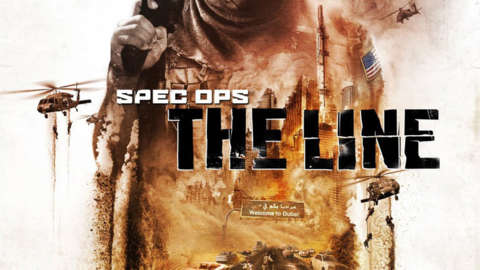 Conflict rages and morality is murky in this third-person shooter set in disaster-struck Dubai.