Spec Ops: Stealth Patrol isn't the most spectacular game on the PlayStation, but it does deliver enough basic fundamentals like control, gameplay, and presentation to make it easily worth its special US$10 price tag.

Spec Ops: Stealth Patrol is a game that tries to mix the realistic art of tactical warfare with elements of an action game. The end result is a game that looks and feels like a typical action game but punishes you for trying to play it as such since the AI and missions require you to use more tactics than bullets.

At the beginning of each level, you must choose two rangers to control from a team of five. Each of the rangers is skilled in various forms of combat - some are better with a shotgun at close quarters while others are better suited to sniping from a distance. Understanding each of the ranger's special skills makes choosing the correct team for a particular mission one of the keys to success in the game.

Each of the five stages in the game takes you to a different location where there is a political situation that needs to be rectified by force. Once your rangers are on the scene, it's up to you to guide the two-man team to victory. Some missions are the standard "shoot everyone you see and go home" type, while others are more involved and objective-based. Some of the more difficult missions require you to slip behind enemy lines and plant explosives while avoiding enemy detection.

Controlling the game is a little more difficult than most other action games since you must manage both members of your team. You can direct the two rangers on a mission in two different ways. One is to simply push a button that switches your control between the two soldiers. While neat at first, this method tends to wear thin after a while since you have to keep switching back and forth to move them along. The other way to control the team is to simply issue one of four orders to the other ranger like "follow me" or "move up." While controlling two different soldiers is interesting and one of the best things about the game, the best way by far to play Spec Ops: Stealth Patrol is to play in the game's two-player, split-screen co-op mode with a friend. This co-op mode is similar to Perfect Dark's two-player mode in that each one of the players can play independently of one another at the same time in the same mission. You and a friend can choose to complete the mission objectives separately or attack the enemy in the standard two-man cover formation.

Visually, Spec Ops: Stealth Patrol is a little on the weak side. The 3D models used for the soldiers are fair, but some of the animations - such as performing rolls and other maneuvers - ruin the illusion of reality. The environments are simple in design and look. The textures used in the game don't look very convincing, nor do the majority of the 3D models used for many of the vehicles and objects within the levels. The biggest problem with the Spec Ops visuals, however, is the terribly short distance at which the level draws in before your character. As you progress through a level, you must constantly keep checking up ahead with binoculars or a sniper rifle to see if any enemies lie in your path. If you don't keep checking, you are sure to come into contact with an enemy soldier who not only appears out of thin air right in front of you but also starts shooting as soon as he does.

In the audio department, the game has several things going for it. The music has a broad range that really adds tension and suspense to some of the missions where stealth is the key. In addition, most of the sound effects of the various weapons and explosions come across fairly realistically.

At any rate, Spec Ops: Stealth Patrol isn't the most spectacular game on the PlayStation, but it does deliver enough basic fundamentals like control, gameplay, and presentation to make it easily worth its special US$10 price tag. 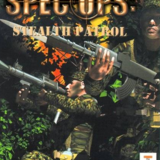